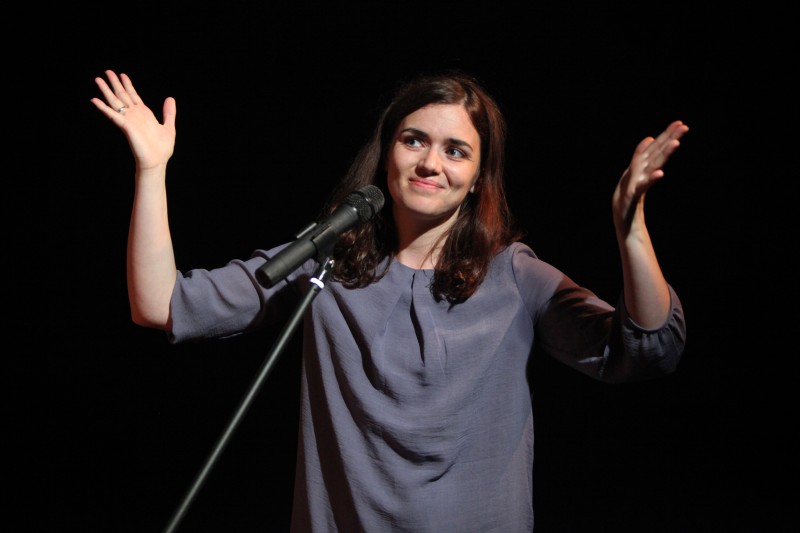 Leaving Home Party is the story of Catherine Ireton’s journey from Ireland to Scotland, a neat little show about the search for the self. The story is told mostly through song while Ignacio Agrimbau provides a masterful musical accompaniment.

The music in the piece is mostly excellent, leaning heavily on musical theatre in its composition and arrangement; Agrimbau spends most of his time on a keyboard. But when he picks up a peculiar array of world instruments the tone lifts and takes on a more unconventional folky sound that really makes the piece shine. In particular, a song about Ireton’s mother’s mother’s mother had the audience tapping along.

Ireton’s delivery is very charming; when she isn’t singing she talks us through her journey, smiling at us warmly through dulcet Irish tones. She does very well to engage us throughout, even walking through the audience at one point to sing directly to us, which was surprisingly effective in breaking up a method of delivery that wanders the borders of repetition.

The real sensation in the show is Ireton’s voice, effortlessly beautiful with a pure and clear tone, it really is a pleasure to listen to. It evokes  shades of smoky jazz mixed with a traditional Celtic sound, and it is the thread that the whole piece hangs on.

Unfortunately the same cannot be said for the narrative: it is a piece distinctly lacking in drama. As Ireton tells us more than once, ‘This is not an epic,’ and she’s right. In spite of her charm there is little in the journey from Ireland to Scotland that is gripping, either in the physical task or the internal struggle she experiences as she tries to find her place in the world.

In addition the over-abundance of singing and rhyme eventually creates a distance between audience and performer. The form is rather repetitive, and, considering the fact that a party is promised in the title, it’s a real shame there’s a missed opportunity for a shared celebration. By the end there is a lack of any meaningful connection between us, and it’s difficult to empathise as we get yet another song in a similar vein to those that preceded it. I was desperate for something I could relate to, for an interesting perspective to shed light of understanding on her situation.

But nevertheless, this is still a charming and honest piece of theatre. For beautiful music done well seek it out, for a more moving experience seek elsewhere.