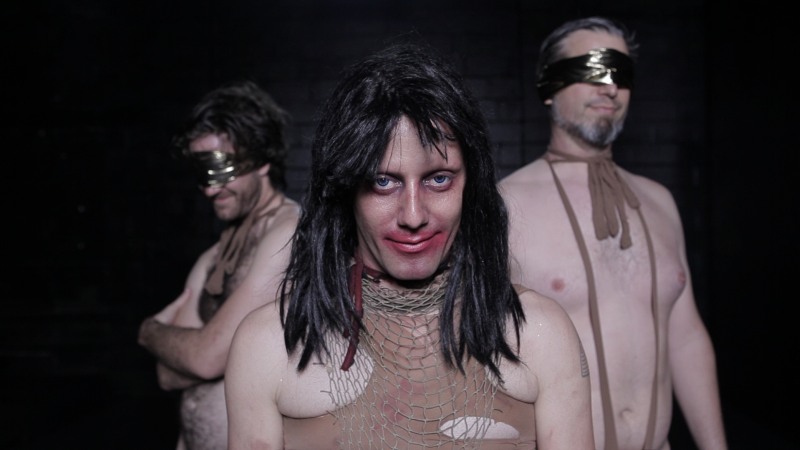 Though I am not the target audience for this, I soon became it, tuned into a youthful frenzied display of the almost indescribable. The Christeene Machine, marketed as ‘a gender-blending booty-pounding perversion of punk dragged through a musical theatre gutter’ is a journey into a liminal space that is abject and transforming. I want to talk about it as art rather than the music gig it might simply be. Here we have a clever assemblage of rap, electro-R&B, a kitsch long-lost love song, rock anthems, political ragings, and a very funny ironic number I Am The New Celebrity. All laced together with a beautiful positioning of the performer with the audience: one that threatens but ultimately loves you and reassures you that everything is okay, apart from if you leave prematurely and noisily in which case you can ‘Fuck off’ because ‘you need to look after your pony better.’ Herein is one fundamental theme – the inner creative flame that burns in each of us and is brightest within us as children. The Christeene Machine is fuel for this flame and an intelligent challenge to those of us who might want to remain too safely inside the box, never wishing to venture back into the deep dark woods of teenage exploration. The Delilah that is Christeene and his/her two cohorts C Baby and T Gravel are terrifically exciting performers of epic proportions. It’s exhilarating to witness their home–made hickster parade.

The Christeene Machine might be read as a play on the notion of the transforming and redemptive power of the sage, shaman, soothsayer, or a kind of positive child-catcher and, dare I say, Christ figure. We are the children or teens who have followed this crazy Pied Piper into the underworld rivers that s/he describes: that place deep down, under there, below where the green man on the exit sign sends you, in the ‘underneath’, both of the body and of the Underbelly. This is powerfully playful rite-of-passage stuff. It is a challenge to technocrats and capitalists, who, as Christeene from Austin Texas rages, have lost touch with themselves. Christeene, in amongst the stories and demonstrations of his/her own galloping pony, berates those up above, chained to their mobile devices and unable to experience the skin of the person next to them. Here we are in what I would call the underworld of folklore with creatures that can see the folly that humans are blind to.

This Dionysian rampant riot is a challenge to consumerism and an overt reclamation of the right of the artist to channel the pathological into creative excessive expression, a theme that has pervaded the festival in the five days I have been writing about work I have seen. Great stuff.

The Christeene Machine is shortlisted for the Total Theatre Awards 2014 for Experimentation & Innovation.