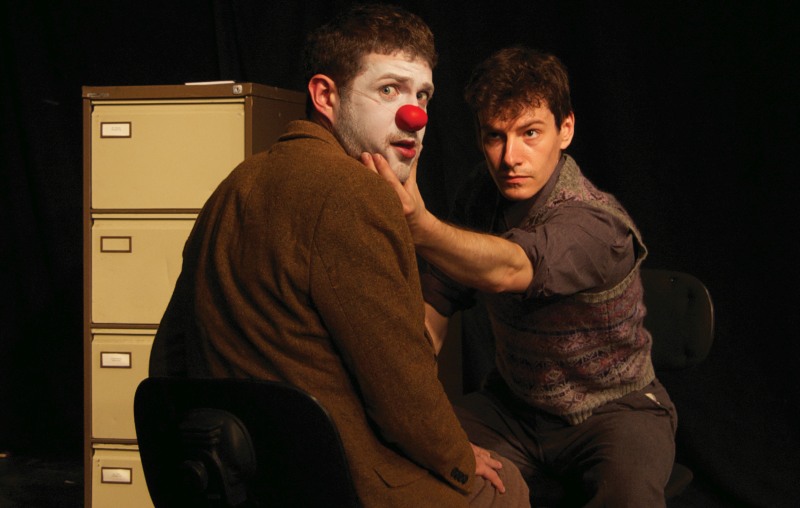 The first moments of this show present the audience with a simple set up: straight man and fall guy. The fall guy looks like a clown, with a white face and red nose. The straight man is being serious at a typewriter. The company wants to explore the Manichean struggle between mirth and melancholy using these two beings and their relationship as revealed through absurd play, references to classic clown numbers, old jokes and bitter rivalry. The action leads towards the characters’ transformation, which in turn points towards the conjoined nature of happiness and sadness. They give the simultaneous impression of being the same person, a ventriloquist and his dummy, and two old, broken, codependant performers.

This is not a clown show. It is a theatre show which uses clown. Apart from one genuine moment where a performer accidentally opens a door and finds a beautiful seam of genuine, hilarious play (pretending to be sucked out into the real world) everything feels stilted. Clowns play with a genuine connection to the audience and each other, they find out what the audience wants them to do in that moment so their game, text, and movement are not as important as staying present and in contact with everyone in the room. Thus listening is the most vital skill; if you broadcast your ideas but don’t listen you have no idea what you should do next, you have no idea what might be funny. Gurning and grimacing for no reason like an insane impression of a silent film actor is not clown just as pretending to play is not clown.

Both performers though, have the potential to be hilarious: there are hints of so many styles of clowning – simple, tragic, pathetic, boss, and august. When they actually play as clowns in connection with us and each other we erupt in laughter and when that laughter dies we are given the impulse to reflect on the actions which ended that moment of happiness. Sadly this happens but once as it is clear that the director doesn’t have a solid enough understanding of clown as a process, and cannot help her performers find or maintain that state.