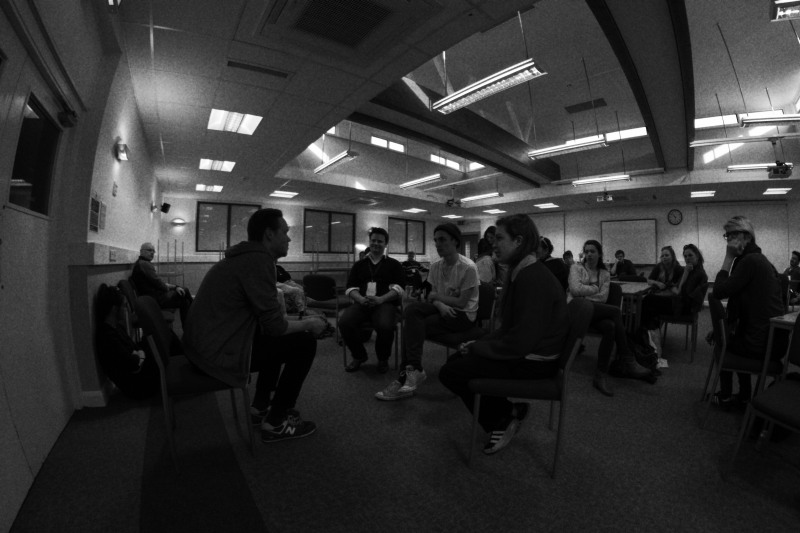 There is nothing more satisfying in theatre than a number of recognisable traditions filtering through and cohering into a completely fresh and new artistic sensibility. Discernible influences on the young company Barrel Organ include Forced Entertainment, Sarah Kane and possibly some representatives of the current trend of interactive theatre pioneered by the likes of Tim Crouch and Ontroerend Goed. Nonetheless, they do produce something completely authentic and compelling, on their own terms.

This is yet another piece at this Fringe happening on a bare stage and blurring the line between the stage and the auditorium. As I’m sure the word has gone around already, I’ll start by saying that this is a show in which the performers are dotted around the auditorium throughout. They will have inconspicuously queued together with you, carrying their own coats and bags (and even, in some cases, fringe passes), and they’ll catch you by surprise at any point during the hour by suddenly speaking to you from a seat nearby. The eight-strong ensemble have all got a monologue each, but the way they work together is by tuning in with each other anew each day to produce what they call a new ‘cut’ of the play. The charm of the piece therefore is mostly in the interplay between the pre-rehearsed and the spontaneous, although clear rules of the game which are not known to the audience are evidently at play. The way it usually happens with companies emerging from university courses nowadays, this young ensemble are driven by a strong sense of familiarity, complicity and shared working ethos, rather than, say, commitment to training or acting excellence. But they have a strong artistic core consisting of writer Lulu Raczka and director Ali Pidsley, who have deservedly won two of the company’s four awards at the National Student Drama Festival this year. Another unexpected plus is the way in which this piece offers a deep and honest insight into the concerns of the youngest generation of British adults. Teetering between frequent references to psychological distress, disaffection and thrill-seeking, the play’s central themes are well encapsulated by a character who at the end of today’s ‘cut’ introduces himself as Nobody – a university graduate, who has never been in love, never been angry and, as he says, never really done anything. A different day may well have yielded a different reading, especially as one of the characters dropped out of the game this time without giving us her story. Perhaps this is a way this piece provides us with some hope before it lets us out. What is certain however is that these young people are doing something worth keeping an eye on.