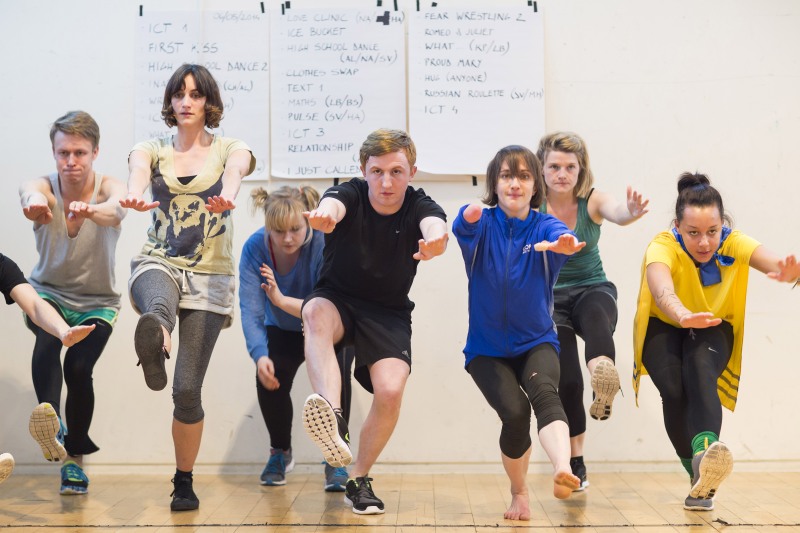 Secret Theatre – the Lyric Hammersmith’s ensemble project – has gone from strength to strength since its launch in the autumn 2013. They have recently received additional funding which will enable them to continue and in the meantime they have also made it to Edinburgh, with not one, but two shows. The other is a new play by Mark Ravenhill. This one, though it began its life as a writer-led project, has ended up being devised by the ensemble and, in true European fashion, dramaturged by writer Joel Horwood. Sean Holmes directs, and his ensemble is young and exuberant and growing in confidence.

Dressed in gym gear, the actors are lining the back of the stage, a list of shorthand notes on each side reminding them of what the running order of their scenes will be. Presumably they have a variable repertoire. The rehearsal room spirit pervades the general format and aesthetic of this piece and there is a whiteboard in the background where show after show, the actors try to ascertain what the piece is about at two particular moments in each show, which seems to consist of two roughly symmetrical halves. Past attempts which remain recorded on the whiteboard have included love, honesty, being kicked in the balls, exhaustion (more than once). The latter might be the result of the methodology deployed in defining the show’s theme – a wrestling match between the protagonist and his/her colleagues, with the aim of taking off as much of each other’s clothes as possible.

Cara is our protagonist tonight – there is an element of chance here too, as the protagonist is picked out of the hat by the audience each night. Attempting to work her way through the obstacle course of a show, Cara decides that her own wrestling match is about survival in the first half, and exhaustion and friendship in the second. Although the show is evidently a string of rehearsal room games put together in order to create a rhythm and showcase the inner chemistry of the group rather than tell a story or make sense in any way, it is hard for us to ascertain what the rules of the games are and so we are kept at a slight distance from what is going on conceptually. This is a pity, because the charm coming from the stage is so infectious, we want to be more involved. But our patience is eventually rewarded in one simple way. The initially fragmented group of people comes together in perfect harmony, showing us that the title of the piece is both a literal description of the protagonist’s journey and a metaphor for the kind of artistic endeavor devoid of the benefit of collaboration. Ultimately, this is a timely celebration of the ensemble way of working and a fitting tribute to the achievements of Holmes’s project so far.