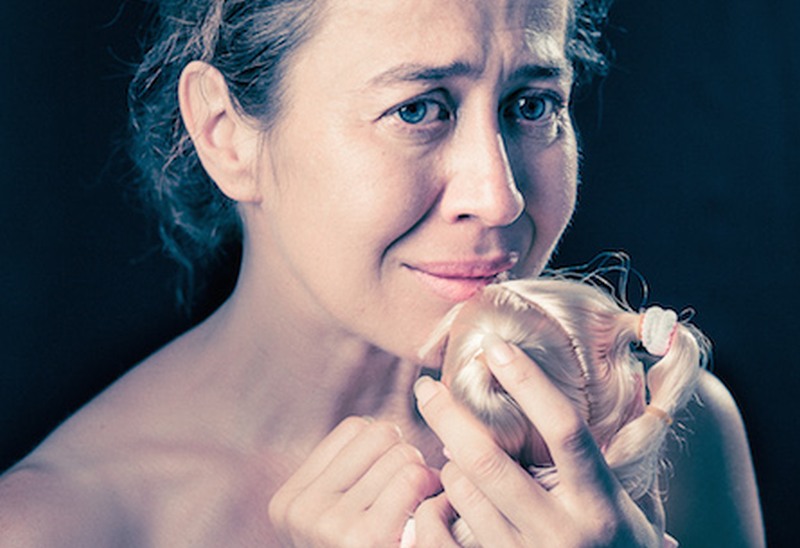 The Pulitzer prize-winning poet Anne Sexton was abused by her father, unloved by her mother and sexually exploited by her therapist, all of which probably contributed to her depression and ultimate suicide in 1974. This we learn through the unsettling work God Is In My Typewriter. Grim stuff. Performer Anna Mari Laulumaa from Finland presents in two main styles in this piece: an entrance-exit motif derived from Butoh movement, bookending a psycho-physical/naturalistic performance for the main body of the work.

A pink-frocked woman makes a slow Kabuki-like entrance rising on tiptoes and descending to the floor, demonstrating great core control, then breaks into a more daily and drugged state flopped over a typewriter. She is desperate. It is her suicide day. She is dead. Then she begins to tell you her life story. We hear about Sexton’s fraught childhood starved of attention and her dawning adolescence which reveals an inexplicably insatiable sexual appetite, a violent marriage fuelled by alcohol and infidelity, and the aversion she has to being controlled by the people closest to her – her parents, her husband, and her children Linda and Joyce, the latter named thus because Anne could then call her ‘Joy’. There was no joy in Sexton’s life. There was frustration, exploitation, abuse, depression, confusion, and a sense of inconsequence. Her first therapist introduces her to poetry because her psychological assessment deems her creative. The poetry becomes a tonic, but ultimately creativity is not her cure. Following divorce from an apparently long-suffering husband, she kills herself leaving behind Linda, a child whom she would speak to from the grave. We don’t know what happens to Joyce. It seems Laulumaa has connected to the daughter Linda through the process of devising the piece.

Otherwise, there is no joy in this show, though there is frequently an expression of the thrill and promise of a potential lover. Ultimately it is a work about depression and Laulumaa, so clearly attached to her material, performs it with sincerity and heartfelt empathy for her subject. There is some strong physicality here and she is able to embody the fragility of the psyche she is investigating. Yet there seemed to be aspects of this life that were missing as material to give air to the personality and to allow other perspectives on characters and story. I wondered about Anne’s friend, Maxine: this was an important character expressed through one or two lines only and this did not seem enough. One subtle touch was the way Laulumaa shunted her chair from left to right as the piece progressed, to indicate her awkward progression through Anne’s painful historical timeline. However other props, such as the cuddly toys she used to represent her children and husband seemed ill-considered from a design perspective, lacking the distinctiveness of Laulumaa’s costume, a well chosen pink dress that was both historically appropriate and evoked both the troubled child and the party going prize-winner. On balance, this was a convincing and strong solo performance demonstrating physical commitment and some skill.