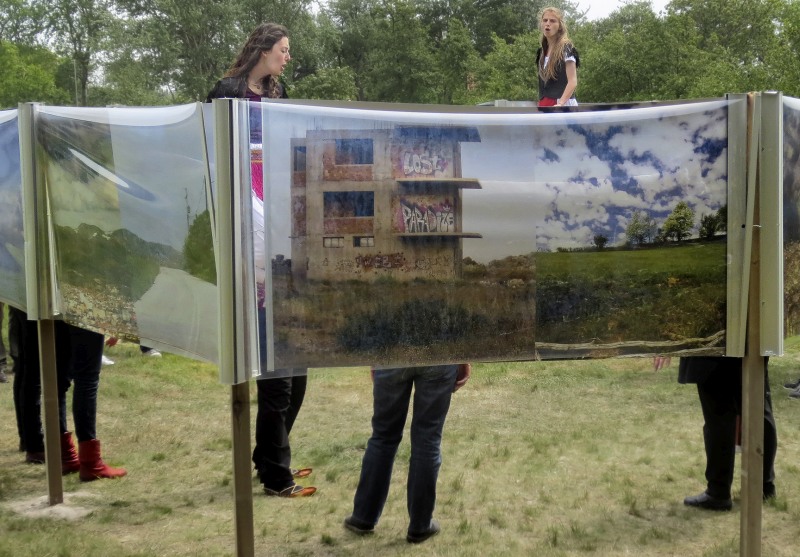 Invisible Walls, performed by Kosovan company Teatri ODA, is an affecting piece of physical theatre resembling an applied form of theatre-in-education that was particularly prevalent in the eighties and early nineties. It is performed outside, and the Soviet-style towering buildings which make up the Summerhall courtyard space act as walls around the audience at the beginning. Here we fill in passports, which double up as programmes containing the stories of the performers’ experiences of entrapment during the Kosovan conflict, and their subsequent frustration and aspirations, as would-be refugees and migrants from that country. The short journey from passport control to the entrance into the performance area brings the audience to a tight circular space surrounded by linked banners. Whilst the overall sense of the piece is absolutely poor theatre – minimal everything – the print work within the programme and the backdrop within the piece are given special attention, resembling commissioned graphic art works.

The piece seems an ideal pop-up performance for touring and public spaces and it is told with simplicity in the language of movement, folk song and dance, together with a simple use of objects and storytelling. Invisible Walls draws you in. The audience are cast as a clutch of disorientated people visiting ‘our country’ (Kosovo) and bewitched by the singing, dancing, and warm welcome from the actors.

All the performances were assured and passionate and one felt a strong sense of authenticity and personal contribution within the material. And Fringe festival participants are willing to play: they enthusiastically join in the harmless rituals of interaction and dancing and are willing to help the performers tell their story. But here the history intimated in the passports and the potential for deeper participation ends. Unfortunately the short duration of the piece, 30 minutes, allows no possibility for a dramatic climax or sense of deeper connection beyond that emoted through repetition and simple insistent refrains. Phrases such as ‘Have you seen my brother?’ and ‘Who cracked the bottle?’ in multiple languages are dovetailed with moving song, but the limitations of language and suggestive storytelling compel us simply to witness these snippets and gestures about social fragmentation and incarceration.

So how might this go further and take you more deeply into what feels like its ambition to empathise with these situations of disenfranchisement? Unless you read the passport stories carefully before the show you may miss much of the detail because of the literal and sketched style of presentation. Designed for public spaces the short and easily portable piece must be a gift for towns and cities seeking a festival piece that concerns itself with the challenges of territory, identity and homeland.