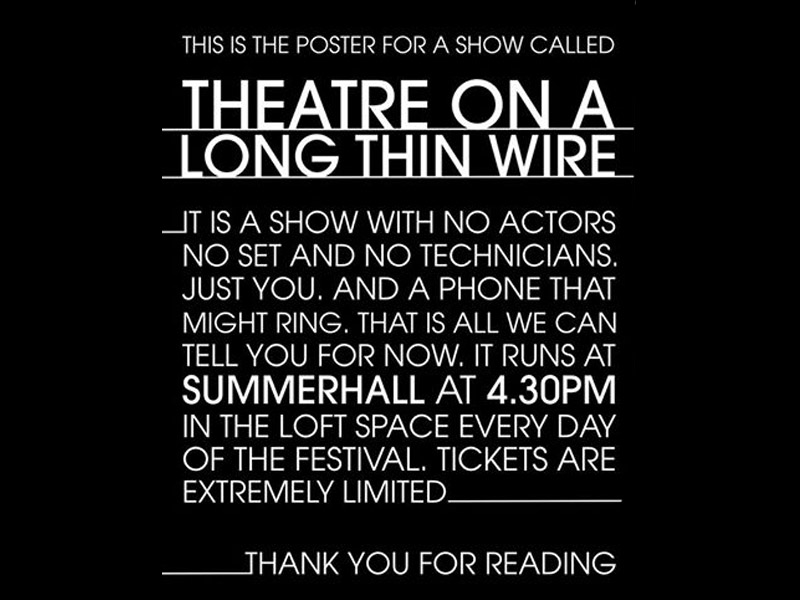 Twelve strangers stand in an empty room right in the eaves of Summerhall. Nearby is a faded-looking chair with a mobile phone resting on it. Suddenly, the phone rings, and so begins our journey, facilitated by the whims of a voice on the end of the line. Theatre on a Long Thin Wire is a fascinating exploration of group psychology and the notion of individual responsibility. Our choices as an audience shape our fate to an extent. We stage-manage our own production, grouping ourselves around the person who has answered the phone and responding to relayed requests compliantly.

To reveal too much about where this voice originates from, or how it finally implicates us in a disturbing denouement, would be to take away key elements of surprise vital to the audience experience. Suffice then to say, the voice takes us on a journey that demands that we work together as a group, firstly in innocent ways, and later a little more darkly. I felt a real fascination with the psychology behind this production; on one level individual behavioural responses are challenged – who will be brave enough to answer the phone first, and how will they handle the resultant conversation? – and on the other there is a gradual but compelling sense of deindividuation that grows as we begin to act more as a (possibly too compliant) group.

The immersive, risk-taking nature of this work, even set as it is within an empty space and simple framework, makes for a compelling experience. However, I was not wholly convinced that the woman who answered the phone first off and again at the end was not actually a conspirator. There was much in her slick delivery and ability to pace the action that spoke of an actor associated with the production. If this was the case, though, the contribution nevertheless served to move the narrative on with skill.

The build to resolution is structured to prime a sense of maximum investment in the voice’s fate; we know that we are waiting for something significant to happen. The final event when it comes is surprising, facilitated as it is by those in the audience who are willing to go along with it, and left me with enough to ponder for a long while after, for I may have refused to participate in the final action, but should I have tried to change it? This genuine sense of moral culpability is a real strength of the production, which taps in to the current zeitgeist for experiential and immersive work with real verve.