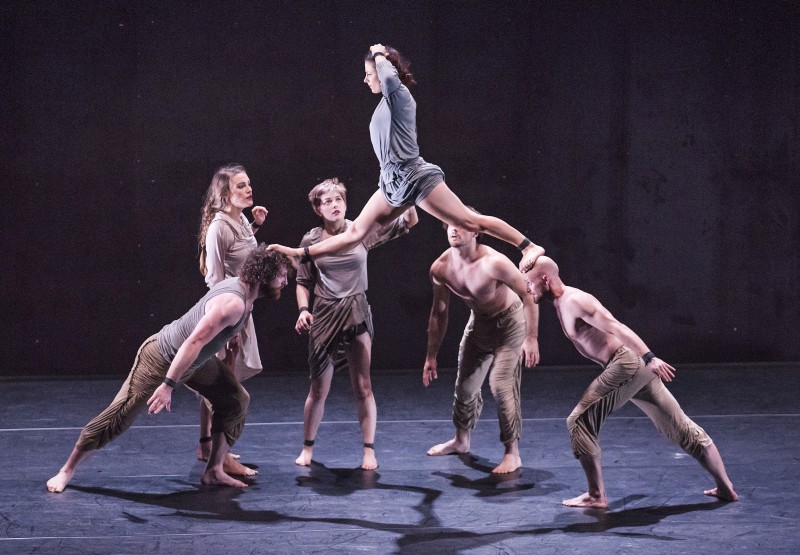 This atmospheric response to Monteverdi’s opera Il Ritorno d’Ulisse in Patria is the latest UK premiere from prolific Australian circus company Circa. A regular visitor to London’s Barbican, it is Circa’s first visit as part of the London International Mime Festival.

The Return sees six acrobats (three men and three women) share the roles of ‘a man trying to get home, and a woman waiting for a man who hasn’t arrived.’  By turns reflective and explosive, it surfs the different emotional territories that these two agonisingly pertinent scenarios conjure up.

A long steel wall bars the figures from the upstage area, in a striking echo of the walls erected by Greece, Bulgaria, and Hungary over the last three years as a means to prevent the migration of refugees from the world’s war zones. But Circa aren’t concerned with attempts to scale the wall, or to glimpse the other side; rather the six figures gaze out into the auditorium. More accurately their gaze is fixed beyond the auditorium – a thousand-yard stare confronting the world outside, as if somewhere out there lies the person or place they seek. This is an evocative proposition, and one that provides some fertile territory for the acrobatics, contortion, and acro-balance that dominates the work. This reliance on the capacity of the acrobats, without apparatus, speaks both to the displaced’s loss of material possessions and their loss of stability and security.

There is one scene though where the acrobats turn to apparatus. In turn, each of the three women take their place on one piece of apparatus. First a suspended cube, then a pair of straps, and finally a set of multiple hand-balancing canes. The first two sequences build in intensity, clearly becoming a means to articulate the internal world of the women, but it is the final sequence, with Nicole Faubert twisting and turning slowly atop the canes of various heights, that crowns this sequence. As Faubert teeters and stretches into space, the two other women curl up, immobile at the base of the canes, staring up as if shell-shocked. Here it is the crushing emptiness of waiting for the unknown that stands out.

The Return blends its dynamic acrobatics with a series of extracts from Monteverdi’s opera, played and sung live from a small platform to the side of the stage. Interspersed amongst these extracts are electronic compositions by four contemporary composers in response to Monteverdi’s work. Thus the musical world of the piece shifts between richly nuanced melodies and striking sonic landscapes.

The Return is early into its life in Circa’s repertoire and the acrobats are yet to settle into the ebb and flow of the emotional worlds of each scenario. What is clear about the work is the way in which the emotional resonance of each ‘act’ is clearest in the moments when the acrobatics turns away from explosive movements and towards an attempt to ‘still’, or resist the flow of movement. Most strikingly this occurs when two acrobats, one-by-one, slowly and unsteadily stand one on top of the other, then to be joined by a third, on top of the second, to form a tower of three acrobats. By denying themselves the momentum that might usually be used to arrive in position in this trick the acrobats make it harder to achieve. The result is that the tremors and movement of the actors forced by their attempts to retain their balance becomes more pronounced – the strain visibly heightened by the slowness of the movement. In this moment the tangible strain of the trick achieves a degree of poetry that unlocks the struggle of the dispossessed.

As with many physically taxing performances there is a tangible tension in seeing, up close, the bodies of the performers under stress, a tension that much of the clarity of the world hangs upon. But I wonder if this is also a show that might benefit by watching it from a greater distance, providing a chance to take in the full width of the shallow stage, and with this the scale of the situation that faces these acrobats, and more importantly the people on the shores and seas of the Mediterranean, and in the camps and temporary accommodation dotted throughout Europe and the Middle East.