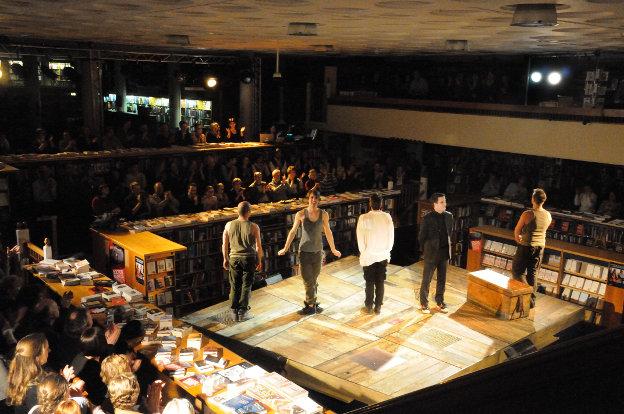 When a performance begins with an actor explaining the concept of the show to the audience you know something different is about to happen. It could go either way…

Surrounded by words and texts in Blackwell’s sprawling bookshop, Creation Theatre present The Factory’s Odyssey. It is a new adventure for The Factory, and their second month with Creation at Blackwell’s, having performed their acclaimed and experimental Hamlet throughout March.

The actors hand a pot to the audience. In it are 24 shards of pottery, one for each of the books of the Odyssey. On each one is written a ‘task’ or an instruction to the actors about how to play that particular scene. At the beginning of each scene, an audience member takes a shard from the pot at random to dictate the way the next scene will be told. It’s informally explained, the lights are up, and everyone’s in jeans and t-shirts, playing with hoops and sticks. It’s a large cast of twelve, which is exactly half the company, with different actors making up the cast each night.

An enormous amount of work, and play, have gone into this project. Every one of the actors knows the 24 short books inside out – and they are all confident storytellers, good ensemble performers and resourceful improvisers. One of the scenes is told entirely in Ancient Greek (I went twice, and no, it wasn’t the same scene each time). One of the scenes calls audience members onto the stage to act as puppeteers for the actors. One is told in the dark (‘radio play’). Another has an audience member interviewing the characters onstage. Some of the tasks were different the second time I saw it – confirming that the performance was being constantly reviewed and refined.

At its heart, this is an exploration of storytelling, using the epic and archetypalOdyssey as a vehicle to facilitate the exploration. Sometimes the plot gets waylaid in favour of a storytelling idea, but conversely there are times when we are suddenly plunged far deeper into an element of the story than could be sustained with 24 switches in two and a half hours. The informal atmosphere onstage and the speedy ‘sketch-show’ skipping from book to book doesn’t often achieve the sense of dramatic gravity that you might hope for in theOdyssey, but it sure does deal with the meandering epicness of a 24 book story successfully.

This is a daring experiment, offering masses of thinking about storytelling through the ages; daring the audience to join in, to follow, but not being afraid to try something and fail. Watching performances fail is not what an audience is used to, and sometimes the audience was unengaged or even confused. A second viewing, recommended by the company to all audiences, found me more invested in the project, more likely to forgive ‘tasks’ that weren’t as successful, and more appreciative of those that really were.