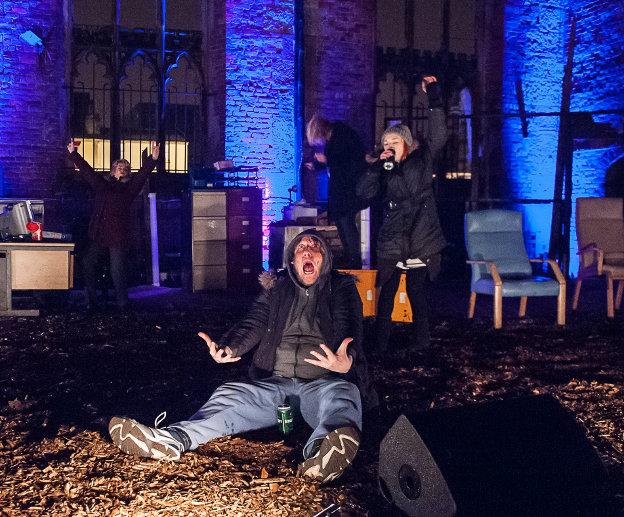 The Bombed-Out Church is a Liverpool icon. Tourists love it as a photogenic ruin. Locals flock to it for cultural events programmed by the redoubtable Urban Strawberry Lunch. Everyone loves a ruin. For Tony Teardrop, Cut to the Chase draws upon the Church’s reputation as a hangout for some of the city’s homeless. It’s a production that tests the company’s site-specific practice to the limit, since its situation in the Church can’t avoid questions of ethics in its embrace of poetic justice. While there has always been psychogeographic poetry in Liverpool’s homeless congregating around the Bombed-Out Church, the enjoyment of irony is a luxury for those who aren’t caught up in it. Tony Teardrop is hugely entertaining, but more importantly still it is an empathic tale about those whose lives are in ruins.

Plonked in an easy chair and sipping from a can, we met Tony in the lounge of a hostel at which he is meant to be a temporary resident, giving orders to the other residents – and also giving it them straight. Although his avuncular manner could turn on a sixpence, Neil Bell’s high-octane performance was subtle enough to prove that Tony was a passionate and determined individual rather than a callous one. He talked rather grandiosely about aesthetics and science, Michelangelo and perspective in art, but Tony was no mere showman: his obsessive discourse eloquently bore the hallmarks of accumulated knowledge and lost potential. His intellectual and creative spark, however, had been short-circuited by schizophrenia.

Aided and abetted by the other residents, the hostel manifested Tony’s determination to make it a home. Mountains of tat were assembled in the yard, and the new manager – ‘Hitler’s Knickers’ in Tony’s moniker – was equally determined to make their home clinically efficient. Defiant to the last, Tony worked throughout on his creative and technological masterpiece, in which the aforementioned tat was fashioned into a ‘tuck-tuck’, a bicycle with bells and whistles of which the boy from E.T. might have been proud.

The core storyline of Tony’s creative process was part of an episodic structure whose momentum depicted the restless reality of the homeless. It would be simplistic to cavil at this form, since the pace and timing of the episode are apt for a world in which things rarely remain in place. Assemblages of furniture and half-finished structures evoked the communal spaces of the hostel in the background, whereas the long and wide stage in the foreground enabled bodies to range freely. The city was depicted through sheer physicality, and the roofless and windowless church in which we sat shivering opened our ears to the city’s throb and hum. While off-script the actors observed the action as if to evoke the paranoid surveillance under which vulnerable people feel throughout the wakeful hours. The Brechtian note of this direction addressed itself to the audience through meta-theatrical moments in which the Bombed-Out Church doubled-up as the locale of action and the space of performance. A contemplative moment had Tony instruct new hostel resident Billy, a wise young man played with assurance and maturity by Robert Schofield, on seeing the world anew merely by looking at the sky from the other end of the Church. ‘It’s only the Bombed-Out Church,’ Billy retorts, in an attempt to shake Tony out of reverie. The intended effect of this ironic play-off was to unseat the spectator by means of an imagined reality. Empathy is not a given, in other words, but it can win over if only we shift position.

One of the play’s discrete messages, particularly during a crisis for which there seems to be no plan B, is that more than ever we need to think of the victims of violent capitalism. But we can also be victims of circumstance. Homelessness is represented in the play neither one-sidedly nor in celebratory mode. It is a life few would choose to live if possessed of adequate agency. Esther Wilson’s granitic script avoided sentimentality through caustic repartee, as if affection was something the characters could ill-afford. Wilson’s ear for the brutal sarcasm and unforgiving wit of real people revealed a writer who has engaged in actually listening to them.

Homeless people’s lives reset the meaning of the comfort zone. Boundaries are constantly tested and can dangerously overflow. The play’s climax demonstrated this to exhilarating effect, but its fuse was burst in a comic ending which had Tony riding off on his homemade tuck-tuck. Before this he confronted Hitler’s Knickers as if his life depended on it with a moving speech on what it meant to make and have a home. ‘You’re too far west and I’m too far east,’ Tony angrily informs her, in an image that has both of them waving hopelessly at each other from opposite ends of the human spectrum. Off he went, as the audience was told throughout the play, to a reunion with his estranged children, for whom the bike was made. Resisting facile resolutions of both dramatic and moral kinds, in the end the play encouraged us to think that Tony just rode on and on, regardless of whether he reached his destination or whether it was possible to have one at all.