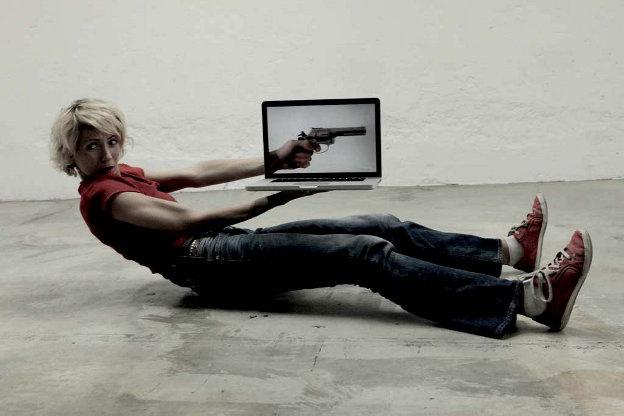 Stage presence is an ineffable quality. As soon as Barbara Matijevic enters the space you know she has it and that you are going to be in safe hands. The Basement is bright but warmly lit, with a white background wall.

The piece has started before this defining moment, with a MacBook on a stand first swirling with corporate logos, then a male voiceover describing how he has had to buy a new hard-drive to upgrade his capacity and that he going to show us how to install it, if he can find the right size screws.

Barbara appears and begins to interact with the on-screen demo, and then things start to change. Her hands become those on screen and in quick succession the screen image becomes a gun, a carrot, a car battery, shoelaces. Her body language perfectly mirrors the on-screen action. Sometimes the voice is from the film footage, sometimes it’s Barbara’s commentary. She has a cool, sassy presence, beautifully underplayed but full of subtle emotion and expression. The quality and precision of movement is evidence of her dance training (she teaches dance in her home city of Zagreb).

Gradually sequences on screen build and become longer, or more thematic. They veer from comical to gruesome. The Mac is moved around the room and is used dramatically, for example at floor level for shooting practice, as a stomach, and on the head (with a monkey sitting atop picking at Barbara’s scalp – ‘it’s like a head massage,’ she says, smiling).

The film clips, sourced from YouTube, are very cleverly linked and keep the attention throughout – you cannot second guess them. At one point the screen goes blank and just has colours, which Barbara attempts but fails to control. There is off-screen music and sound-effects at points, used effectively to underline some sequences but never distracting from the performer and her communicative tool.

To break from the format, Barbara describes how the concept of ‘visualization’ can help people with panic attacks. You imagine calming things like a fire in a grate, or clear blue sky. ‘This doesn’t work for me,’ says Barbara – the fire always burns the house down. Cue on-screen hands moving over moss then picking an apple. ‘I’ve never grown an apple before,’ says Barbara, the apple in her on-screen hands, then adding perkily, as if we had never seen one before, ‘Isn’t it pretty!’

Towards the end she narrates the making of a Damien Hirst style jewelled skull, using really shoddy materials and marvelling at the craft of it, the hours it took, and declaring that it is best thing we will ever see.

So a final punch at the value of art, whilst bringing home the way in which we communicate now, filming everything (from S&M to childbirth, cookery to pointing one’s toes correctly) and putting it all in the public domain.

Forecasting is an excellent example of idea married to imaginative form. Neat in structure, crisp in presentation, thought-provoking, funny, tough and expertly done. It is the third part of a trilogy from this ingenious company; I look forward to seeing more from them.