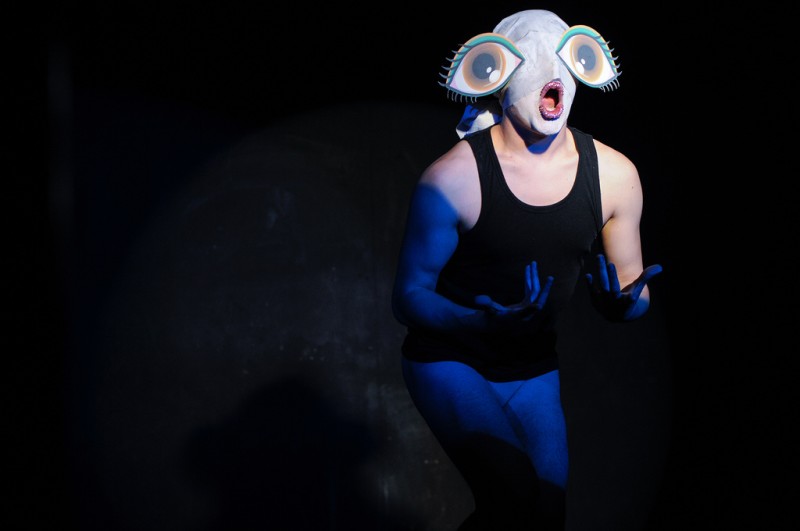 Entering the small black box stage of the Marlborough Theatre the audience encounters a drag artist, standing on a plinth, singing Gloria Gaynor’s I will Survive with his back turned to the audience. Then, as he undresses, we see a man wearing a black vest and underpants. His face is covered with white cloth that exposes his lips, beautifully decorated with glittery beads and red lipstick. A pair of magnified cardboard eyes accompanies this exaggeration of the lips. When the audience shifts its attention from his face to his body, it becomes clear that the drag artist has divided his presence into two gender positions, wearing a high-heel shoe on one foot whilst leaving the other one bare. This reference to gender and sexual identity, and the performativity of gender become clear as the central concerns of the piece.

This statue-like figure – an epitome of gender identities gathered in a single body – presents the audience with a story of transformation. As the performance moves forward, mostly through lip-synced songs, he tears off the big paper-eyes and the cloth over his face, whilst everybody is watching him repeatedly saying ‘la bouche’ (mouth). This not only reveals his quite masculine facial features, but also emphasises the sparkly feminine mouth. The repetition of ‘la bouche’ gives the impression that it is his name and this is an introduction scene: an introduction to the process of La Bouche’s identity formation embodying the two gender positions, as well as an introduction of the stage persona to the audience. La Bouche in Watch My Lips then further explores sexuality and gender through songs and dance. The resistance to and questioning of heteronormative sexual identity and the socially defined boundaries of gender are taken further when he, naked and facing back on the pedestal, pulls his genitals between his legs and transforms his male organ into something that looks more female. The blurring of boundaries between genders through a single body is very interesting: it not only foregrounds the interrelatedness of both sexes, but also evokes the performativity of gender, its constructed nature. The lip-synched pop songs through a deep male voice enhance the fluidity of identities by overlaying the here-and-now presence of the performer with the physically absent owner of the voice. This liminal state that La Bouche occupies suggests that the transformation creates the possibility for multiple of identities, not a single fixed one. La Bouche in Watch My Lips balances humour, seriousness, suffering and sensitivity, and offers a stimulating performance that foregrounds issues around sexuality, gender identity and otherness.

After a ten-minute break, Baby Lame takes the stage.  He is a cabaret drag queen with a garish look in a synthetic blonde wig, excessive make-up over a butch, bearded face and ill-fitting dress, accompanied by another performer, Moan Crawful as her mother (who in her inflated make-up and dress stands mostly in the wings). Baby Lame’s show involves songs, made-up videos of Baby Lame and Oprah Winfrey, dance, singing, quite a lot of screaming and swearing, and props such as a blow-up doll (note: he throws this forcefully to the audience which at the show painfully ended up on my face!). Most of the time Baby Lame grotesquely dances and jarringly sings, and speaks to the audience through various tones and roles: she is Baby Lame when she has a sweet voice of a girl, and suddenly shifts into a rather monstrous persona angrily yelling at the audience. Throughout the night the audience is often asked to participate in the show as Baby Lame walks around the audience talking to them individually or inviting an audience member onto the stage, and sometimes picking on an audience whilst playing ‘pass the parcel’. The willingness of the audience leads to some naturally developed funny sequences. However, overall, the show has some rather tasteless jokes that often lead to uncomfortable and even dull moments.

Baby Lame’s show description refers to My Super Sweet 16 and Honey Boo Boo, seeming to offer a drag-cabaret performance with a sarcastic view on the culture of commercialisation and commodification. Throughout the show Baby Lame rags about fallen celebrities such as Britney Spears, cynically impersonates Rhianna or ridicules Oprah Winfrey through the made-up video recordings of conversations between Winfrey and Baby Lame. However, these instances of social criticism are fundamentally tenuous; they are not developed or delivered strongly enough to create laughter or provoke thoughts in the audience. The show therefore fails to meet its own aims or its offer for a fun night with a critical edge. This offhand banality of the show might be purposeful, yet such a link between the mode of the performance and its underlying themes is not given solidly enough for the audience to recognise it.

These end-of-festival shows at the Marlborough Theatre, which has been developing its identity as a programmer for Queer Arts particularly since the inception of Pink Fringe in 2011, despite certain weaknesses offered some insightful perspectives on the questions of gender identity, otherness and popular culture.