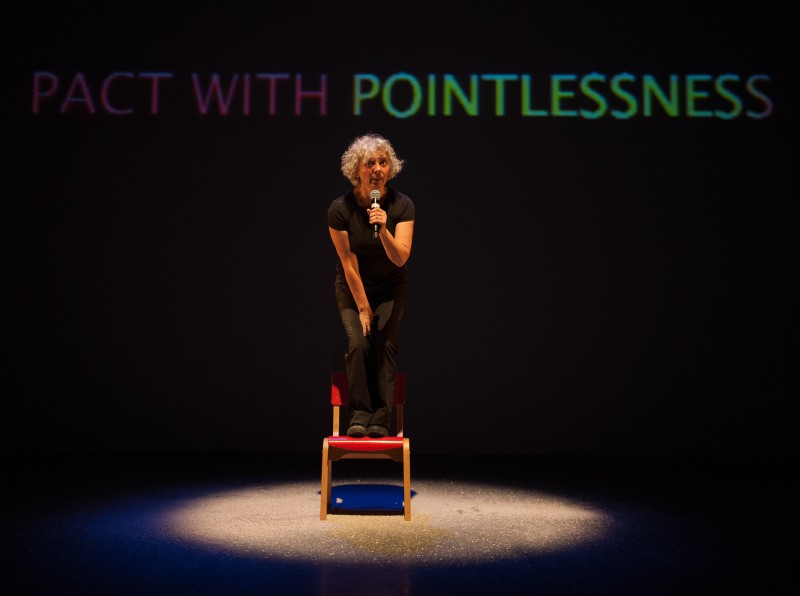 A thrashing punk riff heralds the start of Wendy Houston’s latest work, a tribute to former collaborator and friend Nigel Charnock who died last year. As the music thrums she bolts onto the stage, running in circles before disappearing again. And so begins a show that, although constructed from futile acts and asinine platitudes, resonates with a sharply felt sense of the attempt to ‘make sense of it all.’

It is fascinating to watch as each section of the work uncovers the range and depth of pointlessness, with Houston espousing empty metaphors and dancing throw-away actions, all set against a back-drop of clumsy computer projections. In doing so, Houston draws on some of Charnock’s work’s notable features – his break-neck, looping, lilting stream-of-consciousness monologues and his arrested explosive actions – as if she is trying to recall his presence and channel his verve on to the stage. Though Houston is also firmly present, a defiant if meandering figure. There’s a halting reticence in her voice as she leaps from idea to idea, from statement to statement searching for a way to pin down any sort of meaning. The effect is kind of punk-Beckett, and the world on stage begins to dislocate, casting us adrift into no-time and no-place.

Amongst this estrangement though there is also a fierce humour, seen in simple and playful actions. Straight-jacketed and masked in a cardboard box Houston tries to dance a routine that she seems to barely remember, leading to the sense that she is out of her depth, that it is all too much.

The crescendo is a lonely and desperate duet with a plastic fire bucket, its bright red inanimate form swung from the crook of Houston’s elbow. At the peak of this duet Houston flings handfuls of the contents into the space, for all intents and purposes the contents look like cremation ash. These moments, because of the painful ludicrousness of them, become deeply moving, a kind of frustrated DIY visual poetry. A desperate fuck-you to the world. But it might all be for nothing, for Houston slips back into the same old routine, the same old repetitive metaphors, lost and alone on stage. And so, Pact With Pointlessness reaches a kind of apotheosis, conveying a visceral sensation of that strange state in the face of grief: the cloying numbness that masks a kernel of barely noticeable rage.