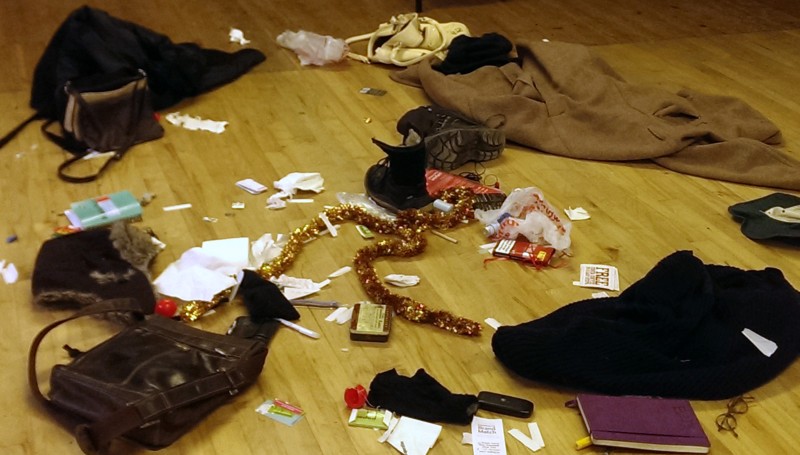 The publicity says ‘Everyone experiences loss every day from the small things to the deeper losses, whether it’s losing your keys or forgetting something…’ Up on the stage, a big jumble sale like heap of clothes lies on a table. A couple of dour looking clowns attire themselves from the mismatched forsaken garments. A red bereted figure pops up from underneath the pile and surprises us. The blond haired clown does her hair into scruffy bunches. In an ordered row are a nice collection of characterful chairs, all shapes and sizes just like our four clowns.

There are lots of positives about Losing It. It’s an unusual, visually arresting contemporary clown show, entertaining & thought provoking for adults and young alike with a dynamic soundtrack of pacy, catchy tunes composed by Jake Rousham. Rhythmically the company are very strong: bound by a good combination of shapes, sizes and visual characterisations they work well together. Ben Edmonds is a bold, self assured clown. Ezra Lynch and Elena Saorin provide contrast and foils. Michelle Lediert stands out – so very within what she was doing from the very beginning. I could have simply watched the animation of her eyebrows all evening!

I particularly enjoyed all four clowns sitting in a row, hand slapping onto their bodies. Lediert’s response to her jacket cuffs going into her face, hiking her jacket back into place at the end, stole the show. It’s these spontaneous-feeling moments that work. Other sections, and there are many, feel a little too tried and tested, as if to a formula of some sort, missing some of the freedom of clown.

I felt Losing It needed more rough edges. I didn’t lose it, despite so wanting to. Much of the performance felt tame, too controlled and sweet, a conveyor belt of sketches and routines. A greater range in its characters and their interactions would have offered some much needed shade to the lightness. For example, a bubble sequence was eye-catching, quite prophetic and symbolic. Its large bubbles were wafted up with a hand held electronic fan, offering a great opportunity for the clowns to have been more naive, intrigued by this piece of electrical equipment that going on and off. This scene was a clear example of an underdeveloped sense of play in the show, perhaps a lack of confidence that play can be enough.

Overall this enjoyable show wants some editing, using fewer sections, with more development in the extremes of each scenario. Yet it’s still early days for the production… this is only the second time the cast of clowns have done this show. I’m looking forward to seeing it ripped up a bit and run in.