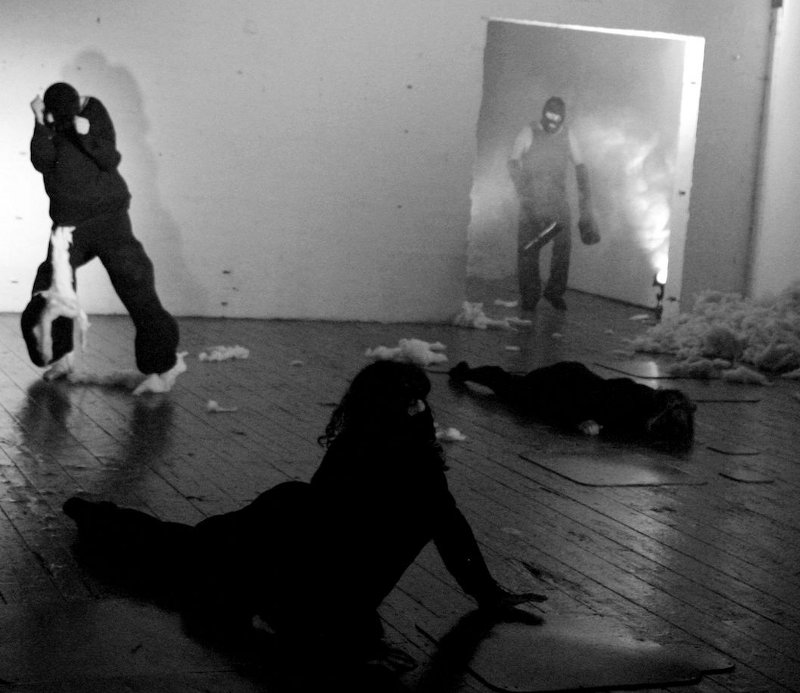 Apocalypso! Our culture is awash with images of violence, destruction, despair and degradation. 24-hour news coverage beamed from war-torn countries, TV documentaries exposing the use of torture, gory and sadistic films, shoot-em-up video games. Almost daily we encounter yet another dystopia, another vision of apocalypse – the end is nigh, it seems. The end is never-ending.

How do we process these images? How do we assimilate and evaluate them? Dudendance’s This Side of Paradise grasps the conundrum by the short and curlies and beats out an answer with a cleverly manipulated use of site, intriguing imagery, and engaging physical performance.

We are first invited into a chamber of horrors that is all the more desolate for the fact that it is daylight lit – the Autopsy Room, a high-ceilinged space with a dust-smeared glass roof, cracked tiles, deep sinks, a cupboard full of ominous looking tools and medicinal bottles, and a big pulley hanging above. (‘Maximum load one tonne.’) As is often the way with truly site-specific theatre, it is hard to tell what is found object and what has been placed as ‘set’ or ‘prop’. There’s a pile of mattress stuffing and rags on the floor that seems to be moving, a hospital gurney that has what might be a human figure on it, and an ape-like man with clenched knuckles chained to the wall, dragging himself to and fro. He wears ripped and torn joggers, patched together with gaffer tape, and a skewed balaclava that reveals just one eye.

A melancholy usher, also wearing a balaclava, escorts us into the neighbouring Demonstration Room, which by contrast is in almost- darkness. This room is occupied by a number of writhing figures, stuffed in strange ways so that they seem more puppet than human figure – horrible deformations of the human form that are headless or spineless or abnormally long-bodied. Mutants! The ape-man and another one-eyed figure seem to be the ‘guards’, manipulating and tormenting the other figures. Just when it reaches a point in the show where the point seems to have been made, enough already, a shift occurs. With the introduction of kitsch lounge music and vocalised ‘pows’ and ‘kerrangs’, the world witnessed slips into cartoon violence, humour releasing the tension that has been held taut. Ape-man morphs into a ludicrous club-armed creature rampaging round the space, others wield tacky cardboard weapons and toy guns. We’ve moved from nightmare terror to Hallowe’en party horror.

This Side of Paradise uses its chosen site very carefully and beautifully (if I can use that word of something exploring the opposite of beauty). The opening and shutting of doors that allow in a limited ration of light in the main (second) space; the movement of the performers through the spaces; the careful integration of the found objects/physical aspects of the site into the dramaturgy of the piece. The choreography is fluid, precise, meaningful – I particularly like the puppeteer-puppet dynamic explored between the various pairings of performers.

It’s a dark subject, but there is humour for those happy to find the dark side of life amusing – and those who are this way inclined might spot some of the many passing references to video gaming, comic book and film characters – from the shadowy Nosferatu to the lurching zombies of Resident Evil, via Batman and The Hulk.