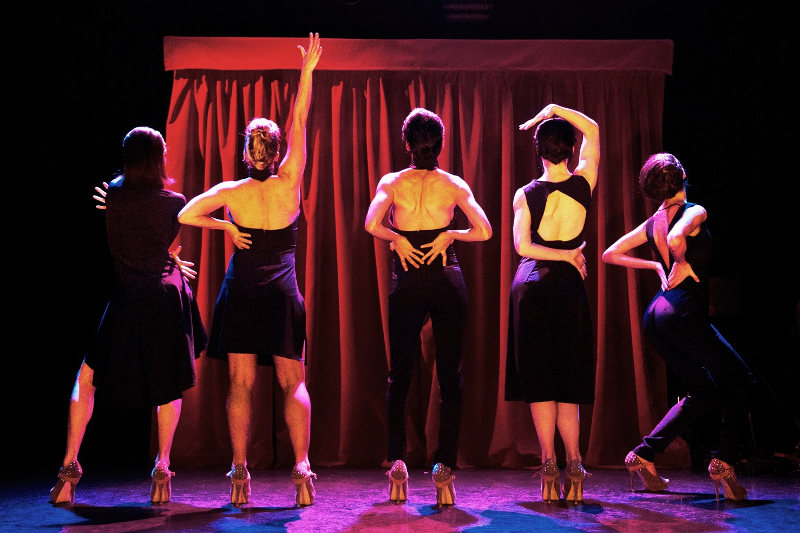 Shalom! Peace be with you, prosperity, welfare –hello there! Oh, and while I have your attention, can I look in your handbag to see if you are hiding any bombs? And – well now, how interesting – don’t worry honey, I won’t tell a soul…

Meet Star, an Israeli diva who has a wicked way with words. She knows that they often say one thing but can be twisted or used ironically to mean quite the opposite, that they can beguile and seduce and entrance and ensnare. Star sings and dances and tells stories, aided and abetted by a boy musician called Camp David, and a pentangle of cute cart-wheeling girl foot-soldiers, the Starlets, who strive to obey her every command – ‘Yes, Star, yes!’

The troupe tell us two parallel stories – the story of an Israeli family living in a settlement in the ‘occupied territories’, and the story of the Jewish people and their quest for a land of their own, and how things have been since finding that land. Meet Israel, the country – and Israel, the little boy who shares his name with his homeland.

The creation of Star as storyteller (Theatre Ad Infinitum’s co-director Nir Paldi, the writer of the piece, plays her in glorious drag – all shimmering gold lame and skin-tight Lycra leggings, topped off with a sleek black Cleopatra wig) is a stroke of genius. With more than a hint of pantomime she steps in and out of the stories, commentating on the action, and teasing the Starlets in a way that only shiny and powerful people (entities, nations) can get away with. She’s a bully, but a loveable one. That ‘she’ is a man in drag humiliating women adds another level, a commentary on gender politics, into the mix.

No stone is left unturned, no closet left unopened. There are stories within stories, the layers building and unpeeling beautifully throughout a fast-paced and (yes!) fun-packed hour that proves that political theatre doesn’t have to be polemical, it can be as entertaining as it is thought-provoking. (Bertolt Brecht and Kurt Weill taught us this many years ago, and Joan Littlewood took up the baton with Oh What a Lovely War, but in recent years we seem to have lost the way when it comes to combining politics with theatrical entertainment.)

Real air attacks and schoolyard war games – the War of Independence, the Six Day War, the Yom Kippur War and the first Gulf War. Gas attacks and big bad bogey man Saddam Hussein. Innocent Jewish teenagers killed in bomb blasts on Jerusalem’s big yellow school buses, and innocent Arab teenagers killed by soldiers entering sewage-filled villages. Tiny children killed whilst trying to flee from the Nazis, and Holocaust memorial school trips to visit Auschwitz. Is this appropriate subject matter for a cabaret song-and–dance? Yes indeed. In one hour we learn more about the history and complexities of the modern nation of Israel than any history course could teach us in a year.

And it is the attention to detail that makes the show – detail that comes from Nir Paldi’s personal knowledge and experience (we learn, for example that the reason the Arab settlements are filled with the smell of burning rubbish is because the bin men don’t visit what is seen to be no-man’s-land; and that the Jewish settlements are at the top of the hill, and the Arab settlements at the bottom, so the sewage flows downhill). Living detail and the awareness and expression of the complexities of the history and politics of Israel. Nir’s story is one of someone who loves and cares about his homeland, but who has never felt comfortable with a one-dimensional viewpoint. He sees two, three, four, more sides to every story – and we learn that there can be many ‘truths’ that co-exist simultaneously. He takes elements of his own autobiography – growing up in the settlements, doing military service, being educated in the three forms of anti-Semitism, being surrounded constantly with stories of war and the threat of war – and with the support of the company’s co-director George Mann and the input of the five-woman supporting cast, builds on this material to take it beyond one person’s story; to make it the story of a nation.

And what an inventive way to tell this difficult story! In a lovely modern example of the Brechtian verfremdungseffekt (or, if you prefer, with a nod towards Mel Brooks’ The Producers) Nir’s creation Star brings on each terrible chapter in the story of ‘classical anti-Semitism’ – the Roman massacre of the people of Judea two thousand years ago, the Crusades, the Inquisition – with a wave and a smile: ‘Camp David, play the Persecution music…’

And of course the outrageous Star can say all the things that most wouldn’t dare to say. Holocaust stories are told, and Star cuts in to complain that every family festival is blighted with these stories. ‘We know, we know…’ she cries, bored to death with dull-as-dishwater death and destruction. Meanwhile, the Starlets high-kick and circle-dance merrily to Hava Nagila.

Ballad of the Burning Star merges its component elements with exquisite skill, and everything is delivered by our onstage cast of six with the level of technical expertise and artistic sparkle that we’ve come to expect of Theatre ad Infinitum. Some audience members might be surprised by the differences between this new show and the previous worldwide success, the word-free Translunar Paradise, but those familiar with the company’s other works, and with their working methods, will know that every show they make uses whatever tools from the theatre-makers’ box that they feel fits the job in hand. The Lecoq training is still highly evident in the precision of the physical acting and choreography. The longstanding interest in the integration of live music into a theatrical setting is there to see. Most importantly, the desire to use theatre to tell stories that really, really matter is paramount. A wonderful piece of theatre, the latest brightly glowing star in Theatre Ad Infinitum’s firmament.