You shall go to the ball, Cinders!

Yes, I’m off to the Edinburgh Fringe: a little late to the party, the first time in years that I haven’t been there for the opening week, but it’s all fine as there’s more than two weeks to go, and the last week includes the British Council Showcase, which offers some of the best of UK work to an international gathering of producers and promoters.

So, what am I going to see? How to choose. Play it safe or wander off on wild adventures? 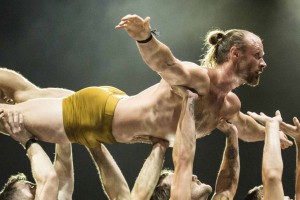 Circa: Humans at Underbelly Circus Hub

The Dance, Physical Theatre and Circus section is always my first port of call. There are plenty of circus delights at the Circus Hub, Underbelly’s two-tent venue on the Meadows. These include Acelere by Circolombia. I’ve not seen this show, but I know the company and have high hopes. Other familiar circus companies at the Hub include Australia’s finest, Circa, here with Humans; and the Total Theatre / Jacksons Lane Circus Award winning Barely Methodical, creators of Bromance, who are back in the Burgh with new show Kin.

I’m sad to note that Cirk La Putyka’s Batacchio (Zoo Southside) finishes on 12 August, so I’ve missed that one. Never mind! Other Czech goodies at Zoo include the return of Spitfire with two shows: first there’s TT Award winning One Step Before the Fall, in which two women – one performer/dancer with fabulous presence and boundless energy, and one musician/singer with stunning sound-bending skills – enter a boxing ring to deconstruct and replay a few minutes of Muhammed Ali’s boxing career; and not only that gem but also The Narrator, a one-woman ‘story about secrets’ that I’m very much looking forward to experiencing. 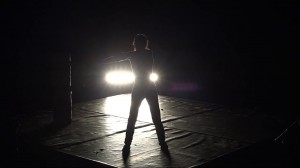 Back to the circus: more goodies can be found at Assembly Roxy, who have the London International Mime Festival hit All Genius All Idiot (Svalbard Company with Aurora Nova), and another Aurora Nova supported show called Fauna which I know nothing about other than the brochure blurb, which promises ‘a captivating exploration of primal behaviour’ – but I’ve heard good reports, so will be booking myself in. Other Assembly Festival circus treats include Casus who since their Fringe success with Driftwood last year have whizzed around the world and wowed audiences here there and everywhere, and now bringing the show back to the Burgh; the return of the magnificent Gandinis, who this year manifest as a three-woman exploration of the juggling and dance dynamic with a piece called Sigma; and Quebec circus stars Flip Fabrique with new show Transit, following on from last year’s success with Attrape-Moi! (Catch Me!). More from Montreal at Pleasance ECC who are hosting Cirkopolis by the fantastic Cirque Eloize – a Fritz Lang-inspired show I saw a couple years back at Brighton Festival and enjoyed greatly / reviewed favourably. Check the reviews section of this site to read all about it.

The more usual Pleasance Venues (Dome and Courtyard) have a number of great physical theatre shows, including not one but two by Theatre Ad Infinitum, the one-man tour de force The Odyssey, and the word-free and stunningly beautiful mask-theatre piece about bereavement, Translunar Paradise. Two other great ensemble British companies with an Internationalist approach at Pleasance: Gecko team up with Shanghai Dramatic Arts Centre for The Dreamer, and Mime Festival supported Theatre Re present The Nature of Forgetting. And also at Pleasance, one I won’t be missing is the irrepressible Anton Adasinsky of Derevo with his solo show Last Clown on Earth.

Listed under dance is a little gem at Greyfriars, a Rosemary Lee video installation called Liquid Gold Is the Air, which has a soundtrack by Graeme Miller. It is a 15-minute loop repeated throughout the day – so could be a lovely pause in a busy day of shows. This is presented in collaboration with The Place. If you want actual, physical dancers rather than dance-to-camera, then head down to Dance Base, who have (as always) an eclectic and interesting programme. I’m hoping to get there for Argentinian two-man dance / physical comedy show Un Poyo Rojo. A flag-up also for Finnish physical theatre company Kallo Collective, who last year collaborated with Thomas Monkton on Only Bones, and this year present Helga – Life of Diva Extraordinaire at Summerhall. 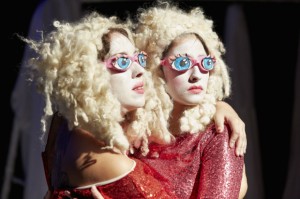 Ah yes, Summerhall… Richard Demarco’s year-round Edinburgh venue with a strong penchant for European visual theatre and experimental performance. Far too many interesting looking shows to namecheck them all, but some I have my eye on include Mouthpiece (featuring the fantastic Amy Nostbakken, music-making star of Theatre Ad Infinitum shows The Big Smoke and Bucket List) which is part of the CanadaHub programme at Summerhall. I’ve also got a yen to see Old Stock: A Refugee Love Story by Zb Theatre Company, also part of the CanadaHub programme, also looking to be an interesting take on the music-theatre crossover possibilities, and featuring Klezmer folk sensation Ben Caplan.  The curated programme within the prgramme thing has really taken hold in Edinburgh. In a Fringe of many many thousands of shows it is inevitable that people will be relieved to find something familiar to latch on to, The Big in Belgium programme, also at Summerhall, is a guaranteed-to-please theatre brand for those of us who love European experimentation in general and the Flemish front guard in particular, and the 2017 line-up includes old favourites Ontroerend Goed with Lies alongside a number of interesting shows by Edinburgh newbies (new to me anyway) such as On Ice (yes, it is on ice) and Arm – Mireille & Mathieu, an absurdist object theatre piece that seems right up my street. 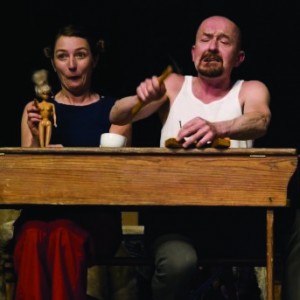 Arm – Mireille and Mathieu. Big in Belgium at Summerhall

I’ll also be going along to Summerhall to see perennial TT favourites Ridiculusmus (Give Me Your Love), the circus-shape-shifting Ellie Dubois (No Show), and the always-funny and thought-provoking Rachel Mars (Our Carnal Hearts). Shunt’s David Rosenberg is also there with Seance, another collaboration with soundscape artist Glen Neath (working together under the name Darkfield) an ‘intense sonic performance in a shipping container. Fun, fun, fun! Talking of which – Sh!t Theatre are back! This time it’s not politics or unemployment or the housing crisis, it’s Dolly Parton. The show’s called DollyWould. Of course it is. Another clever-funny artist is Jamie Wood, creator of Edinburgh Fringe hit O No! (a quirky homage to Yoko Ono) whose new show I Am a Tree is at Assembly George Square.

Over at the Traverse, Kneehigh give us The Flying Loves of Vitebsk, written by Daniel Jamieson, directed by Emma Rice, and inspired by the life and work of Marc and Bella Chagall (opening 15 August); Zoe Coombs-Marr, Ursula Martinez and Adrienne Truscott prove they too are not afraid to talk out of their arses in Wild Bore; and the fabulous poet and storyteller Inua Ellams is at the Trav in the final week for A Evening with an Immigrant.

It’s worth noting that many good shows are late openers, often only on for a few dates during the British Council Showcase (which takes place during the final week of the Fringe). These short-runs include Paper Cinema, who are presenting their instant live animation take on Macbeth at Pleasance Dome from 21st August; RashDash, who bring back the exhilarating Northern Stage hit Two Man Show (in which two women play two women playing two men) to Summerhall for a few days that week; and the magnificent diva of experimental expressionist dance, Liz Aggiss, whose saucy feminist frolic Slap & Tickle comes to Zoo from the 21st (seen and reviewed most favourably in the Brighton Festival). 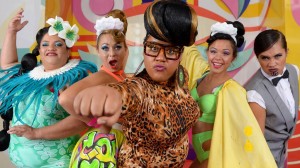 A couple of other shows previously seen and highly recommended are Dr Carnesky’s Incredible Bleeding Woman (Pleasance Courtyard), which grabs menstruation by the pussy and waves a red rag at detractors; and one of last year’s Total Theatre Award winners, Hot Brown Honey, which is another ensemble of feisty female performers taking taboos about race and gender by the short and curlies and giving us a new song to sing. Let’s here it for singing – singing is so much what we need. Another returning winner is FK Alexander. I’ve seen / experienced / taken part in (I Could Go on Singing) Somewhere Over the Rainbow twice already – and may well go back for a third time. I mean, who wouldn’t want to be sung to by a brilliant performance artist channelling the spirit of Judy Garland whilst accompanied by one of Britain’s best noise bands, Okishima Island Tourist. Toto, I’ve a feeling we’re not in Kansas anymore, Toto.

No, of course we’re not. We’re in Edinburgh, remember. The Fringe. Ah yes…

That lot, I can see, will be far two much for one person to see in two weeks – but I am going to give it my best shot. I will report back. Watch this space. 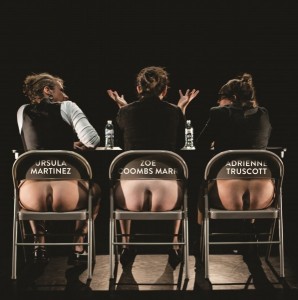 Wild Bore at the Traverse