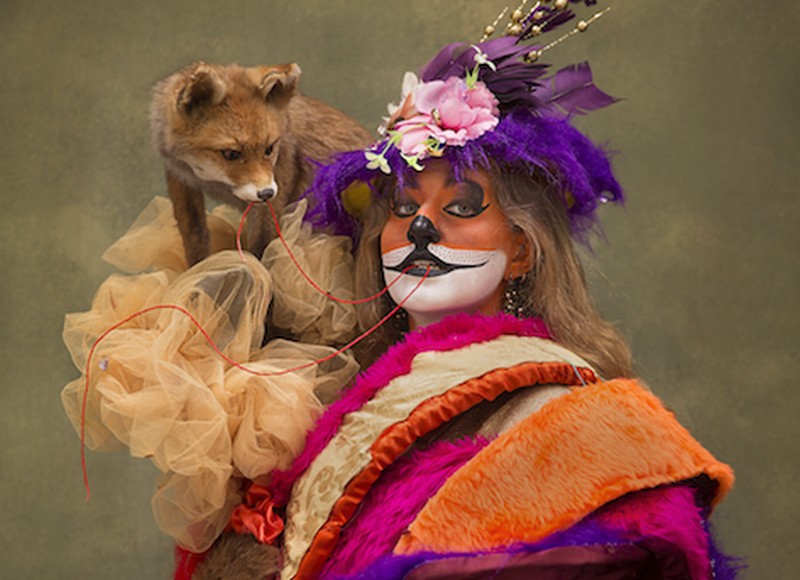 Fox Symphony is the second full-length show from performance maker Foxy and Husk, whose human identity remains a well-kept secret.

Sumptuously dressed in rich brocades, fun-fur and sparkles, with an exquisitely painted foxy face, Foxy and Husk is a performer like no other. Her stage impact is immediate and her skill in the chosen theatrical form, lip-synching to verbatim recordings, faultless. It is at once bizarre, batty and intriguing and it is strange how quickly you become accustomed to it. A lip-synching woman-fox, dressed like a pantomime character, talking about society and identity? Of course. Bring it on.

Fox Symphony presents a range of opinions about experiences of community and nationhood, edited from a series of interviews. On stage and in film we hear the voices of these people channelled through Foxy, occasionally costumed to suit. We can only gauge their gender and ethnography through the voice and Foxy’s performance. Inevitably some characters have more impact than others; the Scottish couple are delightful, and brilliantly put together on film (film makers Alice Russell and Clair Nolan.) The Jewish man with his eels and bagels was hugely popular and memorable. There are interesting insights about class – ‘I like the Bombay Mix with raisins in best – that sounds so middle class!’ – and a moving piece from the daughter of a displaced family who long for different ways of life.

It’s a linear narrative that sometimes felt a bit flat. I wanted a bit more challenge: to hear tougher stuff mediated through Foxy. Some bits of business seem like padding. It makes sense within the dramaturgy (by Mary Osborn) for Foxy to eat a plate of eels and mash, but it wasn’t interesting to watch.

Having a largely filmed backdrop allows little opportunity for lighting designer Joshua Pharo to really play, and the stage picture switches between film on and film off. This limits movement too, with Foxy only coming centre stage at intervals, working within the restraints of the format. The audience is welcomed, served tea and whilst there is no concept of a fourth wall I struggled to place the ‘live’ Foxy in the world of these filmed ‘others’, let alone understand where we fitted in. But I rather enjoyed that struggle. Known theatrical conventions are disregarded. It may alienate some, and confuse even more, but as a performance conceit it’s refreshing.

With lip-synching having its moment right now – Dickie Beau making headlines and the LipSinkers constantly touring – Foxy and Husk proves she is an expert in this form. If Fox Symphony lacks the emotional impact of Fox Solo, and feels a bit stretched, it is an adventurous and enjoyable hour, produced with care and presented with charm.