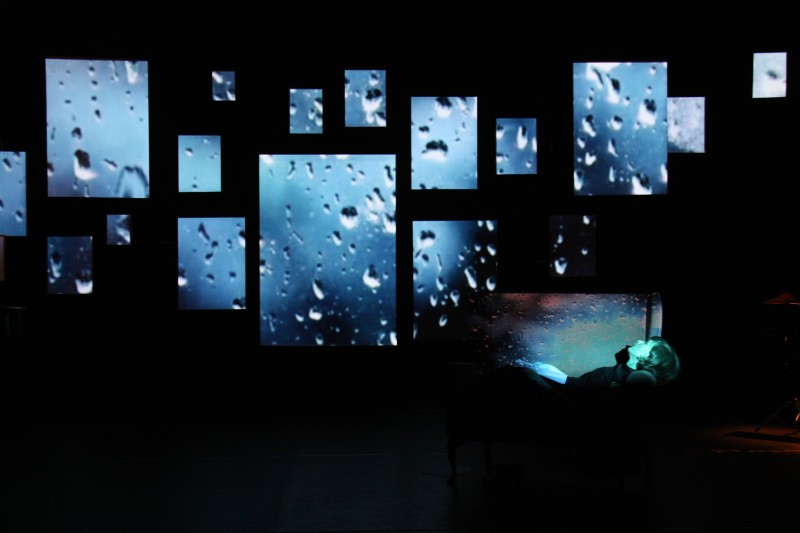 The story starts off with a casually-delivered bombshell. A simply-dressed young woman takes centre stage, reading from a sheaf of papers on a downstage table. ‘That’s final – it is inoperable,’ she reads. Cancer then, and terminal, in the opening lines, or rather bars, for this story is to be sung, supported by a chamber string orchestra (the Ligeti Quartet, with piano) to a score written by the Divine Comedy’s Neil Hannon. As an audience member it’s a daunting opener, but the company, led by Nuffield Theatre Lancaster’s director Matt Fenton have worked to extract every drop of beauty from the premise in their staging.

Beucheler’s script provides the underpinning to this moving and humane approach. It progresses through a series of letters covering the span between this terrible diagnosis and the protagonist’s inexorable decline as the year turns from winter towards early summer. The letters are written from dying son to distant father, whose arrival is held at bay by his son’s wishes that he not visit. The writer places moments of transcendence amongst the identifiable realities of paving stones, answer phones and familial tensions. The son is a musician and the relationship to music, to his piano, sets up a relationship with the transcendent as well as fully embedding the musical form within the narrative. Further, the sung form (I’m reticent to use the word opera because of its associations with a certain quality of voice not in evidence here) creates an aesthetic distance to the material and this is amplified by the decision to cast the central role who signs off each letter sung as ‘Your Son’. These distancing effects make it easier to more readily accept the beauty on offer on stage without worrying about in any sense ‘enjoying’ such a painful story.

Hannon’s rich song cycle, including some stunning instrumental interludes, provides a ravishing current for us to ride. The unusual cadences he often works with, immediately identifiable to fans of his work, develop a lush strangeness diverting the classical forms and instrumentation used. The staging, by Imitating the Dog, is a fragmented mosaic of screens across which dates and images – sometimes highly specific, often metaphorical and abstract – play with a dream-like language of metaphor and movement. Birds scatter, raindrops fall; french windows appear and disappear. Always there are blank spaces and darkness amongst the light and the threat of complete disintegration: it’s a terrific visual metaphor. The visual and literary presence of the changing seasons provides a suitably epic backdrop to the tale.

There were lapses in this wash of style and emotion: I occasionally felt frustrated by the solo actor’s inability to reach all the notes required of her by the score and the video software seemed to be straining at times to deliver the design. But it’s early days in the production’s life and this is a powerful, meaningful performance which succeeds in its moving exploration of the most difficult of subjects, realising the vitality of immediate human experience through its heavily aesthetic lens.