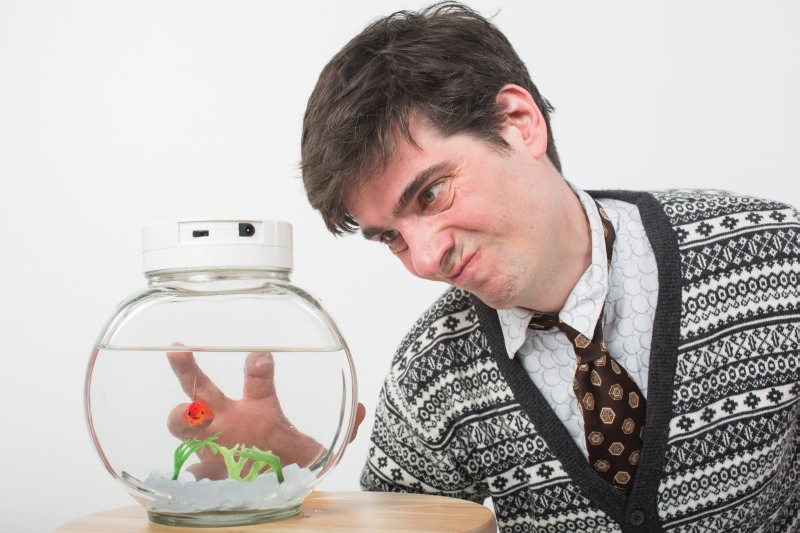 This piece from Frank Wurzinger, directed by the deft hand of stalwart John Wright, is as much a joy as it is a jesting tragedy. Being drawn into the world of Frank Wurzinger’s passionate and foolhardy attempt to perform his play for us warts and all is a delightful journey into collapse – the collapse of the failing clown and the collapse of the failing body and mind of his fictitious character.

Günther Obermeier is an endearing office worker from Bavaria suffering from a serious illness that General P (Günther’s useless GP) can’t even tell him about properly. Both Frank and Günther love life but this life is slowly petering away – for Günther has only ten days before his brain collapses and he will be dead. So he changes his telephone answer machine message to a garbled collection of euphemisms, including that he has gone away to a better place.

Absolutely not morbid at all, the piece plays within the playing, brimming with trips, turns, and slips-ups in language both physical and verbal. The intelligence of his performance draws the audience into the palm of Wurzinger’s hand. Even though often spoken in gibberish, you know exactly what Günther means. It’s a language in which you can fill in the blanks because of the huge goodwill you have toward the character. At the same time its ambiguity allows Günther to draw us into intimate reflections on bowel movements or to lean inwards to listen to his tiny musical box playing a version of Yesterday.

Günther is a fan of Cliff Richard. It doesn’t make him gay, he roars: ‘Some people happen to like Cliff Richard, in fact you people who use your thingies’ – he gestures a mobile device, something which has obviously passed him by – ‘it all comes from Cliff Richard. Some people like Cliff Richard so why don’t you just get over it!’ These sudden outbursts and chunterings carry on as he, his set, his story, his pet fish Michelle, and the integrity of his technician collapse before our eyes.

The most successful moments come when he follows an idea through, such as spilling his pills only after we have carefully chorused the name of each day on his supposedly idiot-proof pill pack. Here pedantry pays off and is richer than bluster. We are caught up in his hilarious rapturous pacts with every God-head as he faces death. Then you realise it’s where we are all going, along the lonely path to death – in his case a dog-training tunnel with sharp metal bits that hurt. Wurtzinger handles audience interaction gracefully, dealing with a light heckle from a very elderly audience member who claims to be ‘already dead’ by turning the phrase into a useful call-back. The show resonates with current public deliberations on euthanasia and our vain desire for a dignified death. Goodbye Günther and Günther’s death are anything but dignified but they are very, very funny for all that.