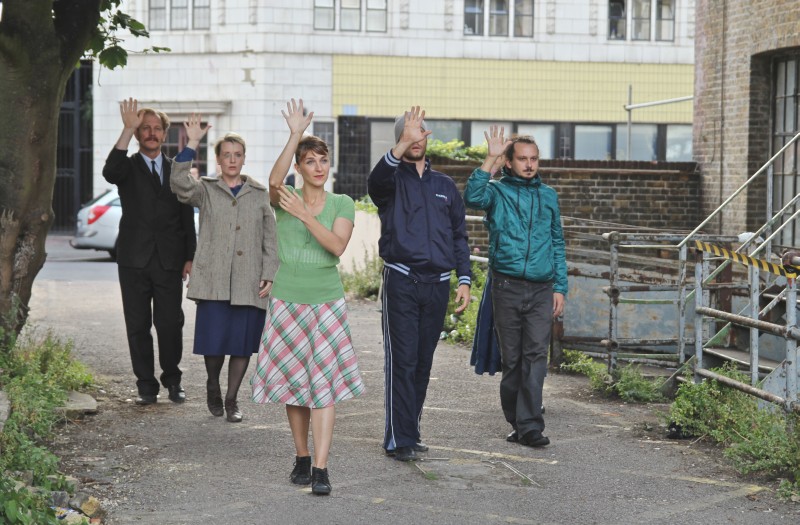 A travelling show for travelling people, The Ragroof Player’s Bridges y Puentes pitched up in Margate on a sunny summer weekend.

We gather outside a disused building in the unreconstructed part of town and are issued with passports. Around the back, gathered together in a huddle, we watch as six characters emerge from the street and begin a slow, choreographed walk towards us. Voices sound from suitcases (or so it seems) with snippets of stories. Who are these people wanting to join us? What are their stories?

Bridges y Puentes is a journey into the experiences of people who have migrated. Originally a co-production between Ragroof Theatre (as was) and Compagnie Vendaval, and first performed in France in 2012, the show has been reworked by new company The Ragroof Players and is made for each city in collaboration with immigrants to that place. In Margate, conversations with people in the once-posh Cliftonville area of town contribute to the text of the piece (via dramaturg and writer Dorothy Max Prior).

Next we queue for passport control where some are summarily told to step aside (a nice comic performance from Ivan Fabrega) and one is forcibly kept out (the outcast Matthew Blacklock). Our plight is witnessed from above by residents of the flats, dad and kids hanging out of windows and off the fire escape. They, and a man cleaning his car in the road, provide unplanned resonance.

The main performance space is gloomy, with some striplights, some metal fencing, and an uneven floor. Here the cast moves through scenes, the text becomes less fragmentary and stories unfold. A couple dance, the group swirls and disperses in a series of close-ups and long-shots, neatly directed by Marion Duggan. The show moves with and through the audience and is always audible and visible. Beautifully danced tango is the main choreographic motif, no surprise as the piece is inspired by the emergence of tango in the apartment blocks of Buenos Aires. There is also an Irish reel (nice footwork from performer and producer Anna Symes) and a final polka, to reference the largely East European and Romany incomers to Margate.

Given the limitations of lighting available, Chris Umney’s design is extremely effective. So too is the sound design, by Filipe Gomes, which swoops around the space providing just the right amount of interesting background noise.

Whilst it is a strong ensemble work, the performances of Carmela Acuyo Fernandez (also choreographer) and Anais Alvarado stand out; plus the mischievous musicianship of Estanislao Sanchez. Tellingly it is their ‘foreignness’ that makes their characters feel more real. A section in which all six are seen in makeshift homes, at first alone, then gathering into a gang which has to move from place to place again and again is particularly powerful.

If the themes are a bit overworked, Bridges y Puentes is a thoughtful and effective show. As we take a closer look at the installations that form a part of the show – suitcase tableaux, a collage of newspaper cuttings, and photos of participants pinned to the fence – the audience talks and tells their own stories, and thus we find a common language. It may not be tango, but, like life, it is a kind of dance.