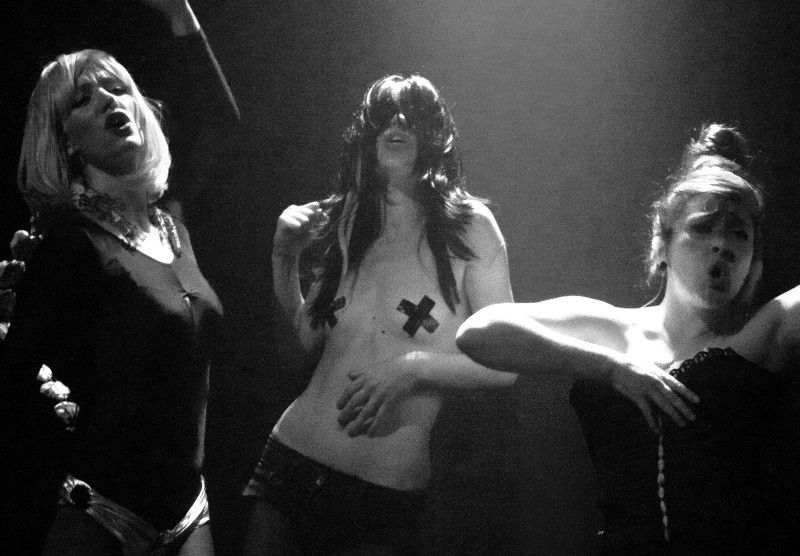 Kiln (formerly Kindle Theatre) are making great strides in experimentation with sound and vocal scores and the vision is potentially terrific. It takes time to ferment the fulfilment of the vision and maybe the Edinburgh run for these two shows is too exposing and too soon. Both shows come with haunting vocal scores. Aspiring music theatre pieces The Furies, a rendering of the story of angry Clytemnestra, and Lady GoGo Goch, an homage to Welsh women both mythical and real, deliver virtuosity of musicianship alongside promising physical imagery. Cleverly KILN have engaged the accomplished services of musicians of some quality that give weight to their skeletal works. Yet, ultimately both pieces compelled me, reluctantly, to ask for a clearer narrative. What are you telling me? What can I do about what you are telling me?

The Furies takes the form of a rock concert and perhaps this is where it might delve deeper. We are invited into the ‘gig’ by a male slave/usher/roadie who gives a brief wink to our processing with a ticket inspection. There is a brief exchange as we enter a room of dry ice and the sound of witch-like voices. There’s a big build up, as you get at a rock concert prior to the entrance of the headlining band. The three performers enter, their howling voices preceding their provocative bodies: one in a blonde wig, one that seems derived from Kabuki theatre and one more shamanic with a black wig and eagle feathers undercut by gaffer tape over her nipples. They all purvey different energies but we don’t get their names, rather, like the Witches in Macbeth, it’s one, two and three. Then ensues a series of numbers punctuated by inaudible text fragments, which pursue the rock concert territory. It’s physical, loud and not quite hitting its mark but its beginning is exciting and enticing and the musical strains are charged. The Kabuki character with the amazing voice has been wronged by her man and her sidekicks want to do something about it. The other two engage in a transient inaudible conversation about comforting her. There is one poignant solo moment when the one in the blonde wig sings a fragile song that seems to portray some kind of brokenness but she has her back to us so the full feeling eludes us and again we don’t quite get the ‘why’.

KILN seem to be playing with the avoidance of narrative, which is clear from the refusal to go there in this piece and, likewise, in Lady GoGo Goch. The Furies ends with the roadie/usher/slave helping the creatures off their perch – the central of the three platforms they have been flitting between throughout.

It will be exciting to see how KILN use their male musicians to further these pieces within the musical form and if they bravely decide to dramatically integrate them within the fabric of the work to do justice to the threads of undeveloped ideas inhabiting both pieces. The work pulsates with promise but the ultimate feeling is a void. How can Lady GoGo Goch coax from her Welsh ladies a reclamation of an identity for Welsh women, especially at this moment and here in Edinburgh in the shadow of a potential Scottish independence? How can The Furies urge action within a world that is fraught with conflict? What are the political outcomes and resolutions of the forked tongue, an affectingly poignant image towards the end of Lady GoGo Goch that has potential to neatly outline the elusive sense of the foreign-speaking Briton? And if we finally share the anger of The Furies what can we do about it?