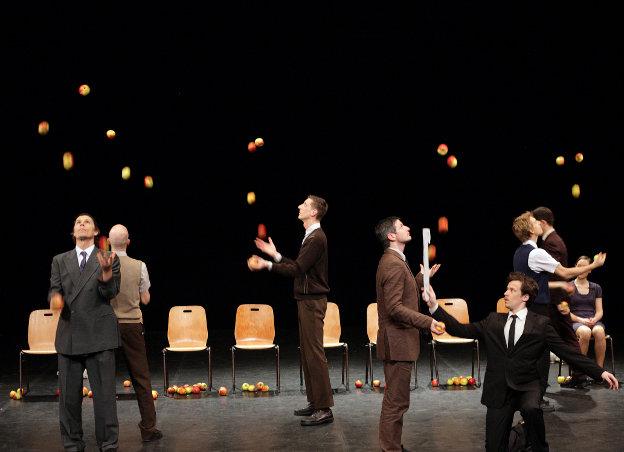 In this, their fourth visit to London International Mime Festival in their twenty-year history, Gandini Juggling present their most theatrical work to date. This represents the culmination of a continual investigation of the relationship between juggling, dance and theatre, aided not least by their long-standing relationship with the late, and quietly great, choreographer Gill Clarke.

In the original outdoor incarnation of Smashed, commissioned for the National Theatre’s Watch This Space Festival in 2010, Gandini Juggling continued their joyful acceptance of the failure of juggling, of the ‘drop’. This resulted in a light-hearted and zesty destruction of apples and crockery which celebrated the release that comes with accepting failure, accompanied by the performers’ mischievous disruptions of each other’s work.

For this new version, now indoors and extended, the material has taken on a darker, less benign feel. Artistic director Sean Gandini has acknowledged his debt to Pina Bausch, and this influence runs through the piece, with echoes of1980 and Kontakthof. Ostensibly, much of the material is the same as the outdoor version, but now the summer romance has turned sour. Instead of the light-hearted teasing, each of the nine jugglers prey mercilessly on each other.

What is central to this new version of Smashed is that Gandini Juggling have taken advantage of the juggler’s underlying relationship with power. The act of juggling imbues the juggler with power, merely through keeping their objects aloft. This power, which comes with a certain mastery over the fundamental force of gravity, is here translated into power over the other performers. Thus we see acts of humiliation, subjugation and isolation played out around and in-between the various solo and passing patterns.

With only two women, Kati Ylä-Hokkala and Cecilia Zucchetti, in the nine-strong cast, gender often appears as the key battleground. They crawl slowly in front of a line of seated men, moving platforms for tiny, self-contained patterns; and they are subjected to violent physical manipulation as they each attempt a simple three-ball cascade. In return, the male performers approach each woman to receive slaps on cheeks, stomachs or buttocks, each slap replacing one ball in the women’s cascades. Alongside these acts there is a dangerous and sultry frisson to the performances of Ylä-Hokkala and Zucchetti, who play-up their sexual power as all the performers ‘jockey’ for position.

In many ways Smashed is no longer a juggling show. Instead the juggling is one gestural vocabulary within the work, alongside the choreography and the personae of the performers. This last part is key in the impact of the piece: each gaze or response from the performers sets-up and develops the underlying relationships on the stage. All the while the audience is complicit in this developing action, as the performers seek their approval and play-up to their responses.

With Smashed Gandini Juggling have concluded twenty years of experimentation with an increasingly nuanced and complex theatricality. The question remains how this approach will develop over the coming years; how the use of juggling’s dramaturgy can be used to investigate a wider scope; and how Gandini Juggling can continue to marry their invention of intricate patterns with the intricacies of human experience.