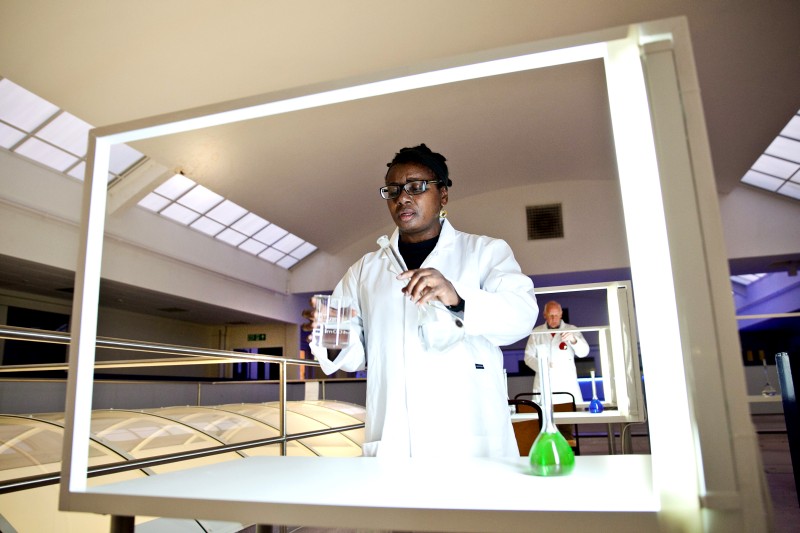 Well is a major commission by Creative Barking and Dagenham, the local Creative People and Places cultural regeneration project initiated and supported by the Arts Council, alongside the Paul Hamlyn Foundation, SOG and the Broadway Theatre Barking.  It builds upon Artistic Director Geraldine Pilgrim’s reputation for transforming buildings, established through the site responsive work she has pioneered over 20 years, to take over and animate a disused factory building in East London.

The former chemical manufacturing Sanofi Factory in Dagenham East is both the location of Pilgrim’s latest piece Well, and the heart of a private and personal, public and national identity. After 79 years of production, the factory closed in 2013. Geraldine Pilgrim re-opens its doors to reveal a biography of people and place with a series of light, sound, and performance interventions that respond to the architecture of the factory, its materials, machines, temperatures and smells, its functions and meanings to the communities who worked there. The nexus of relationships between its daily inhabitants of cleaners and factory packers, scientists and machinery, and the human role of producer and consumer, pokes and prods at our own relationship to medicine from a personal and historical context.

An early room’s museum-like display sets up this idea for the audience by arranging artefacts that reveal the factory’s history on a central table, circled by the history of medicine around the walls. Connections between the two are introduced which become a running theme throughout. Each audience member seems to find their own little nugget of information and a growing sense of the scale of this building’s contribution to local life is carried with us from room to room.

Sound designer Connor Mott creates a hive of productivity as the walls buzz and hum with the vibrations of activity, eerily calling us around corners and down staircases. The minimalist drones or catchy songs juxtapose the human and mechanical whilst delineating space but permeating its boundaries; calling and warning, inviting and intimidating. As each small audience group is lead through a series of installations, they create powerful responses – of admiration or reluctant repellence. Dark hospital quarantine scenes with masked doctors emphasise through contrast the relief of a compelling wind farm installation consisting of a single girl circling on the spot as I circle her, never losing eye contact.

Chahine Yavroyan’s lighting design takes particular effect as the audience promenades an expansive nave bathed in blue light. The piece peaks here at a climax of beauty and poignancy. Layers of harmonising voices are breathtaking. The a capella soundscape is created by rows of singers in white coats pouring liquids between three glass bell jars. The striking colours of blue, red, and green liquid pierce a sparkling monochrome scene. The long drawn out notes of a futuristic chemical choir create a sense of worship, awe and spirituality quite different from the tangible grinding of pills, humming of machinery, and physical making of a product in the greenhouses below. This starkly highlights the very human relationship we have with medicine and the complexities of the interconnectedness between science, health, and spirituality. As the choir is durational and constant, the pouring of their liquid comes to no conclusion and hints at the darker, never ending pursuit of alchemy underlying this heavenly scene.

With themes, content, and relationships so rich and abundant in this piece, the idea of making, grafting, crafting and creating something larger than the sum of its parts connects both the human and historical narratives. The piece is alive with local performers and contributors whose lives enrich the ethereal narratives of the factory’s past, and new narratives evolve with each audience member’s step through this beautifully dark maze. With a cast of 170 performers including former Sanofi employees, Well makes well the sense of loss at Sanofi’s closure by celebrating experiences that particularly appeal to those with a personal connection and creating anew that connection for strangers.

Well avoids the spectacle and increased audience agency that has been pushing boundaries in immersive theatre. What it does is sophisticated and subtle in its approach; the piece stays true to its heart – the people of Dagenham – creating grand narratives while celebrating local communities and individuals. On arrival we were a disjointed group formed on the grass, of friends of performers, local residents, couples, and one or two from afar, but on exiting we were all silently connected by our experience of this mysterious place and its context within the history of Dagenham and medical history as a whole. I wander back to the tube clutching my white paper bag with its blue and white pill rattling inside and muse over the anonymous prescription and its potential transformation via the cumulative experiences revealed step by step in my journey around the Sanofi.