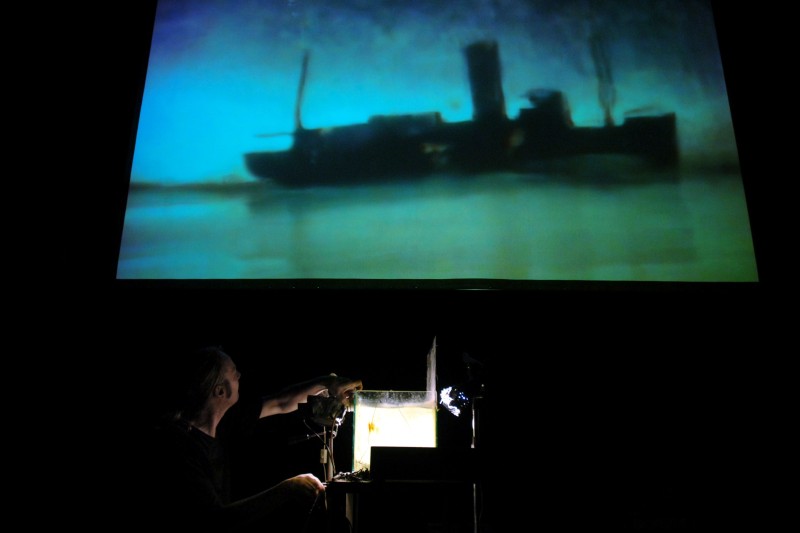 Cinematography is a precise and demanding business. Juggling angling, light and shadow, the right lens, the challenge of a smooth pan or unforgiving close up. As a theatre maker, such preoccupations feel fussy: I’m interested in the freedom of the live moment, immediacy and mess! So it has been provocative and mind-expanding as both artist and audience to encounter over two nights two whole shows devoted to the language of live feed, and experienced largely through the perspective of ingeniously moving on stage camera eyes, or ‘I’s.

In LIFT’s The Great War (24–26 June, at the Southbank Centre), Dutch company Hotel Modern, who specialise in work of this form, have conjured the maps, the mud, and senseless destruction of the trenches in miniature. Their handheld cameras are passed from person to person racing around the various tiny stages to capture the changing environments of the war, from parkland to wasteland providing what feel like the first hand perspectives of bespoke miniscule figures that stare and wait, aim and fire, fall and disintegrate into shallow graves. The company demonstrate a delight in the material – hands plunge into soil, moulding and banking trenches and pools, there are a host of witty plays on scale with carrot tops standing in for trees, a bicarbonate of soda snowfall that in one compelling sequence leaves bodies fizzing into decomposition. This revelling in the objects has it apotheosis in the on-stage work of sound designer Arthur Sauer who performs alongside the film’s action creating a sensational foley soundtrack with a mixture of identifiable instruments, assorted objects, his body, and voice. The energy and invention as he dives between petal percussion to reach the mic in time to deploy a train’s whistle, or conjures a mustard gas drop by lighting a match, or recreates sucking mud by rubbing and slapping his skin, are completely compelling.

The great strength of this show is in the visceral, first person styled perspective conjured by the camera’s gaze upon passing marching feet or the view up the end of a periscope. These visions are accompanied by occasionally stilted readings of letters home from war experiences by what seem to be a number of different soldiers. A little more context to those accounts might’ve made their descriptions more compelling – although they’re apparently true life accounts, at times they felt simply like a litany of stock World War I experience and this can alienate. The show also suffers from being over-illustrative: the inventively conjured images often appear exactly as they are described to microphone which has the affect of setting up a rather steady rhythm. The visual surprises, when they come, happen in moments freed from voice over, when the company give themselves free rein to simply play with soil and water, dry ice and carrot tops. 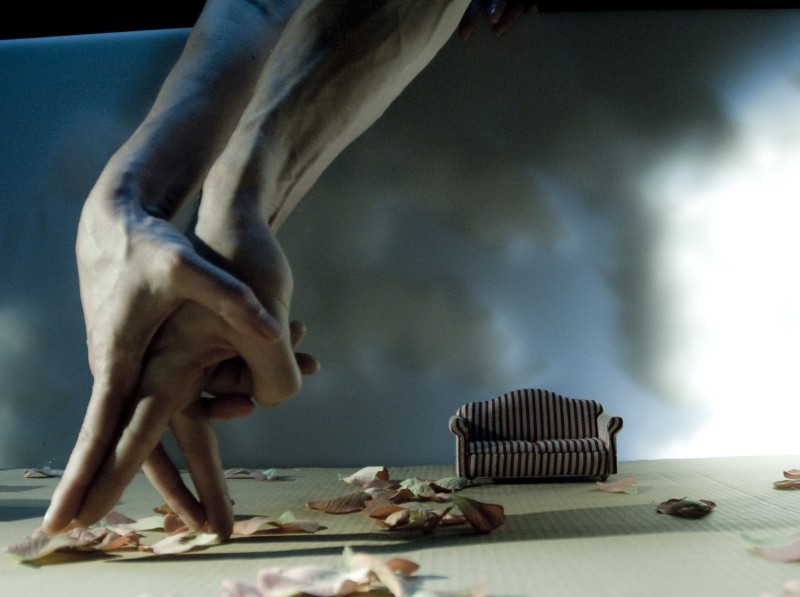 Dance-film production Kiss & Cry (at the Barbican, 25–28 June) takes a more oblique approach in both the story it tells and the form in which it is told. The ambition of Belgian company Charleroi Danses to create a dance performance using only their hands already places the focus of the piece squarely off centre. Writer Thomas Gunzig’s narrated story of one woman’s five loves is similarly odd, littered with wise-sounding aphorisms that twist into glorious non sequiturs (‘Some loves are like an onion. Dry on the outside, then they make you cry. In the end they are hard to digest’), setting up a surreal, self deprecating tone. These lost loves however provide a sturdy structure for the first three quarters of the story against which the visual play of the film and bodies can run riot. The theme of memory is superlatively filmic: its odd effects in turn playing incidents writ large across the mind’s eye, and at others sweeping them away into unexpected pits of forgetting. The company creates concrete worlds that realise memory’s palpable, ineffable mechanisms: hundreds of people and incidents shunted into drawers and boxes; the ways a specific memory of one time and place can seamlessly cross fade into a seemingly unrelated image or sensation.

If a love of materials animates for Hotel Modern, here it is movement that fuels the production. Though the camera’s focus is squarely from the wrist down the company at times invite us to consider the choreography around it – the beautiful and tender contortions that frame the strange images on screen. Appropriately enough, this is a piece in almost constant movement, from codified courtly hand dances, to rushing sweeps down unexpected black holes. To fuel this language the company have created elaborate technical apparatus including a dolly which stretches across much of the stage, a high-definition camera attached to a toy train, a special rotatable set with in-built camera that does very odd things to your sense of perspective and gravity. The effect is of a kaleidoscopic journey down the rabbit hole of the mind, wildly creative yet littered with identifiable moments figured in the most unexpected forms. Our protagonist Josephine is sometimes a hunched figure, handbag in lap, waiting patiently, and remembering on a bench, but more often an astonishingly expressive female hand (this and all parts taken by multiple members of the on-stage ensemble whilst others rush from post to post setting up the next camera, cuing sound) and the production is a masterpiece of the expressive power of good choreography. There are laughs of recognition from the audience in every relationship scene – we see ourselves in the rhythm of advance or rejection, the twirls of wild hopefulness in this most abstract of languages.

Charleroi Danses are a company who specialise in dance on film and the sheer quality of their technical nous supports them to make some wildly ambitious and beautiful images here using light, colour, live projection, and shifts in perspective so slick as to occasionally feel alienating: it’s hard to remember that these images are being made before your eyes. Play with mirrors and superimposition illustrate the strange creativity in this most human of tools. Their expertise, coupled with the energetic inventiveness of the form make this an astonishingly moving and evocative performance that celebrates human dexterousness and fragility through the medium of a single hand.

And it is the energy and effort of these two companies, dashing from set up to set up across the stage, literally throwing themselves into strange contortions and odd materials to conjure images, making themselves do it live, that transforms this work from the cinematic to its more humane and (for my money) powerful sister, the theatrical.