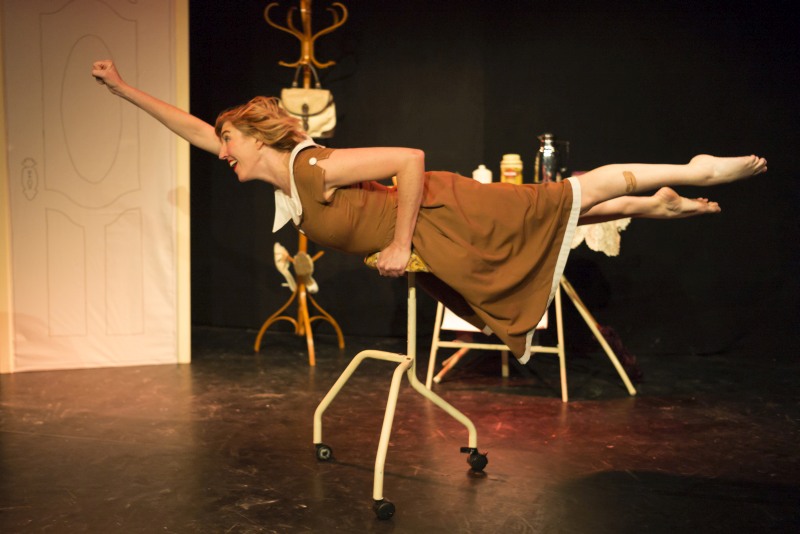 In Echolalia, solo performer Jen McArthur brings to life the story of Echo, an autistic woman inhabiting a world made tiny by her own hand. Within the walls of her simply furnished little house, she is safe from an outside world that seems to overwhelm her. Inside these restrictive parameters, Echo has created an environment filled with imagination and a surprising amount of fun; her story is told with an engaging mixture of playful clowning and physicality which gives life and voice to the everyday objects around her and effectively illustrates her daily routine. It is this routine that Echo relies on, the repetitive gestures, constant counting, and tick charts that help her to function. The narrative is aptly driven forward by a clear and tangible need: Echo wants nothing more than to get out in to the world and find a job. Yet the barriers here too are of her own construction, with seemingly endless reasons created to stop her getting out of her own front door.

McArthur has created an absorbing world here and a character who an audience can really care about. There is a warmth and humour to Echo that translates well despite (or perhaps even due to) her inability to communicate clearly or understand social norms. Because her need is so clearly expressed, the stakes are particularly high throughout, keeping the story engaging even when a sense of frustration builds as she repeats and repeats her routines and seems to get no closer to her objective. The immense sense of endeavour is particularly touching, with Echo using the disjointed repetition of motivational phrases heard in films (the titular ‘echolalia’) to spur her onwards and to battle her fears.

Clever use of audience interaction helps to illustrate how Echo views the world, and these transactions are handled seamlessly by McArthur, who transmits a real sense of energy and purpose on stage. Winner of the Best Solo Show in the New Zealand Fringe Awards 2011 and co-winner of Best of the Fringe in Dunedin, the production translates well to the Edinburgh stage and the relatively intimate atmosphere of the Gilded Balloon’s Dining Room serves to heighten the tension well.

As the story progresses, McArthur utilises elements of contemporary dance to show how Echo’s frustration with her inability to leave her house grows, resulting in a climatic ending which is well structured but could perhaps have contained a little more detail and development. Yet, it is perhaps in leaving one with this feeling that Echolalia most succeeds as a production: having been thrown in to Echo’s world, I didn’t want to leave, and was eager to know what would become of her.