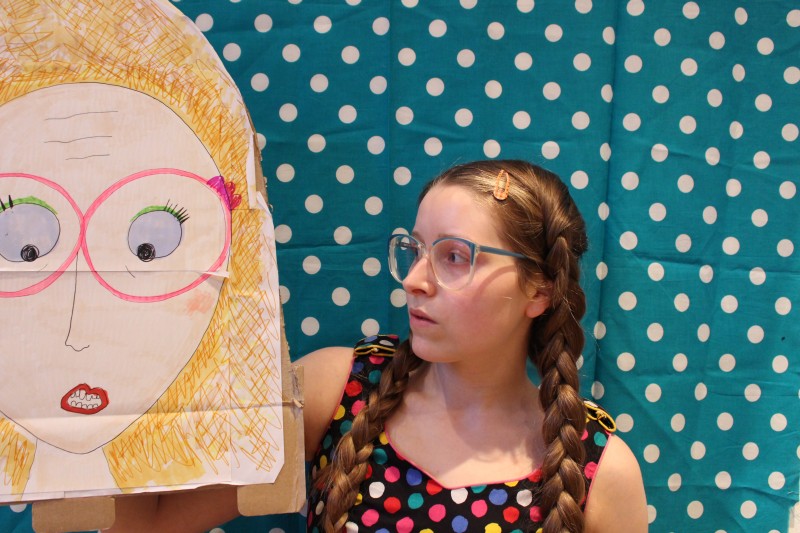 I Loved Her tells Jessie Cave’s true story about making a baby with a one-date wonder, and salvaging a relationship from the fallout. Part character comedy stand up, part live art with cartoon masks and dodgy shadow puppetry, the shrill tension between the sharp subject matter and giddy form of this show makes it a unique and interesting clash of performance and private life.

Jessie adopts the character of ‘Jessie’ to deliver her tale: an unapologetically neurotic, quirky -in-the-constructed-way, fast-talking, over-sharing, social media obsessing twenty-something young mum. This heightened version of herself feels deliberately close to the real thing. Dressed in a frumpy frock with huge nerdy glasses and plaited pigtails down to her waist, she is styled as a pastiche child star, grown too big for her gingham. Cave shot to fame playing Lavender Brown in the Harry Potter films. Since then she has tumbled through theatre acting, youtube video making, drawing, and becoming a mother at high speed. The Jessie we encounter on stage embodies all of the chaos of a young woman growing up on Instagram in the blurry gaze of the public eye. She plays a Jessie who is so full of modern anxieties, whilst still being packed with the magical idealisms of a young starlet, that I can almost picture her clicking her heels together at any point and truly believing she might wake up in Kansas.

This is a storytelling show, in a loose sense, as Jessie recounts the basics of her fateful first date with comedian, and now father of her child, Alfie Brown, using the medium of self-proclaimed ‘shoddy’ shadow puppetry. The rest of the performance becomes more like a stream of consciousness weaving together snippets about her neurotic behaviours and anxieties in reaction to being thrown into parenthood and a relationship at speed. The intensity of her neurosis and demonstrations of her anxiety are painfully palpable and sometimes feel too much. Jessie’s unstoppable, full throttle delivery make her accounts somewhat more digestible. Her inability to hold back when she tells us that she ‘masturbated in-front of the Great British Bake Off’ before her first date with Alfie, along with other multiple over-sharings, offer humour and soften the madness, helping to keep the audience on side.

There are times when it feels a little difficult to stay with her though, or even keep up. The dizzying speed at which Cave talks seems fitting for the subjects she is exploring, however, I wonder if some moments of calm, stillness, emptiness might aid in making the frenetic movement of this show somehow sharper and the humour of her performance brighter. There are lighting changes and the use of music, but these never seem to alter Cave’s state, she is a runaway train, blazing towards telling you anything and everything she has ever thought. Of course some would describe this as the Lena Dunham-style charm of the show, but I am left with a niggling feeling of dissatisfaction. These are truly heart pounding, poignant slices of life that Cave is delivering to us, but they feel just out of reach to truly chew over for myself: perhaps I would like a little more space for my own reactions, or perhaps she really is just too fast for me. Either way, it’s surely worth attempting to catch up with her somewhere and I will follow her rapid movements with interest.