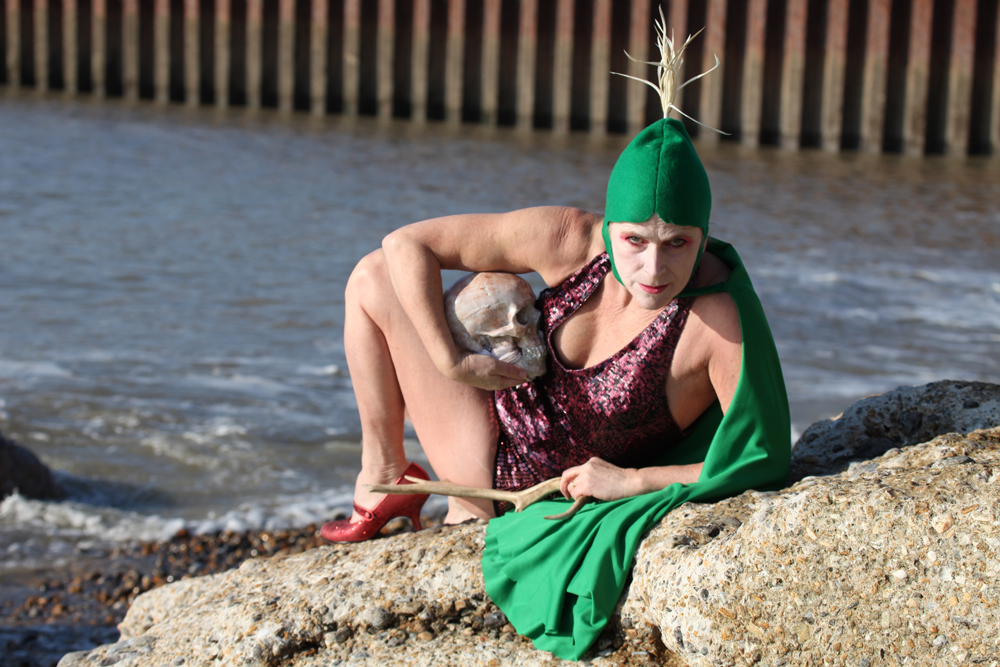 5–4–3–2–1! Con-fused? Be-mused? Don’t be! It’ll be alright on the night… Liz is here – whether to meet and raise expectations or lower the barre we don’t yet know. Will she please us – or will she please herself? We wait with baited breath: ‘Don’t move a muscle!’

Ta-rum! Here she comes! Liz Aggiss IS the English Channel: a go-go dancing vessel for the spirits of a splendid array of cultural icons, from Cheeky Chappie Max Miller’s saucy innuendo to Pat Simmonds’ plumy-toned Speaking Clock, via the theme tune to The Adventures of Robin Hood; a medium conjuring the ghosts of dance past, present and future, who all remind us that death is just around the corner. Dance past includes a lovingly created homage to German tanztheater guru Kurt Joos and his Dance of Death. Dance present sees Liz twerking like there’s no tomorrow, do or die, as she sings ‘Too tired to fuck’, an anthem to the eternal entwining of Eros and Thanatos. Dance future is a grinning skull, beckoning – but not now, not yet. There’s life in the old girl yet… ‘You stay there!’ she demands of it.

For anyone familiar with Liz Aggiss’ work, her latest show is reassuringly packed with familiar subjects, themes, motifs. Popular dance (twist! disco!); vaudeville and variety (Max Miller’s cheeky chappie innuendo, Lily Morris’s comic music hall songs); and mockery (sometimes self-mockery) of the concerns of women about body image, as she rearranges her bosom, flexes her biceps, hoists her tight green lurex skirt up to her arse. She’s the queen of postmodern performance – and there sure is a lot of that about, but the difference between Queen Liz and so many of those who followed in her footsteps is the skill and the love – her work is chock-full of allusions, a pick-n-mix from a hundred years of high and low art and popular culture, and there is certainly irony and humour, but we feel the respect, note the knowledge, admire the very clever interweaving of references. More than the sum of its parts, is this.

Liz Aggiss is a groundbreaking choreographer and dance-theatre performer, but also a pioneer of ‘dance film’. Here, film is an integral part of the piece, the whole of the back wall one big screen on which found footage (the first woman Channel swimmer Gertrude Ederle; eccentric dancers The Ganjou Brothers & Juanita) is lovingly edited together (by Joe Murray) with specially-made vignettes mocked-up to look like found footage. These include a tribute to the fabulous Florence Foster Jenkins, who resolutely followed a career as an opera-singing soprano, despite a complete lack of pitch or rhythm, brought to life magnificently by Emma Kilby; to androgynous German cabaret singer Claire Waldoff, played with perfect pitch by Lisa Wolfe;  and to grotesque dancer Isi Te Je, brought to life by contemporary dancer Antonia Gove.

As is the case in much of Liz Aggiss’ work, film, costume, and props all contribute to a piece that is driven by a marriage of choreography and scenography. Live art. Moving sculpture. Objects are important. Clothing isn’t merely decorative, it changes the body’s movement, it informs the choreography. Often, the performer’s body is deconstructed or distorted or extended by what she is wearing: a black penitent’s shroud covers her head, but exposes her legs, making her look like a mini-skirted Klu-Klux-Klan member; an enormous metal claw with excessively long fingers weaves through the air, both menacing and mesmeric (referencing Kay Lynn’s Finger Dance); her Max Wall bulging bottom channels the Bouffon, looking down at the world and laughing. At times, she seems to be almost puppeteering herself in a complex animation of body and object or clothing.

Sound design must be mentioned too: Alan Boorman (aka Wevie, as in legendary alternative music combo Wevie Stonder) does a brilliant job, weaving together his own quirky compositions with a whole raft of found sound, classical piano (featuring long-term collaborator Billy Cowie) and pop classics that ricochet from music hall to psychedelia via Klaus Nomi and The Dead Kennedys.

Made as she hits the big 6-0, Liz Aggiss is The English Channel reflects on the conundrum of being a dancing OAP, and offers us a kind of clownish mockery of the approach of death, less whispering in the wings than calling mawkishly from centrestage. A poignant scene towards the end sees the stage detritus gathered up rhythmically and methodically into brown paper bags as the Speaking Clock announces: ‘At the third stroke…’ and Liz adds: ‘Paralysis… a blinding headache…’

But not yet, not yet! There’s more dancing to be done! Cue a wild punk-inspired anthem, expunging the devilish monotony of a rote-learning, seen-but-not-heard childhood littered with requests to sit up straight, hands on head. ‘Have you calmed down yet, Elizabeth?’ our headbanging PVC-clad veteran punkette screeches in mockery of that long-gone but not forgotten 1960s childhood. No, she hasn’t. Thank goodness for that.