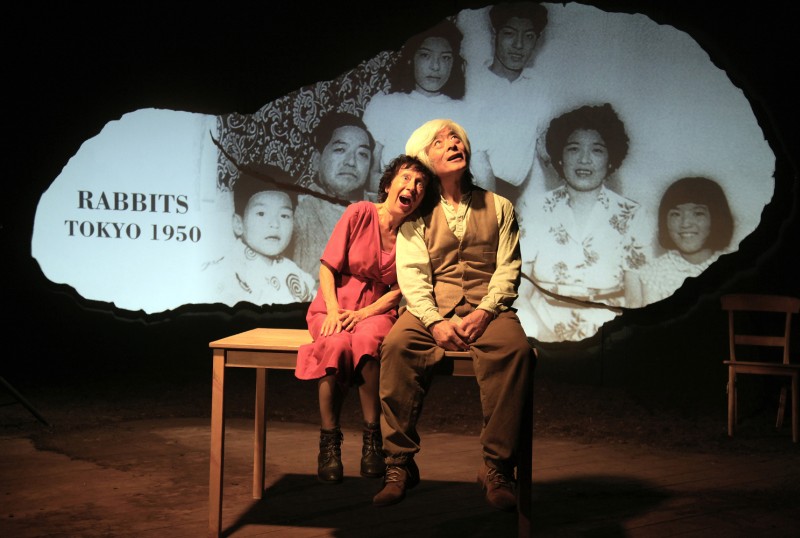 The small, thrust stage is full of voices. Moving bodies hurry from side to side. Fragments of stories start and stop, overlapping and interrupting. There are a number of reasons this feels exceptional. The cast is unexpectedly large – ten performers plus a musician – who remain with us in the space throughout, sitting on either side of the stage in the front row or changing in full view in the corners. And all of them are aged at least 60. It isn’t until you encounter a stage full of older performers that you realise how unusual this feels. There are trends being bucked here: Visible – Britain’s only professional theatre ensemble made up entirely of ‘older’ performers – operates outside the economies of scale that constrain many theatre makers in this country and its very raison d’être is to create meaningful performance opportunities for such artists whose work might otherwise be being sidelined.

So what do they do with these intriguing principles? They have collaboratively devised a show that only they can tell. Each individual reaches into their own family and personal history to recount the lived experience of events from just before the outbreak of the First World War to the present day. Writer and Artistic Director Sonja Linden (previous founder of iceandfire) selects a dizzying array of story fragments that crosses continents and class to achieve a genuine sense of history in all its clamorous multitudinousness. As each painful, joyous experience is recalled or recounted other company members effortlessly complete scenes round the teller using simple physical storytelling, live music and considerable performance skill (which is to be expected from a company whose experience spans most major theatre and dance companies in the UK) accompanied by dynamic video and lighting design which very effectively shift tone and atmosphere. It’s real ensemble storytelling and the feeling grows that we are witnessing something summative in its rich variegation: the sheer weight of stories accumulate as a sense of history moving through time and across the globe.

Of course, such stories are not in fact the preserve of individual memories or at least in this, of all years, don’t feel like they are. In 2014 we have been drenched in recollection and histories of the trenches and tales of the wrenching partings and indignities of the Holocaust are all too familiar. The first half of the play, which covers these periods, can sometimes feel muddied by familiar tropes, the personal detail of the stories getting lost (although there’s a theatrical coup in the presentation of the nuclear bomb as the ending of an era). Where the storytelling comes in to its own however is from the 60s onwards and it’s no coincidence that this too is where the performers start to tell their own memories rather than sharing stories from previous generations. As its material is more fully owned the power and impact of the form they are working manifests on stage in full heart and voice (literally, in a virtuoso solo rendition of Aquarius / Let the Sunshine In).

What perhaps feels most profound is the gradual realisation that the material doesn’t only transcend the personal but transcends the physical age of the bodies before us. This is a testament to both the form the company have devised and the considerable skill and verve on display in its performance. Theatre is, notoriously, a young person’s game, but in a closing sequence set in a registrar’s office at the hospital we completely share the storyteller’s frustration and horror about being gently but persistently patronised for her age – it simply feels preposterous. This show stops you looking at the physical limitations of age and time and genuinely, openhandedly shares the person underneath. Beautiful.