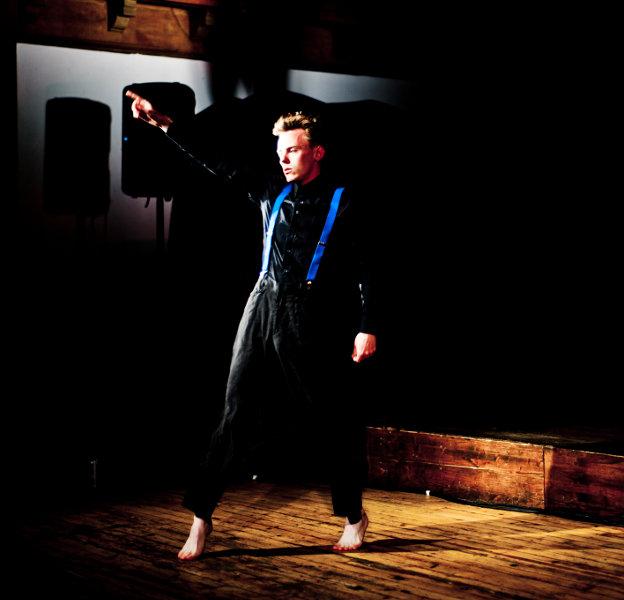 Presented under the auspices of ‘east. by. south. east’, a collaboration between key venues in those two regions, Made in China’s We Hope That You’re Happy (Why Would We Lie?) is a strange beast, in the best sort of way – an interesting mix of new writing and physically embodied, really there, live art performance. It took me a while to be won over, but won over I was by the time we got to the end.

But wait, let’s start at the very beginning…

As we enter the space, we see a young female performer standing on a table, bare-legged and dressed only in a black nylon underslip. Gestures of self-consciousness, if not actual awkwardness – pouts, nervous smiles, tugs on the underslip, etcetera. Once we are seated, a young male performer enters, looking straight out of the 80s – all Bowie-inspired trews and braces, black shirt and tousled hair. Our two performers use their real names (Jes and Chris) onstage – and who is to say what this means in this play between truth and fiction? A stylised dialogue starts up, a kind of litany listing truths, half-truths and lies – and who is to know which is which? Trivialities and things of monumental importance sit side-by-side – stolen ice-creams, hangovers, London tube bombings, thwarted picnic plans, a plane crashing into a city skyscraper… it’s all as important or as unimportant as you want to see it. Weaned on Forced Entertainment’s Speak Bitterness, I find myself thinking.

But as the piece progresses, the two performers settle into their onstage relationship – a kind of pseudo-sibling rivalry in storytelling, playing with the nuances of their real and imaginary relationship (in one moment they are claiming they were inseparable as children, and lived next door to each other, and the next minute we learn that she is American, but he is Canadian) – and really make the material their own as they spin a web of words around us. The words weave bigger and better webs – the real-life lies and made-up truths, false memories and true imaginations all mulching together beautifully.

The call and response listings of things seen, felt, laid claim to and lied about are punctuated by physical actions: an intermittent robotic dance sequence to ‘Rebel Rebel’, that returns and returns again at an ever-increasing pace; a drunken sway to ‘If I Had a Hammer’; a ritualistic dousing with flour, ketchup and water; and an endless number of ice lollies sucked, and beer cans opened, drunk from, and chucked aside. Ultimately, it’s a coming-of-age tale: if you had to define ‘adolescence’ it is surely the brief time in your life when ice cream and beer assume equal importance?

By the time we’ve reached the end, I feel that I’ve witnessed a very carefully written and effectively realised piece of theatre, words, physical actions and visual images all balanced beautifully – and in both performers (although perhaps particularly in Chris Bailey, who I was drawn to constantly in this production) seen evidence of a really special performance talent.

A mention also to off-stage company member Tim Cowbury, who is one of a growing number of young playwrights crossing the worn-thin dividing line between ‘new writing’ and ‘performance’ and who, with Jessica Latowicki, is the co-founder of Made in China.