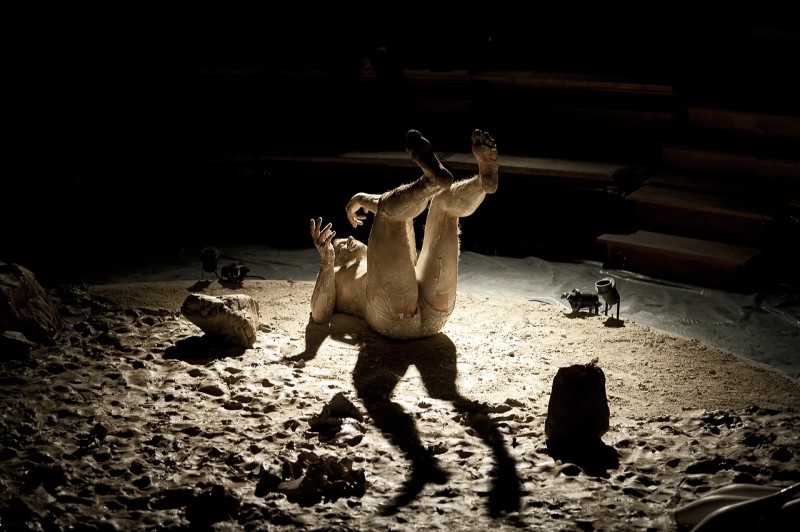 Presented at the Wickham as part of Bristol’s inaugural biennial festival of circus performance, Circus City, L’Homme de Boue (The Mud Man) is a collaboration between French artists Nathan Israël and Luna Rousseau, and one of a handful of shows from outside the UK bringing a distinctively European sensibility to the festival. We perhaps see more circus shows that are about the skills first and foremost, but in this unusual and compelling one-man performance, the skill – in this case juggling with clubs – plays second fiddle to the piece’s explicitly existential preoccupations.

Naked except for a pair of tiny grey boxer shorts, Israël stands before us on a circular playing space covered with clay in various states of wetness. There are a few boulder-sized hunks distributed about, and a clutch of white juggling clubs is propped against one of them. A serious-seeming, thick-set man, Israël looks more like a rugby player than a circus artist, and when he takes up the clubs and begins to juggle, it has all the ritual of the haka, the slap of the clubs as they land neatly in his palms creating a rhythm, like a heartbeat or a ticking clock.

It’s always seemed to me that juggling has something of an endless pursuit of the sublime about it, and L’Homme de Boue seems in part to be a manifestation of the tension between this and a counter urge: to return to earth – quite literally in this case.  It’s not long before Israël’s rolling around in the clay, slathering himself until he’s slick and encrusted with chalky fragments. Returning to his feet, he’s at once statuesque and bestial, heaving a mound of clay up into the nape of his neck and staggering about, his chin pressed tight against his breastbone.

Throughout, Israël seems to be seeking some ultimate communion with or expression through the clay, and, notwithstanding his sincerity, there’s much humour to be had on the way: he parades around with clay as a courtly cap on his head, creates a whole-head clay helmet, and at one point buries his head in clay and remains upturned and static in a near-reverie. In one of the piece’s most effective sections, he juggles with three chunks of clay, alternately tossing one aside and creating a new third chunk from the remaining two, until they’re tiny flecks and disappear completely. And throughout too, just a few feet away from him, we are aware of the clay’s physical presence and properties – its weight, its earthy smell, its coolness to touch and its limitless malleability.

Before entering the theatre, we’re given a poem to read, which extends on the show’s copy by suggesting that the piece is concerned with the ‘disturbing’ universal primal instinct to return to the mud from which we all emerged. That it was felt necessary to supplement our experience of the piece in this way perhaps says more about a perception of audiences’ expectations  of circus work than the impenetrability of the show’s ideas. For as an exploration of this instinct it’s eloquent and engaging. Whilst there’s a contrivance to the piece’s cyclical structure that perhaps prevents it from taking us anywhere too uncomfortable, Israël’s no-holds-barred performance gives us both the anguish and ecstasy involved in pursuing unaccountable urges and desires. L’Homme de Boue risks sharing an impulse with us and dares us not to feel the same.