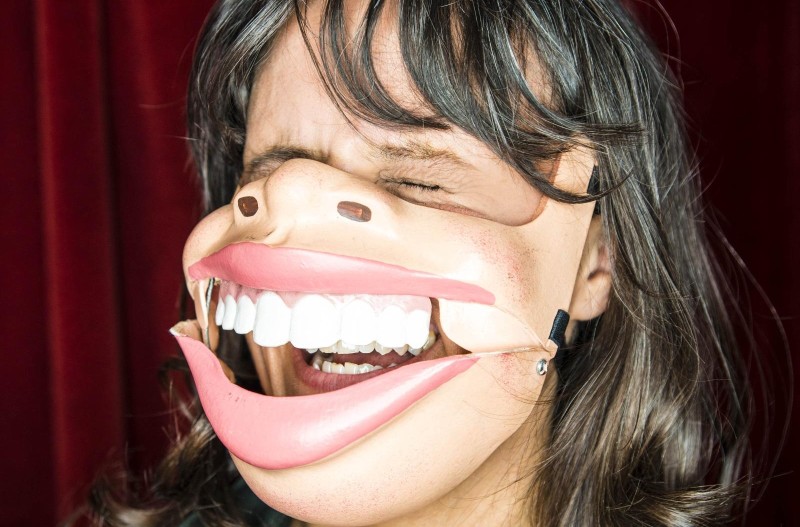 Nina enters without her familiar alter ego the vent puppet, Monkey. His voice is present though, and assures us that she is shit without him. This is not true but all the same we begin with the kind of belly laughs that begin to hurt by the end of the hour of mesmerising skill, wit, joy, and brilliance that ensues.

This is Conti’s improvised show, different every night depending on its audience, so we start with Monkey and Nina picking audience members out for some general chit chat, to see who might be interesting candidates to bring up on stage. ‘What do you do?’ asks Nina to a girl in the front row, ‘I’m a hairdresser,’ ‘Then why haven’t you got your fucking roots done?’ Monkey retorts at quick fire speed, audience and girl laugh loudly. The show is premised on Monkey’s role as the stream of dirty consciousness that we all hold quietly inside our heads when we are meeting people and silently judging. I begin to see the magic that makes him work as an alter ego: Nina’s ability to channel her inner tic of a voice into this disarming dummy allows us to laugh at our most pathetic, fantastic, and hilarious internal monologues, although she is perhaps gifted with a wittier monologue than most.

But Monkey isn’t the main character in this show: we are, and Conti has found an intriguing way to incorporate us to her art form. A select number from the audience are invited up on to the stage in ones and twos to don Nina’s ventriloquy masks, essentially turning them into living life sized ventriloquy puppets that Nina operates. She assesses the mask and body and creates a voice and character that never fails to astound, formed in seconds with equal parts ridiculous and genius. One pair of friends become a Shakespearean actor and a dim, sporty teenager. Nina has them compete to show off their skills, and at these points, when the audience members have to try and improvise along with Nina I can barely keep my eyes open I laugh so hard. The image of the masks are inherently funny; oversized lips and bulbous noses strapped across the face, combined with the awkward gestures and laughing shakes of the human ventriloquy puppets on stage, creating an arresting and stupidly hilarious visual treat.

There are of course sections where Monkey returns, at one point to play guitar, at another to hypnotise Nina into a sleep trance while he talks to us, some of this fails to fly, but as Monkey is allowed to acknowledge this, Conti can reclaim even those moments that aren’t entirely working. Her energy, charm and talent are beguiling, seemingly oozing cool confidence and handling her craft with complete artistry. She has adapted and updated an unfashionable form of stage-craft with such unique style and intelligence that it sings with life and relevance. Conti makes the art of being silly entirely smart, wondrous and life affirming.