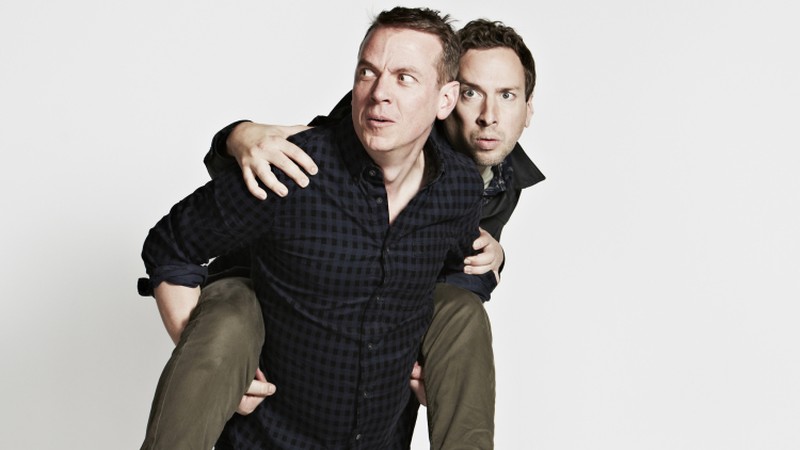 Dressed in nicely designed pyjamas, Shenoah Allen and Mark Chavez amuse each other and the rest of us with their silly, semi-improvised spoof of Dumas’s novel. Using just two chairs as set, and accompanied on several instruments by a very talented musician, the plot provides some sense of a logical journey through the daftness, with both performers playing multiple characters en route.

D’Artagnan leaves his avant-garde farm to look for adventure in Paris. He rides there on his talking Centaur, which bears the sign ‘If you’re reading this then you’re probably riding me’. Upon arrival he meets the musketeers and engages in a mission to protect the Queen’s honour, and dash the grotesque Cardinal’s dastardly plan to humiliate her.

Allen and Chavez make a great partnership, listening closely to each other for the inklings of new ideas and frequently seeming to surprise the other. It’s their relaxed playfulness that makes this so watchable and it’s difficult to tell how much is improvised and how much prepared. I would guess they set up structured games to riff within as when the Cardinal demonstrates how he will return the Queen’s jewels saying, ‘Excuse me, are you looking for these?’ His sidekick suggests to that he might play it up a bit, and there follows a variety of strange attempts to do so which surely must be different every night.

The humour comes through the inventive silliness of their ideas, such as when the executioner tells the Queen he will cut off her body, then throw it in the river and try and hit it with her head, as a game for himself. Or when the mysterious woman says, ‘Rub the moles on my back… they spell out “beautiful woman” in braille’: it’s not a punch line to a gag, more like an oddly amusing thing to imagine. On this occasion I personally rarely laughed out loud, but I suspect this was my mood on the evening and they certainly impressed me with their skill. The man next to me was certainly having a hoot, as were very many others.