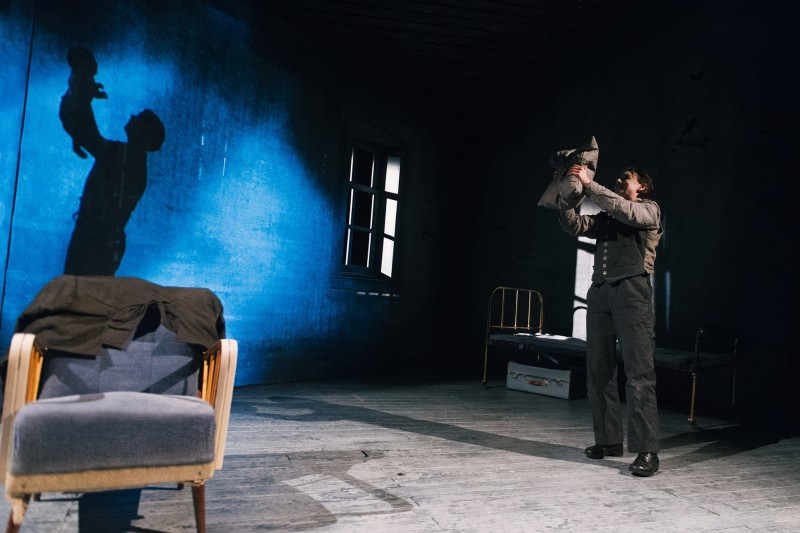 This stunning solo piece fully captivated me right from the start. Originally performed in 1987 (with Tilda Swinton in the role), Manfred Karge’s gritty play is enlivened in a new translation by Alexandra Wood with the excellent Margaret Ann Bain as Ella. The pre-set introduced a stylish design: a sparse room with basic furniture (including an iron bedstead holding a slumped figure), decorated by sophisticated projections that along with stylised lighting and muted sound effects created a palpable atmosphere of foreboding.

We are introduced to Ella, a woman living in twentieth century Germany. Out of necessity of circumstance following her husband Max’s untimely death, Ella makes the unusual decision to impersonate him in order to survive. Bain characterises Max exceptionally well, in gruff Scottish accent and with fully developed male physicality and attitude. Conversely, her ‘real’ and female self seems less believable, and as the narrative progresses, Ella indeed becomes more and more entrenched in ‘becoming’ Max, long after there seems to be any logical need to do so. Indeed, she even states at one point that if she stops, she will have lost him, and gradually, the toll on her mental health becomes ever more apparent.

The performance challenges of performing a 75 minute monologue are significant, but I remained enthralled throughout. In part this was also due to the well-choreographed movement (created by Directors Bruce Guthrie and Scott Graham, whose backgrounds in work with Frantic Assembly and The Curious incident of the Dog in the Night Time are clearly apparent here) which included suspension and frenetic pace. Strong visual elements including unusual use of shadow play to reveal subtext (as Ella holds a pillow it becomes a baby in shadow, for example) were also strongly impactful.

Ella’s story is itself startling, highly tense from the start as war approaches and Hitler gains ground. Ella survives by first taking on her husband’s job as a crane driver, and later becoming a soldier and then a labourer. The context of these decisions is carefully explained, but I still had to suspend my disbelief here to an extent – I wasn’t wholly convinced Ella would be able to drive a crane after merely hearing her husband talk about it, but the piece encourages us to accept this due to its abstract performance style. Ultimately, if we are willing to accept an actor hanging from the ceiling dancing with a dress that appears from nowhere we must too accept her story, executed as it is with such skill. Bain’s extremely nuanced and powerful delivery coupled with the visual aesthetic leaves lasting images that make Man to Man affecting and quite special.