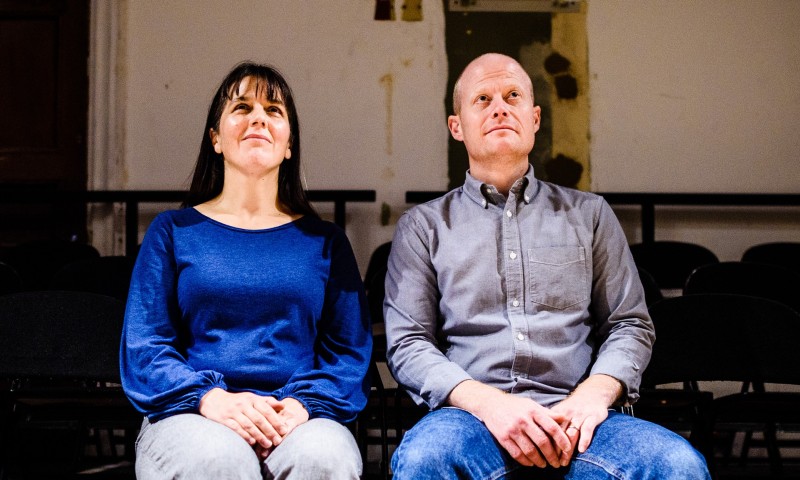 A House Repeated  is a video game stripped down to its framework of commands and voice prompts.  But these are described and narrated by Seith Kriebel and a female performer, who personify a virtual and specific site, revealing a fantastical imagined world based on Battersea Arts Centre itself. The duo divide the audience into two teams who sit opposite each other in a minimally dressed studio. Running two stories in parallel, the audience (who never leave their seats) visualise their tour with the guidance of Kriebel’s concise descriptions. Each performer takes turns to offer their team a description and three options to navigate a journey until they find each other in the same room and are transported into a re-arranged plan. The battling teams then shift to share the narration with Kriebel, playing with the second performer who becomes our protagonist in the hot seat.   As an audience of immersive theatre, indulging in vivid descriptions – from a witch’s hut to a man in a tower with a hundred eyes who never sleeps – becomes quickly over-shadowed as the piece turns into a fast-paced game. The descriptions themselves are rich and inconsequential, forming a diversion from the journey towards a mysterious goal that half the audience seem to already understand.

Moving from description to question to command, there is little time given to establishing the framework and language needed to access this work, which is disorientating at the start. Those in-the-know are those who are familiar with early computer games and for whom choose-your-own-adventure stories mean something. After being instructed to talk to each other before choosing one of the options outlined in a series of multiple choice questions, audiences become divided by ‘gamers’, who in turn divide themselves into subgenres and the rest into non-gamers. Watching this piece with three friends who access the form with surprising determination enlightens my experience. They make a shared community of gamers, analysing others’ responses and placing value on interpretations based on a language that is foreign to me. The rigid framework of options to navigate the imagined space is frustrating for me and liberating for them. Kriebel’s clever and complex responses to our answers draw on extensive preparation and improvisation and overturn notions of audience accessibility by using a language whose meaning shifts depending on how it was engaged with (and by whom).

As a piece of immersive theatre, I missed opportunities to actually walk the space. Over all too quickly, I half expected to be led on the journey we had just created. Instead, afterwards, I wandered the upper level, checking door signs and trying to decipher the journey that was sometimes vividly and sometimes abruptly illustrated. Looking more closely however, A House Repeated does more than simply reconstruct a game into another medium because in doing so, it becomes an embodiment of game, site, and audience agency. All three aspects are released from the video, repackaged within a new medium and a repeated set of boundaries. This allows audiences to experience the concepts of the game and of exploring site in an entirely new way, whilst altering an experience of theatre by conceiving it through the framework of a video game.

Descriptions of rooms rearranging, of promenading into existing spaces and discovering objects, intertwines brick and mortar with fantastical architecture and biography of space. It taps into the extensive rebuilding programme quintessential of BAC’s identity as a centre for play and creativity. After a history of campaigning to save the building and the recent setback of the fire in March 2015, BAC is fully engaged in its rebuild based on a long term research programme that works on their creative concept of Scratch. Rewriting or rebuilding the whole or sections of the centre as part of the creative process for performance work, ushering a new era of collaboration between site and show. Drawing longer term solutions from these interpretations places this architectural concept of ‘Playgrounding’ as creative catalyst for both show and site. A House Repeated parallels this innovative process by deconstructing and reinventing its theme and site together with every prompt, decision, and description in the piece. It takes apart and rebuilds Battersea Arts Centre, adhering to the same concepts of creative play that underpin artistic director David Jubb’s and architect Steve Tompkins’s creative architectural concept of Playgrounding. Stripped bare of production and technology this piece is complex and challenging through its minimalism, firmly establishing itself within BAC’s identity and pushing the boundaries of immersive theatre in alternative directions.