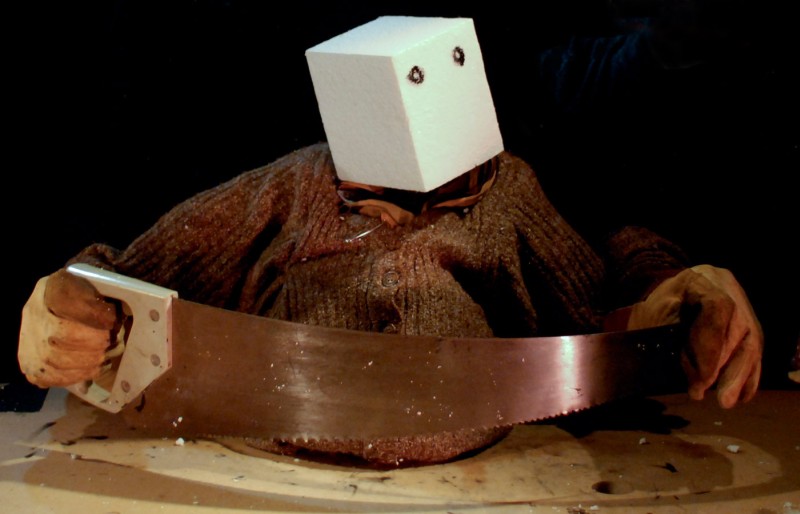 Skipton Puppet Festival is a biannual affair run by the resourceful Lempen Puppet Company.  Resourceful because over the three days the festival runs they manage to give the audience the full range of puppetry (for young and old, indoors and outdoors, national and international) in a town which isn’t blessed with obvious venues.

The street programme featured S.A. Marionetas from Portugal showing us a story about Don Roberto – the Portuguese version of Mr. Punch. I say story but basically it’s an excuse for Don Roberto to whack seven shades of hell out of a skeleton, a crocodile, and a bearded figure whose symbolism eluded me. He ended up marrying a fair damsel. The courtship involved a fair bit of mutual whacking.

The set was your basic Mr. Punch-style booth (covered this time with a floral pattern rather than deckchair stripes) on which perched a crudely painted (or very well-toured) castle with a turret. This gave Don Roberto and his foes two levels to appear on which they did with speed and in places and combinations which constantly took you by surprise. The puppeteer appeared occasionally to demand applause for a particular scene – sometimes his demands were met but often the crowd’s reactions sent him back to carry on with the story and earn the reaction he demanded.

What can I say?  It was violent, simple and very funny.

Theatre Tof are yet another excellent Belgian export. Their show Bistouri is a classic and to this you can add Dans l’Atelier, the show they presented at Skipton.

The set is a messy worktable covered in tools, bits of crud and cardboard boxes. A figure made of a headless coat and gloves appears and sets about trying to rebuild its body. A cardboard box reveals a small polystyrene block which is impaled on a knife and stuck in the neck-hole of the coat. The hands scrabble around on the table and find a brush and pot of paint so that eyes can be self-administered. The two puppeteers scrupulously follow the logic of each development in the creation of the body.

Once the head is in place it needs to be sculpted into a more realistic shape. Like trying to cut your own hair in the mirror this is easier said than done, especially with the use of a big saw.  The eyes get accidentally trimmed off.  A smaller head is fashioned with the use of a fork stuck into the shaving with the eyes painted on it.  The larger block is then placed in a vice so the coat can carry on in a more “artistic” manner.

With the appearance of a pair of trousers a whole body is assembled and in the process the figure changes from being passive in the hands of his animators to becoming a tyrant with bullying tendencies. This process is emphasised when he discovers the end of a small brush and fixes it under his nose to resemble Hitler. Eventually the puppeteers have to “kill” him. As he’s stuffed into a box he doesn’t go without a fight  but a cordless drill finishes him off.

Over the 20 minutes the show lasts the company push the ideas to the limit. It’s extremely funny, shocking, and a brilliant demonstration of visual story-telling.