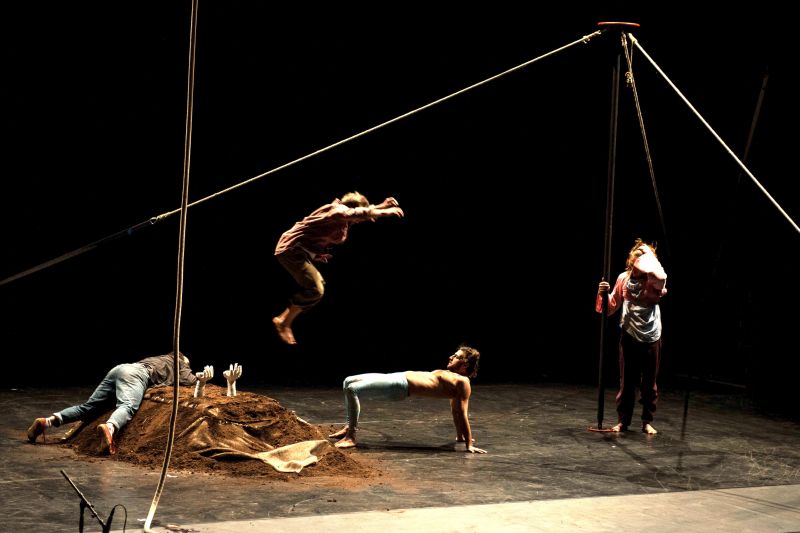 The great joy of the Mime Festival is that whilst a stripped back, poetic meditation on the human condition such as Yoann Bourgeois’s He Who Falls is playing in one venue, across town in another space a dense and anarchic circus show such as Svalbard’s All Genius All Idiot is also playing. And what a contrast these two shows are.

Founded by four graduates of Stockholm’s University of Dance and Circus, Svalbard might, in theatre admin-speak, be called cross-disciplinary, but this wouldn’t come close to capturing the raucous and irreverent spirit of this strangely beguiling band. In fact, a band is probably the closest description of what they are. Svalbard have that thrusting vigour and dangerous sexuality of all the best rock bands; they have the sense of a band of outcasts roaming the hills before descending on unsuspecting villages to outrage the locals; and, more prosaically, each scenario, each ‘act’ is driven along by the songs they sing and the music they make.

This music-making is led by the sinuous and strutting Ben Smith, his malleable voice conjuring different worlds for his fellow performers. Described in the past as ‘a crappy farmer with some skills’, here he might be an echo of the pagan past of his native British countryside or his adopted home of Sweden. Wearing antlers, dressed in fur and fishnets, and rutting like a stag he is the image of the shaman – part in this world and part in the otherworld.

In fact all four performers possess this shamanic quality – the compact and springy Santiago Riuz Albalate, dressed more conservatively than the others, is the band’s trickster – a laughing and unstable figure perched atop the Chinese pole. In contrast, John Simon Wiborn is more earthy and grounded – aggressively (and often literally) pushing the others of the band on into each new moment. And then there is the elfin Tom Brand, who, even whilst he whips around the corde lisse manages to maintain a delicate air.

All Genius All Idiot is circus as a liminal act, on the edge between civilisation and the wilds, between circus and music, between animal and human, between the genders, between and the real and otherworldly. It is a hedonistic celebration of the Bacchanalian spirit. Originally commissioned for the 2015 Glastonbury festival, it embraces Glastonbury’s blend of music and counter-culture, and the result is something akin to a prog-folk-rock album – familiar melodies and sounds reeling and whirring in unfamiliar ways. At first it feels daunting and aggressive, but by the end it kind of makes sense, if not in intellectual sense then on an instinctual level.