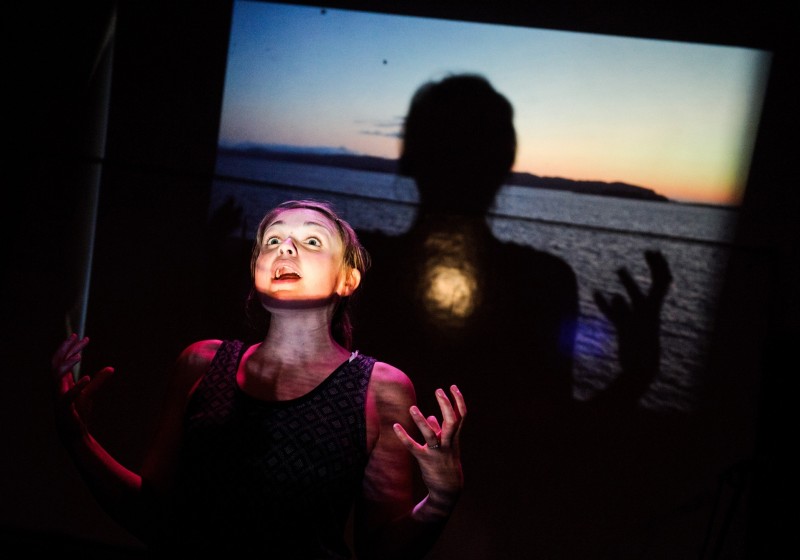 I arrive a minute late, and enter the space as Veronica Hare is already powering up in this spoken word, music, and slide show performance, but she finds time to help me get settled and find a seat even while introducing the character of J – a young high school physics teacher struggling to get by in the Midlands, but with stars in her eyes. Accompanied by Jim Harbourne on a loop pedal mixing his electric guitar riffs, percussion, and vocals, this performance is at first carried by her passionate delivery of the world of J, her mixed life of hardship, hopes, and dreams.

The shows tells the tale of J’s decision to chase a message from a dating app to the far coast of Scotland, using slides and fragments of staging to recreate scenes and conversations of the meetings between J and the man she goes to see, who is inspired by a man called Blair that the performers met in a pub on the far coast of Scotland. What is gradually drawn out is the sense both of the massive differences between these two people – their personalities, their environments, their attitudes, their engagements with life, nature and technology – and the understanding that these contrasts don’t appear all that different after all when viewed from as an epic – from the perspective of the distant stars.

This wonderful, inspiring work manages to work together physics with poetry, good musicianship with impressive spoken word, the immensity of the universe with annoying local planning in tiny rural towns. Created to be staged in rural venues, pubs, and similar unsupported spaces, continuing the company’s experiments with their touring model in previous show Beulah, this piece could bring a tear to the eye of the most hardened local drinker.