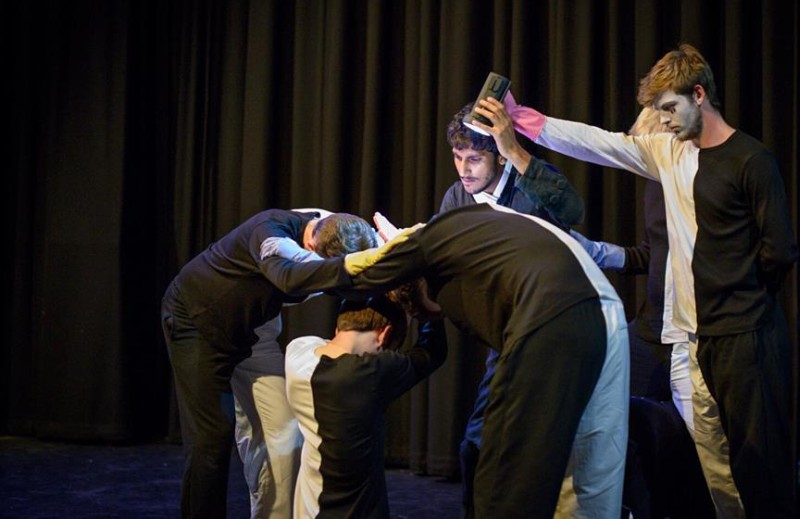 This production of the classic tale of a magician and a demon begins with five young men of highly stylised appearance – theatrical costumes of black and white, faces painted in bold two-tone, rubber gloves of pastel pinks and blues – laying out the scenario with text and physical theatre performed with energy and pace. In their hands are handheld LED torches. Throughout the performance this ensemble/chorus use the torches, their bodies, voices, and gloves as incidental characters, props, and furniture to support the unfolding story of the three protagonists. This is a cast of post-A-level teenagers who work well to deliver and dust off an old classic.

When Mephistopheles appears, played by Steffan Evans, his costume sets up an immediate strong contrast and while he may only be Satan’s representative, in his red ecclesiastical outfit and goatee, his assured, powerful, and highly controlled performance feels like an homage to the fallen angel. Faust, played by Akshay Khanna, is a contrast in blue robes. Playing an old man with a high energy delivery is a challenge for the young actor and it is a relief when he regains his youth. The play really takes off though with the appearance of the only female performer, Taylor Hanson as Gretchen, and the romance that follows plays a prominent part in this adaptation by one of the staff at the school.

This production benefits from the limitations that the cast and creatives have imposed upon themselves. By using only words, bodies, rubber gloves, musical instruments, and torches, they inventively create the world of the play and it is this combined with the impressive performances of the three leads that carries the show.