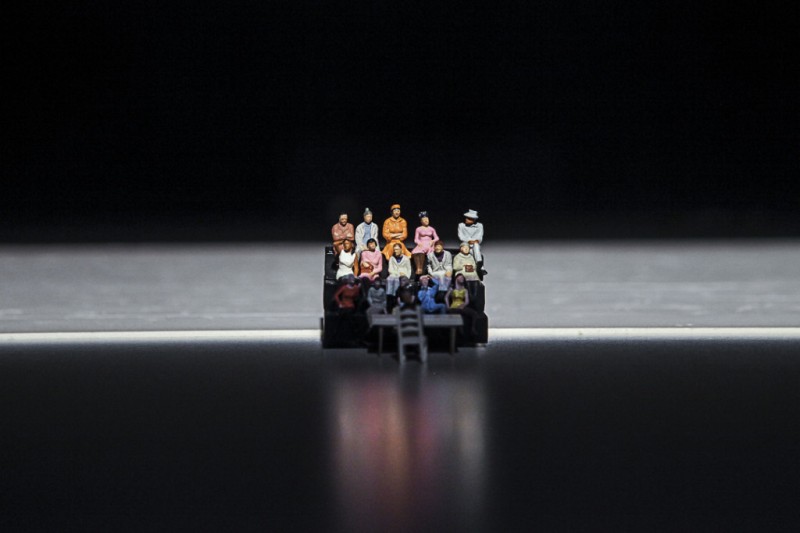 An interview with David Espinosa, creator and performer of  Mi Gran Obra

Imagine for a moment that you have an unlimited budget and bounteous resources. The largest theatre in the world. A cast of hundreds. Marching bands. Animals. Helicopters. You could make the biggest, the best show ever seen!

Spanish artist and theatre-maker David Espinosa has, since his arrival on the Barcelona scene in 2001, eschewed spectacle and the grandiose, focusing instead on work that plays with the boundary where new dance, physical theatre and conceptual art intercept. Somewhere along the way he became interested in exploring how the animated object might represent and replace the performing body – a puppetry of sorts. And this has led him to the idea that he could perhaps create the greatest show on earth – on a tabletop with figurines and toy animals. Thus, in 2012, was born Mi Gran Obra (My Great Work), which comes to the London International Mime Festival 2016, presented in collaboration with Tate Modern.

It is one of a series of works that David Espinosa has made which explore the notion of megalomania. When he first created the show, he worked with a sound and lighting operator. Now he does everything: towers over the tiny people and animals, pulling them hither and thither; zooms in with the toy helicopters; turns the lights on and off. He is the god of this miniature world, a Zeus lording it over his plastic Olympus. This is the grandiose theatre he never wanted to be part of, ironically embraced with gusto.

Although Mi Gran Obra seems a long way from his starting point as a dance and physical theatre performer, Espinosa insists that it is on a clear continuum. ‘I think choreographically,’ he says, ‘my work is about the relationship between space and time. And sound…’ In word-free work, he says, ‘music is half the performance’ – the sound becomes crucial to the dramaturgy of the piece, giving it ‘its timing, its meaning’. He works with composer and sound artist Santos Martinez, a renowned film score composer and winner of the coveted Gaudi prize, who has no interest in the film industry, preferring the place where performance and experimental music collide. The two artists devise together – music making and physical action intrinsically linked. Deconstructing and reconstructing ‘the masterpieces of music’ was a key element of Mi Gran Obra: ‘Beethoven, Deep Purple, Tibetan monks… we make Beethoven’s Fifth better than Beethoven!’ Espinosa also regularly collaborates with a number of architects. At the beginning of the process of of making Mi Gran Obra, he had an intention of making an elaborate model theatre, but the architects talked themselves out of the work, insisting that it would all work so much better with an empty space. Also key to the process is company manager cum creative producer Marta Oliveira, whose mantra is ‘Don’t forget the audience!”

David Espinosa comes from a regular working-class Spanish family who have no connections to the art world. This, he feels, is important as it has given him a freedom to move in whatever direction he wishes, free from an overbearing middle-class view of what art or culture might be. ‘For most of my family, the first time they went to the theatre was to see me!’ he says. He was an only child, used to playing on his own, creating imaginary worlds – something he still does. Game-playing is core to his artistic practice. A key area of investigation of all the work he has made over the last decade or so is: how can I continue, as an adult, to play with the full immersion and passion of a child. Did he have toy soldiers or other tiny plastic models as a child? No, he says, he was never allowed them for some reason, no matter how often he asked – which is perhaps why he is now getting so much pleasure from playing with them in Mi Gran Obra: ‘Now I choose what I can spend my money on so I can buy as many as I want!’

On leaving school, he went (aged 18) to study theatre in Valencia – a pretty traditional text-based course. ‘Lope de Vega…’ he says, with a small sigh. He wasn’t sure at the time why he choose this path – he just wanted ‘to do something different’ – but with hindsight, he feels it stemmed from ‘a desire to carry on playing’. Contemporary dance and physical theatre classes and courses brought him closer to something he wanted to do: to use his body to create art and tell stories. Like everyone else working in physical performance in the 1990s, he admired Pina Bausch greatly. After a three-month spell in Brussels, he found himself in Barcelona as a dancer – and it is here that he has laid down his hat and made a home, with partner in life and art, Afrika Navarro (also a professional dancer, turned eagle-eyed outside eye on the work) and their children. ‘We have very different ideas, ‘ he says of Afrika. ‘She likes things to be beautiful, I like things trashy.’ So it is not so much that they are co-creating work: he makes the work, and she takes the role of dramaturg – observing, questioning, challenging. ‘We have a good connection because we fight,’ he says with complete honesty. Somehow between them they ‘arrive in a balanced place’.

The children have had a direct influence on his work too: watching them play has inspired him, but more than that he has appropriated their toys into his work –  not only in Mi Gran Obra but also in the subsequent piece Much Ado About Nothing (2014), in which all of the works of Shakespeare are performed in one mad burst using toys, puppets, models, ornaments. ‘Everything I could find in the house…’ This progresses a way of working that has been a recurring aspect of his practice: to take whatever he finds in his immediate environment and incorporate that into his work. An earlier solo piece saw him involving his computer in the studio play, turning himself into the living avatar of a football manager video game: ‘a chance to make real all my fantasies!’ he says. This was before he decided to replace the living body with object substitutes – or, as in the case of another work, La Triste Figura (which premiered autumn 2015), replacing the performer with the audience member who has to discover the work through a journey armed with torch and opera glasses.

The past fifteen years of Espinosa’s work has a seen a steady progression away from contemporary dance into work that is informed by fine arts practice – especially sculpture. It is no coincidence that Mi Gran Obra is being presented at Tate Modern alongside the big Alexander Calder retrospective currently showing.  Joseph Seelig, co-director of the London International Mime Festival, and Marko Daniel of Tate Modern saw Mi Gran Obra at Birmingham’s BE Festival 2014, and hatched a plan to present the work in tandem with the Calder exhibition. Espinosa, like Calder before him, describes his work as ‘performing sculpture’. He continues on that trajectory with the new work that he is currently planning, which will be threefold – an opera, a dance performance, and a 3D film – using big toys and other large-scale models. This will evolve over the coming two years.

The work in development will be the third stage of the investigation into megalomania, alongside Mi Gran Obra and the Quixote-inspired La Triste Figura, and will progress the key principles and obsessions that drive the artist. Adult toys. The power of play. A love of the homemade and the handmade.

In the wake of the financial crisis that has decimated Spain in recent years, David Espinosa considers his choice of a small-scale and lo-tech ethos to be a political one. He also finds it impossible to separate the issues of scale and the dramaturgy of a piece of theatre. ‘How much money has been spent, how much support – these things inform the work.’ Whilst viewing these big overblown productions, he has found himself asking ‘what would I do if I had these conditions?’ And so, the creation of Mi Gran Obra, to use ‘ the little scale to do a big performance.’

The ultimate irony of Mi Gran Obra is that, tiny though it is, performed on a small table to audiences of 20 or so people at a time, it has been an enormous success and has toured the world, and has thus been seen by thousands and thousands of people. Which would delight any megalomaniac, really!

Dorothy Max Prior is editor of Total Theatre Magazine, online at www.totaltheatre.org.uk, and a judge of the Total Theatre Awards, held annually at the Edinburgh Festival Fringe.