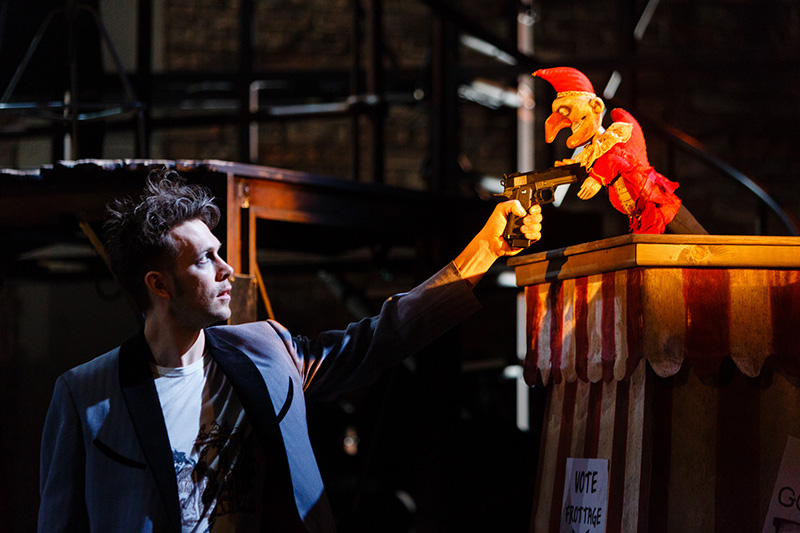 Kneehigh’s reputation has been built over 30 years, working with a changing ensemble to make acclaimed multidisciplinary popular theatre. Coming towards the end of a four month tour, Dead Dog in a Suitcase (and other love songs), written by Carl Grose and directed by Mike Shepherd, packs Shoreditch Town Hall with a cornucopia of characters – from puppets serving cocktails from a cement mixer to an oversized ghostly dog carcass looming, in an eruption of newspapers and glitter, over the audience. A cast of 13 stonking musicians, who appear as multiple characters on a dark and misty set with revolving platforms and a sneaky slide, create a raucously dark musical based on, but by no means constricted by, the structures and features of John Gay’s 18th century classic, The Beggar’s Opera.

Dead Dog also takes much from its Brechtian forbear, The Threepenny Opera, which made John Gay’s legendary ‘Jack the Lad’ Macheath (from whom the phrase originates) into a more sinister, murderous, and violent criminal in 1928, responding to the rise of Nazism in Germany. It is this Macheath who now dabbles in contemporary criminal activity with a resounding message that nothing changes.

Coined as the Beggar’s Opera of our times, a contemporary music score composed by Charles Hazlewood certainly brings the opera crashing into our own society. Toe-tapping to a rocky, punchy, and poignant variety of songs, the audience was almost as rambunctious as the cast. The full house burst with laughter and commentary at this satisfyingly dark and unfestive frolic. Instruments galore, this piece was a walking talking dancing orchestra of gags strung together into a full length narrative. Audiences could sit back and enjoy each montage, crack, or song, and get their teeth into the ever changing journey of the dog in the suitcase as it is passed obliviously from pillar to post.

With a questioning morality at its core, and a distrust of bourgeois social structure that made it so appealing a story for Brecht, here there are no heroes or happy-ever-afters. The dead dog’s comic-tragic journey is surrounded by the wheelings, dealings, and love triangles of Polly Peachum, Lucy Lockit, and Macheath, whose epic decisions exert such tremendous consequences on each other’s lives.  The values of both the cast of characters and us as audience are thrown into relief by a punctuating commentary of exquisite Punch and Judy glove puppetry (Sarah Wright). Choice and consequence run steadily through the show, engaging viewers by continually breaking the fourth wall, exposing the mechanics of the set, actors playing multiple characters and revealing possible decisions.

The piece seamlessly navigates performers, puppets, instruments, and characters into the blocking of the narrative, making it as a whole fast-moving and full of content. Navigating a myriad of busy scenes sometimes overshadows opportunities to respond sensitively to the audience. Gags were never missed but the breathless pace rushed us ever onward. Occasional clunky transitions into song and an inconsistent use of microphone detract from what is a musical and theatrical showstopper.