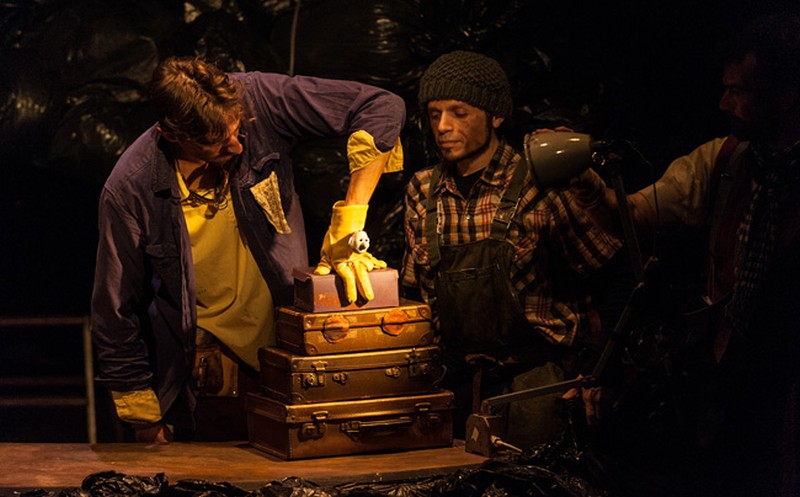 In Theatre-Rites’s show (for children 5+, and everyone older), made last year and now touring the UK, four “excavators” – steampunky characters in a particular and powerfully imagined world – explore an impressive mountain of black bin bags. As they work through their conflicts and alliances, they uncover various objects that – animated as puppets – bring their own stories to the fore.

Director and leader of Theatre-Rites, Sue Buckmaster, has spoken of the piece’s “object-driven” dramaturgy, and this runs through Rubbish with an absolute clarity. It’s there, of course, in the puppetry, which is brilliant – every beat is clear, precise and playful, alive – and it works outwards through the gentle clownish presence and sharp interaction of the excavators, and through to the almost-preposterous heap of rubbish that forms the set, inviting climbing, delving, and exploration.

This attention to detail allows the puppetry, in particular, to reach for some big ideas while being rooted in the entertaining moment. There is, for example, a little teapot duck, who is rinsed of the dark gunk he comes out of his black bag covered in. He can, if we want him to, stand up for every oil-slicked seabird we’ve seen; he’s also a warm and witty presence who waddles off happily.

In this way, Rubbish is never didactic; it has no need to be.  Even a gleeful audience-participation recycling-sorting sequence avoids it through the strength of the puppet character at its heart. And a lot of what comes out of the rubbish bags is not garbage, per se, but antiquated objects of faded beauty, and they send the piece into richer territory: there are questions quietly asked about aging, about loss, about a much wider sense of what is discarded in our culture.

The small frustrations of the piece are related to the strength of the object-driven dramaturgy – the puppet-objects (and arguably the excavator characters) are so much themselves that there is, for me, not enough consequence to, and between, their stories: I craved a little more narrative drive. The one moment that really didn’t come off was when a grand lamp, contrived of excavated rubbish, was given a little too much assistance by a piece of theatre technology that felt as though it arrived from outside its world. There’s an odd sonic gear-change (from Jessica Dannheisser’s potent soundtrack) at the very end of the piece.

But the rewards of this logic are very great. The story of a single glove in search of its partner becomes a miniature epic, a tour de force of puppetry and ensemble theatre – the performances throughout the piece are impeccable – as the rest of the company build the worlds of its journey swirling around it. It opens your heart like, well, a mysterious bag of possibilities. The show may not be perfect (and a show called Rubbish probably doesn’t aspire to that), but – like the surprising treasures in its bin bags – it is precious, and profound, and playfully inspiring.