Tim Crouch & Andy Smith: what happens to the hope at the end of the evening 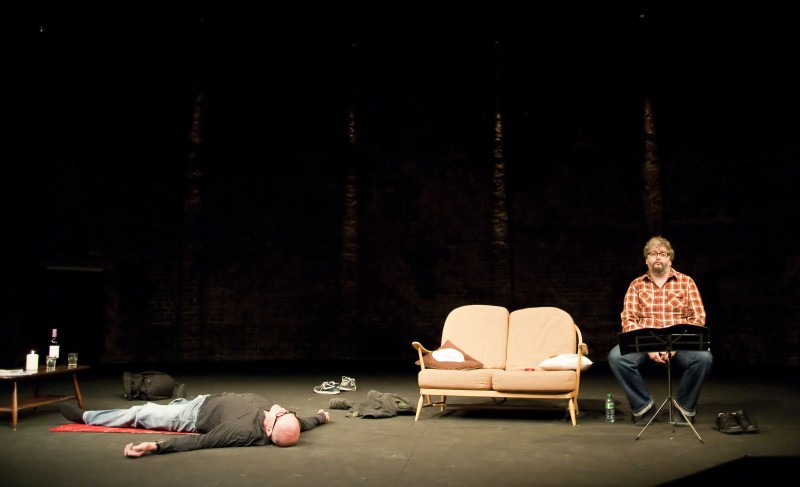 Tim Crouch’s plays effortlessly combine compelling character drama with an interrogation of political and theatrical ideas that is exhilarating. In this performance, a collaboration and two hander with Andy Smith, that he professes in the programme has been on his wish list since writing his play An Oak Tree (2006), the subject is connection or the lack of it. It’s an idea that’s inherently dramatic as well as, brilliantly, about theatre’s own essentials.

Tim and Andy play two old friends whose life has drifted apart: Andy is settled, expecting his second baby, finishing a PhD (which sets up a frame for some of the performance theories drawn into his monologue). Tim is the one left behind, trashing his marriage with a dead end affair, still living in the old place, keeping up the old habits – smoking, petty crime, inflammatory anti-fascist marches – and furious about it all. He is a man so enraged with the world that even a ‘Baby on Board’ sticker reads like a passive-aggressive attack. Tim is playing a character, he is puffed up on stage, every nerve over-stretched and ready to blow. Andy, seated, reading from a script on a simple metal music stand, is playing himself, or a version of himself. The blurring of performance and reality, conversely, draws us more deeply into the fiction: we are in on the joke, the house lights are up throughout, and Andy often speaks directly to us, the complex ideas being discussed feel offered with an open hand. ‘Join us,’ they seem to say, ‘as we try to work this out.’

What both dramatic situation and theoretical discourse (which arrives through a series of simple quotations and comments peppering Andy’s account of the evening) explore is our need to connect against all the odds of the modern world. These are, essentially, two monologues, albeit one full of appeal and demand for response, and both punctuated by moments of electric physical connection on stage – a perfectly placed look, a hug, a moment of awkward intimacy. The form perfectly reflects the shared longing to find one another’s friendship and the impossibility of achieving this. In fact, here any shared understanding can only be reached in the other’s absence: the reality of dealing with the other person repeatedly scuppers attempts to actually find one another in the moment.

Yet, as we wade through the evening from hell with these two estranged friends, their disputes and increasingly hilarious clashes of perspective in Crouch’s fizzing exchanges, something happens, something changes. This is theatre, of course it does! Theory illuminates dramatic situation and our own place in it: they may not be able to reach one another, but both of them touch us. The rage and fear of Tim’s character is, in many ways, more identifiable than Andy’s cool detachment, an inevitable response to an alienating, alienated world which perhaps, as the Mayans suggest (and Andy explains) actually did end in 2012, the process of dissolution beginning invisibly, interminably. In such a world, the theatre as a place to briefly come together, discarding those anxieties like un-needed shoes at the door, has never felt more beautifully idealistic.