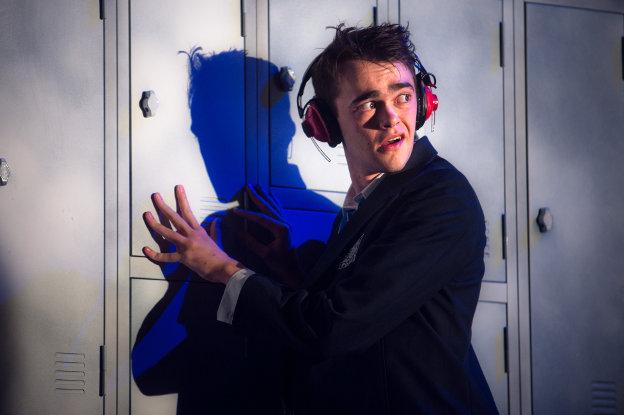 Presented as part of the Made in Scotland programme, The Static is the third piece by ThickSkin in what could loosely be called a trilogy, the first two pieces being White Noise and Boy Magnet. What these three works have in common is an interest in investigating natural forces like electricity or magnetism, and in using them as the basis for an exploration of the dangerous enterprise of becoming an adult.

The Static tells the story of a 15 year-old boy called Sparky who is written off at school as a disruptive influence and a lost cause until the day he is prescribed Ritalin for attention deficit hyperactivity disorder (ADHD). Sparky apparently becomes addicted to this drug, and when he falls in love with a strange girl called Siouxsie his thoughts become telekinetic, giving him superpowers over objects, the ability to make things fly.

This is thus a metaphor for the moment in life when a person is no longer a child but not yet an adult, sometimes playing with toys, at other times trying to act like a grown-up, struggling to understand a huge number of new rules and patterns. A drug is offered to mitigate the anxiety, the thoughts become clearer, the body becomes stronger, but it’s not enough to deal with the heart… Love appears as an infinite and uncontrollable source of power and it’s exactly because it’s so uncontrollable that life seems brighter and darker at the same time – secrets and desires are unveiled to expose the youth to a painful world.

Written by Davey Anderson, and directed and choreographed by Neil Bettles,The Static creates a magnetic atmosphere with lots of multimedia effects. A very simple and functional scenography, composed basically of schoolroom steel cabinets and a table, is perfect to create different stage spaces and moods. Brian Vernel as the leading actor plays his role with veracity and a charming kind of abandonment. The other actors – Samantha Foley, Pauline Lockhart and Nick Rhys – are also secure and strong in their constructions of different characters. The Static is a delicate group work that, despite the kitsch choreography, brings us a playful way to think about the difficult task of becoming an adult.