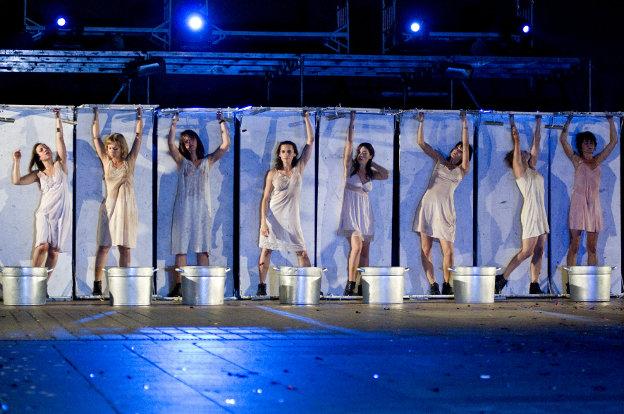 The Blind is an outdoor theatre show created by the Polish company KTO Theatre and inspired by the Portuguese writer José Saramago’s novelBlindness. I’d find it impossible to review the show without making some consideration of how Saramago’s work has influenced a whole generation of new creators in performance arts and cinema. In South America, where I come from, his books have been bestsellers for the last two decades. Saramago’s poetic writing, his atheism and his political concerns run strongly through all his books, and manifest both in his singular perception of the world and in the way he writes on issues of power, humiliation and loneliness in the relations between people.

When Saramago’s idiosyncratic universe was put together with that of the also idiosyncratic and politically concerned group KTO Theatre, a huge and violent wave of ideas was created in the form of this masterpiece, The Blind, a word-free piece of spectacular outdoor theatre that combines the physicality of its performers with music and all sorts of extraordinary visual effects.

Saramago’s book Blindness, and thus the narrative of KTO’s show, tells the story of a group of people that suddenly, and without any explanation, become blind and are locked in a kind of asylum. As time goes by, everybody else in the country also becomes blind. This small isolated group is lead by one person who didn’t develop the strange blindness, and together they start reproducing all the relational problems of a ‘normal’ society.

The monumental staging of this story – which includes a great scaffolding structure and a massive array of hospital beds that wheel and race and clatter across the space, along with pyrotechnic effects and a forceful soundtrack  – succeeds admirably, and deals brilliantly with the epic proportions of Saramago’s story, appropriately presented in this big outdoor courtyard rather than a confined theatre space. The way blindness is performed by the actors is also something to be commended. One of the most important elements in this play is the sound: music, and the sounds of all the objects in the space, lead us into this world of darkness.

The Blind captures all the deep impressions carved in Saramago’s book and brings the audience into its parallel universe of fear and blindness. A superb interpretation of this fantastic novel.