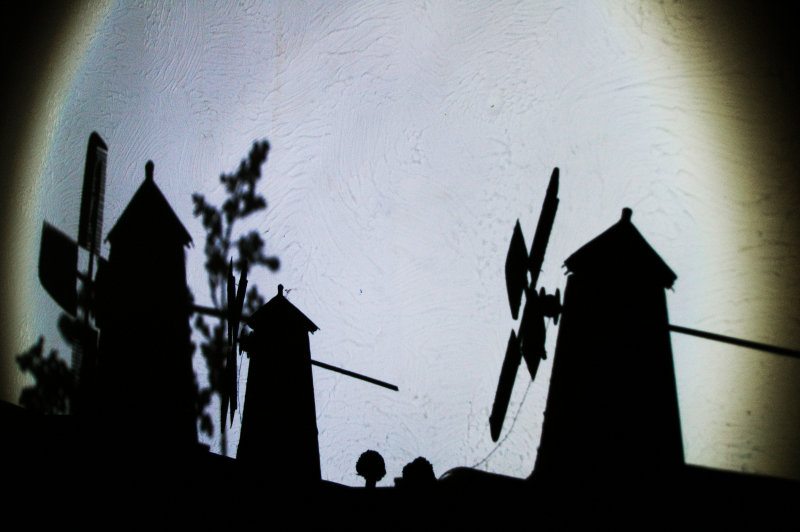 Frankland, Cooper and Otero’s Don Quijote offers an exhilarating and thought provoking adaptation of the seminal 17th Century novel. Audiences at Reading’s SITELINES festival were invited to pull up a cushion on the floor of an office in the town centre to watch the show. Sitting amidst six installation/performance spaces arranged around the office, we were treated to a 360° spectacle. This included Skype calls, thunderous flamenco dancing, a handsaw, paper snowstorms, and a very earnest monkey who played the drums and did his level best to DJ under difficult circumstances.

The performance begins with a classical, if quirky, portrayal of the story of Don Quijote, the romantic adventurer. It progresses towards an abstract and meta-theatrical exploration of the underlying themes and structure of the novel. The artists cover a dizzying amount of ground to touch on themes of nationalism, orthodoxy, idealism, and only small philosophical points such as the nature of reality, and its relationship to fiction and ideology. But these themes and questions are not necessarily articulated verbally. They are embedded within the fabric of the performance and its use of space, revelation and dialogue with the audience, who help shape the performance throughout.

The performance ebbs and flows unpredictably. There is a sense that it will not be contained either by the edges of the performance space, the stimulus narrative, or even the expectations of its artists. A relaxed atmosphere is mixed with a raw energy. The audience alternate between feeling they are ‘hanging out with the performers’, or witnessing anarchic, or highly controlled expression. Beautiful shadow displays across the walls and the ceilings give way to chaotic collective scramblings to assemble costume and props. Intimate memories shared slowly precede darting torchlight, which picks up flickers of dancing to the sound of hectic drumbeats. Meanwhile, one audience member is chosen to develop an entirely different narrative in another space. This other ‘performance’ for the most part takes place independently, simultaneously.

The performance is enchanting and farcical, but is also driven by the political and philosophical passion of the novel. This imbues its disparate elements with something intoxicating. Having turned the black box theatre space inside out in its design, the performance also celebrates those who have lived their lives ‘outside the box’. It questions state deception, and the repression of creativity. A series of images eventually focus uncompromisingly on moments from our social history. Images of Iraq and Afghanistan appear momentarily, before an image of the late peace campaigner Brian Haw. We are told to the screech of an electric guitar that ‘society shits on dreamers’. The effect is secured with the rhythm of the drums and oration, which keeps our attitude at this moment steady and sombre.

Dialogue doesn’t stop with the end of the performance. Still covered in the paper snowstorm, bearing Cervantes Saavedra’s text, we want to keep talking about it, so everyone piles into the pub next door.