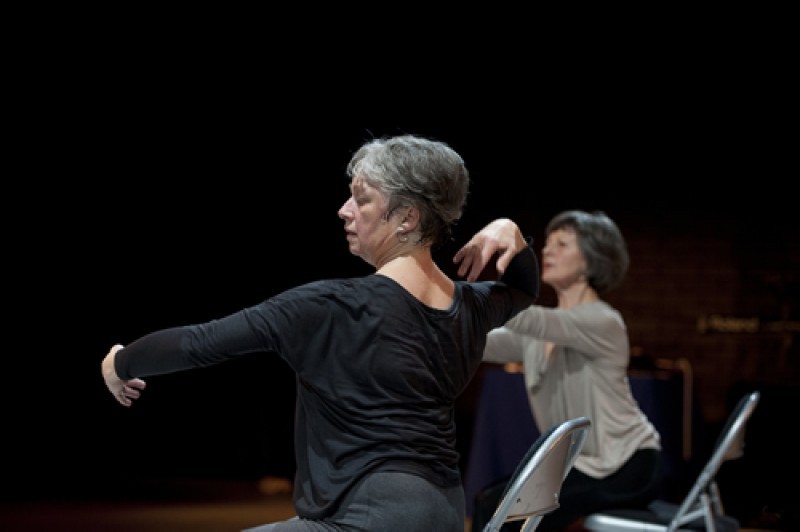 Presenting between four and six pieces every night for the three weeks of the GOlive Dance and Performance Festival, Donald Hutera (dance critic for The Times) does not do things by halves. Personally introducing each artist and seating each audience member in the sixty-capacity space, Hutera’s belief in and support for his artists couldn’t help but rub off on his audience. This receptive environment made space for risk-taking, work-in-progress showings, discussions, and an overall sense of organised mayhem that created a big buzz around this festival. Audience members had to be prepared for a fast-paced night that could take them from contemplating their existence (Marguerite Galizia’s Where Am I?) to considering how many peas they could eat with a cocktail stick (Figs in Wigs’ Dance Peas).

In the triple bill on Thursday 19 September, Anna Williams contemplated the worries and woes of women whilst listening to the radio in her work-in-progress piece Woman’s Hour. Williams illustrated the thoughts of ‘every woman’, using Woman’s Hour as a sound-score for an animated and charismatic parade danced alongside a woman from the audience invited to sit on stage and knit (which happened, on the 19th, to be me). When handed a microphone and asked to read a written text, I was moved by the disarming honesty of the memories of ‘my Granny’. Dancing to my voice as I spoke her words, Williams provided a visual narrative which personified the thoughts of the knitter. Williams left a poignant and lasting impression as she spoke and danced: ‘I work. I work, I worry, I cry.’

In Sorbet du Soir, Flora Wellesley Wesley played with voice as she squealed and pronounced her way through a choreography drawn from every-day gestures such as chewing and waking up. Wesley’s sense of irony and the finesse in her execution of movement imbued an amusing piece with edge and a sense of knowing.

In Cast Aside – Camille Claudel the story of an artist hospitalised for schizophrenia tinged the night with sadness. Marie-Louise Flexen took advantage of the close environment to draw the viewers’ attention towards a lit window; at first a beacon for inspiration, it quickly transformed into a symbol of imprisonment. Flexen’s inwardly focused ritual – a litany of twisting and crouching beneath looming shadows – expressed the frustration and angst of Claudel through a vocabulary drawn from the artist’s sculptures.

The works presented on Saturday 21 September moved from reflections on women to reflections on male sexuality. In Layers: (H) eroticism Of Beauty, Kali Chandrasegaram towered over his audience in a display of male physicality that juxtaposed with the overtly sexual and feminine nature of his costume. The key to this piece lay in the Indian choreography and the tension between its delicate nuances and the heavy, sweaty, muscular body executing them, building, clumsily, a strange sense of eroticism.

The Sacred, based on a series of mechanical line drawings of penises, sought to close a widening gap between the sexes. Hutera here bought together artist Lilia Pegado and dancers Avatâra Ayuso and Sarah Kent, who, in response to Pegado’s drawings, developed two overlapping solos through structured movement and vocal improvisation. Typical of the ‘fly by the seat of your pants’ nature of the festival, a film of Pegado’s drawings by Bruno De Lara and the two solos were put together for the first time that day. Although somewhat disjointed in its presentation, Kent’s madness as she reminisced over her sexual endeavours and Ayuso’s tentative manoeuvres around the periphery of the space questioned the relationship between the sexes in a show of female solidarity that sat within the context of several experimental collaborations undertaken throughout the festival.

In Late Work, the opening performance for Wednesday 25 September, Jennifer Jackson and Susie Crow (Big Ballets) continued the theme of collaboration between artists. Building on improvisations between musicians Malcolm Atkins and Andrew Melvin, Crow and Jackson recalled their traditional ballet training and rebelled against its structures. Most memorable of several sections was an almost frantic choreography to a sound-score of conflicting counts and the indicative use of ‘contrapposto’ and epaulement within the movement.

Immigrants and animals’ William William, a rock-and-roll-themed duet, used repetition almost but not quite to the point of monotony. Two female performers made up with drawn-on moustaches moved precisely through a handful of short, minimal movement phrases that gradually built towards a topless, head-banging crescendo. This well-polished piece used restraint and sobriety to question gender with a cool detachment.

In ICE BEAR, on Saturday 28 September, Fred Gehrig ironically compared his experiences with Merce Cunningham to veils that cover the face as he questioned modes of expression. The piece began with a fractious rant on film then moved on to a live dance evoking Cunningham-styled choreography, but with the body partially covered by a headpiece reaching down to black gloves. Gehrig ended the piece in a fight with a projected image of a bear, which was then transferred to a man in a white lab coat who worked the lights and projections onstage. Gehrig bravely created a grotesque character in a disjointed piece ending with an anticlimax. His sense of humour and presence as a performer shone, as did his tenacity in staging the reactionary work.

Marguerite Galizia’s Where am I?, questioning where he is in his own consciousness if his brain and body are separated, performer Dan Watson jumped back and forth between postures, never realising the answer to his questions, whilst a laptop documented his location from a bird’s eye view. The aesthetics of the high-tech tracking system on screen, juxtaposed with the cerebral turmoil expressed on stage, could be utilised further to maximise the tensions between the subconscious and the physical being.

Finally, Figs in Wigs’ Dance Peas was a deadly serious pea-eating competition between five girls dressed in sequins and sports trainers. The piece became more interesting as the audience discovered that they were attempting to break a world record. A voiceover briefly discussed this process and its relocation to gallery or theatre spaces, transforming it into a piece of durational live art. Unfortunately, the world record was not broken that night. However, perhaps a few boundaries were by its inclusion in the festival. The anything goes attitude of GOlive, although risky, was far from blasé. The hotchpotch of pieces, featuring work-in-progresses, new collaborations, well-rehearsed shows and discussions revealed an honesty and integrity in the artists. The fun and games, combined with heavy themes such as gender and sexuality, made the billing precocious rather than pretentious, and the sheer volume of performances in the festival could have spelled disaster, but instead struck gold.