Dorothy Max Prior reflects on the recent works of Forced Entertainment

The Basement arts centre in Brighton on a school night. A young and eager audience, and a stage set simply – just a square of wooden decking and a festoon of lights. Enter two performers, one male and one female, playing themselves (or versions of).

‘In the future…’ says one, and the game begins. A game in which all sorts of possible futures – utopian, dystopian, chilling, amusing, depressing, or just plain daft – are mooted. All of our sci-fi dreams, fantasies and fears are voiced, confronted, laid bare.

In the future, all the world’s problems will be solved. In the future, there will be no men, or women, just rocks. In the future, everyone will live underground. Or under glass domes. Or in space. In the future children will run the world. Or robots. Or cannibals. In the future the world will be one big idyllic garden filled with tame animals controlled by computers. Or a constant war zone. Or peopled by clones. In the future, perhaps everyone will disappear, until there are just two people left, standing together, side by side, one man and one woman. Adam and Eve will inherit the earth, and perhaps start the whole darn thing off all over again…

It’s a beautiful thing, this hour of riffing and reflecting. It has a gorgeous rhythm and pace. The pure power of words; a hundred and one ideas portrayed with poetic precision.

Ah yes, words. They’ve always been important to Forced Entertainment. Words and a lot more besides. All of their work, of whatever scale, has elements in common: ‘Lists and games. Gibberish and silence. Dressing up and stripping down. Confession and lies. Jokes and death.’ Their body of work, although constantly returning to familiar themes and tropes, embraces very many ways, and can be loosely divided into two camps: the great big brash ensemble pieces; and the quieter, more reflective duets. The two most recent works by the company, The Coming Storm (2012) and Tomorrow’s Parties (2013), neatly illustrate the case. 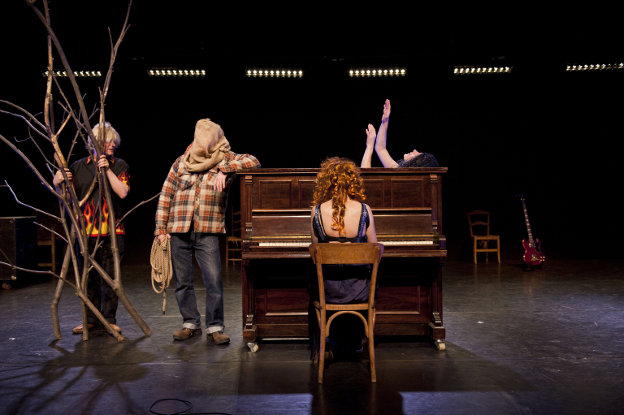 The Coming Storm falls into the big and bold ensemble work category. The key question being investigated in this piece is: What is it that makes a good story? Narratives are set up one after the other by the cast of six, and then disrupted or appropriated by the others. The spoken texts – half-told stories, lists, musings – are only part of the narrative. As is often the case with Forced Entertainment’s ensemble shows, objects tell their own stories: wigs, chairs, sheets, party dresses, a big bunch of twigs, and a rattling old piano tugged hither and thither all play their part in this one. It is said that there are only seven stories in the whole world, and if that’s true, they are all told here – chopped into pieces and thrown into one big stew. Familiar Forced Entertainment tropes emerge: the play between life and death, humour and horror, truth and fiction. It’s a good show, but for me not a great show. Beccy Smith captured the problem in her review of the show on this website: ‘So it’s clever, provocative, sure. Peppered too with easy comedy and pleasant to spend time inside. But it feels straightforward to identify what they are doing, what hypothesis they are testing. I feel I have encountered this question before in their work (most clearly in 2004’s Bloody Mess) and so the experience of the show for me was not so much of treading new ground but rather of revisiting a familiar intellectual landscape, one littered with powerful memories of past incursions to which this exploration couldn’t live up.’

Had Forced Entertainment reached a point where they had said everything they had to say, and were doomed (with supreme irony) just to repeat themselves? It was thus with some trepidation that I went along to see Tomorrow’s Parties. I wasn’t disappointed – finding the show to be one of their best, using familiar devices in a deceptively simple structure, but worked into a beautifully crafted piece of theatre.

Although from the outside it seems that Forced Entertainment have decided to alternate the creation of larger-scale and smaller-scale works, that is not necessarily what’s happening. Spectacular (2008), for example, was originally intended to be a larger ensemble work, but ended up as a piece for two actors ‘by accident’ (as Tim Etchells put it in a 2009 interview with Total Theatre). The company rarely start with a script (Exquisite Pain based on a script by Sophie Calle, was an exception), instead most often starting with improvisations ‘inside a framework of rules’, later annotating and transcribing from rehearsal videos, refining, reworking, and finally scripting. So yes – this is tightly scripted work. Improvisation plays its part in the development, but once developed – that’s it. I find it odd when people in post-show discussions ask if the Forced Entertainment actors were improvising. Far from it, the work is immaculately crafted, finely honed – and as anyone who has seen any of their shows more than once would testify, varies no more or no less from night to night than any other piece of scripted and rehearsed theatre. It was an honour and a revelation for me to see Bloody Mess (which many consider to be their greatest show) three times. Yes, there was a slightly different energy to each show – that’s the point of live theatre – but essentially, what happened on stage was the same each time, even though it seemed at points to be the most chaotic mess imaginably (hence the show’s title). As Tim Etchells put it: ‘Where you see a kind of chaos, or an apparent randomness, in these shows, then it is usually well rehearsed, highly structured.’ 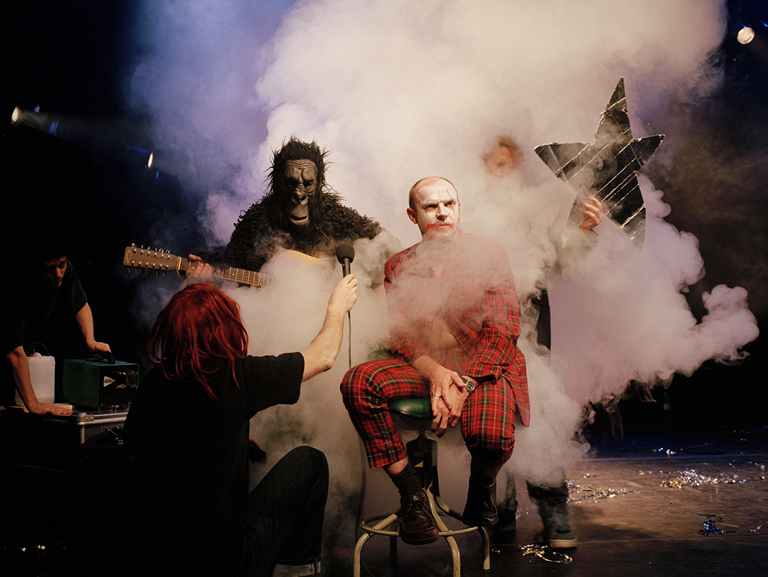 2014 sees the thirtieth anniversary of the company. The Forced Entertainment Theatre Co-operative (as it was originally named) was born in 1984 in Sheffield – where the company is still based. This was a conscious choice – to be away from London, in the North where the resistance to Thatcherism was stronger and where there were large warehouse spaces available for low rents. The same six people have stayed in the company for three decades – five actors (Robin Arthur, Claire Marshall, Cathy Naden, Terry O’Connor and Richard Lowdon, who is also the company’s resident designer) and director Tim Etchells. In the past thirty years, their work has embraced theatre, durational performance, installation, video and digital media. From the whirling frenzy of costume changing that is 12am: Awake and Looking Down to the pared-back precision of Speak Bitterness (the ultimate ‘personal confession’ show); from the durational quest that is Quizoola to the deconstructed variety show of First Night; the everything including the kitchen sink constructed chaos of The World in Pictures to the seemingly simple storytelling of The Travels.

In the past decade or so, the company’s work has mostly been produced with European partners, be they venue or festival. Tomorrow’s Parties is a co-production supported by a whole raft of arts organisations – from Bergen, Hamburg, Brussels, Frankfurt, Zurich and (yes) Sheffield. They are also ‘regularly funded’ by Arts Council England.

In recent years, artistic director Tim Etchells has created his own body of solo work, and other members of the ensemble have pursued work with other companies or collaborators. To anyone who views Forced Entertainment as being all about Tim Etchells, I’d counter that companies do not stay together for thirty years if there is no sense of ownership. Forced Entertainment is a collective of six artists, and all six voices are crucial to the work. Despite the possibilities that technologies afford for collaboration by remote – Internet, Skype etc – which Tim Etchells has exploited to the full (for example, in his collaborative ‘auto-teatro’ work with Rotozaza’s Ant Hampton), Forced Entertainment operate, for the most part, in the good old-fashioned devised theatre way. As Etchells put it: ‘ …[through] months together in a shared space. A space where you can work for long hours and share the air – see where the group is, where it’s headed, see what the interests are.’ 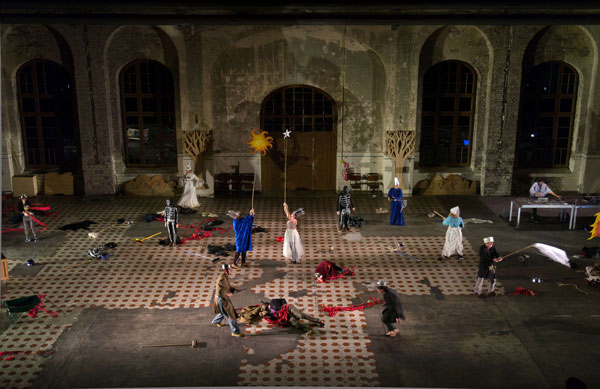 Forced Entertainment, thirty years from their inception, are now firmly established as part of the British and European theatre establishment. There seemed to be a time when they shied away from ‘theatre’, fitting more comfortably in the ‘live art’ bracket – but the world has moved on, and definitions of theatre have broadened beyond the previous restricted views, with devised work an established part of today’s theatre landscape.

What will the future bring? Maybe everything promised in Tomorrow’s Parties, and more! The company are currently launching their latest work – the biggest ensemble piece yet: The Last Adventures is a collaboration with Lebanese sound artist Tarek Atoui and claims to be ‘a performance spectacle on an epic scale”. Working with the largest cast the company have used in some time, The Last Adventures ‘has the visual extravagance of a living art installation or a large scale choreography, while its live soundtrack mixes electronics and live instrumentation to create an intoxicating audio experience.’  As the premier was in Gladbeck (Germany), Total Theatre has yet to see it – but no doubt it will be arriving in the UK very soon!

In the meantime, the company are inviting anyone who wants to join the game to tell them about their experience of Forced Entertainment. Texts can be personal, academic, tightly focussed or free-associating. There’s only one rule: each must be exactly 365 words long. At the end of the year they will select 30 texts for a limited edition book – one word for each day of the company’s existence.  The word is out…

Tomorrow’s Parties was seen by Dorothy Max Prior at The Basement, Brighton, 7 November 2013.

The world premiere of The Last Adventures was at Maschinenhalle Zweckel, Gladbeck, Ruhrtriennale 2012 – 2014 International Festival of the Arts, 5 – 8 September 2013. It featured 17 performers and live music from Tarek Atoui.

For more information on the company and all the shows referenced, see www.forcedentertainment.com

Quotes from Tim Etchells taken from interviews with Dorothy Max Prior and Alexander Roberts for Total Theatre Magazine, published in print editions Vol 20.04 and Vol 22.03. These and other back copies of the print magazine are available to purchase from University of Winchester. Email Christian Francis on info@totaltheatre.org.uk