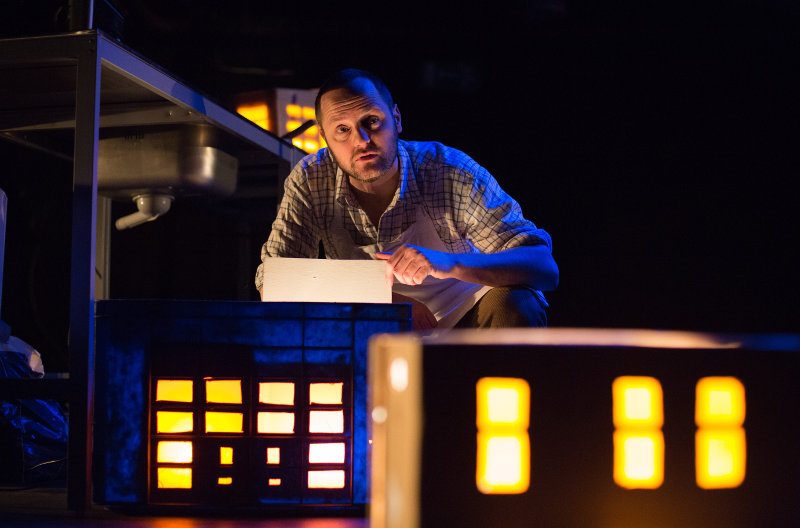 Untied Artists’ remarkable show – a Bitesize commission that won a Fringe First in Edinburgh this year – is a welcome element of London’s Suspense Festival of puppetry for adults.

The central story is of Tom (Jake Oldershaw), an older knackerman responsible for putting down horses that are lame, sick or simply not productive enough to be worth the cost to their owners of keeping them. He has a young apprentice Scott (Jack Trow), who merely told the job centre he wanted to work with animals, and is thus a useful foil for explaining Tom’s work. Tom’s neither callous nor sentimental; he plays air guitar along to the radio when he’s alone in the abbatoir, and he casually despatches rats. But he is a believer in the knackerman’s creed: he takes responsibility for giving the animals a good death.

Overlaid with this narrative thread are voiceovers of people who work with death – doctors, butchers, vets – the unvarnished source material of the piece, perhaps; there are also numerous little inner-lit cardboard houses, each holding a story of a death, or of many deaths, human and animal. These punctuate the piece, each plainly related before its light is extinguished. The radio relentlessly plays snippets of mordant songs, from Folsom Prison Blues (‘I shot a man in Reno just to watch him die…’) to (I Just) Died in Your Arms. The company know very well how to balance these stylised elements with naturalism – stage left is Tom’s kitchen, where he fries real onions; stage right the steel furniture of the abbatoir, where the horses’ blood is pink sand.

And in the midst of this is the central puppet figure – a near-life-size horse, wicker-work and blankets, animated extremely effectively from a simple head control and a rope through a pulley that also serves to suspend it after death. Nothing is more alive than a well-animated puppet, this horse flicking its head, shuffling its feet, looking around its world. Nothing more dead than a puppet slumped to the ground, or hung up to be dismembered.

And this puppet horse dies many deaths as Tom and Scott discuss the ways and the responsibilities of killing. A gunshot to the head may be kinder than a lethal injection, an innovation demanded by modern sensibilities; they demonstrate the difference between the former’s sharp drop and the latter’s slow, slurred, sinking. Tom gives a running commentary of the banalities – simple fears and simple comforts – that he thinks run through the horse’s mind in the seconds before it is shot, making the point, viscerally, that the difference between humans and animals is that we know what’s coming, and they don’t. Scott’s first attempt at putting down the horse goes slightly wrong and the puppetry makes agonising the couple of seconds before he can finish the job.

This discussion inexorably closes in, perhaps slightly too rapidly, slightly too neatly – the show could stand to take more time over its main protagonist’s story – to the question of what makes a good death for a man. The question of who is responsible for making it possible.

It is great to see a show that uses puppetry sparingly, and wisely: to tell the pieces of the story that are best told in this form, to share the moments of life and death that puppetry, by its nature, can illuminate acutely. And to see a show about death that is truthful, complex and utterly unsentimental, and all the more moving and thought-provoking for that.